💉 Brazil’s economy is a disaster 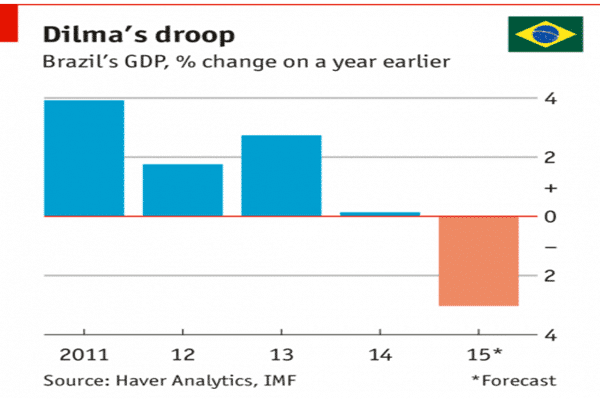 From a wonder economy a few years ago Brazils current populist government is now dragging the new middle class back into poverty. Endless corruption scandals at the highest levels have frightened off existing and  potential investors leaving the country with few options to recover.

Few world leaders have gone to the Paris climate talks for a break. President Dilma Rousseff may be an exception. Two in three Brazilians think her government is doing a bad job. That’s the good news: in August even more did. The economy is tanking: data out today will probably show it shrank by 4% or so, year-on-year, in the third quarter. If legislators do not back a revised target for this year’s primary deficit (before interest payments) in a vote also due today, the government faces shutdown.

Congress is febrile after last week’s arrest of a prominent senator from the president’s Workers’ Party in a bribery probe. And the congressional ethics committee will decide whether to eject the lower house’s speaker for lying about secret Swiss bank accounts.

If it does, he could retaliate by accepting an impeachment motion against Ms Rousseff. Saving the planet? It’ll feel like a holiday.