Pacific Alliance means business, not weighed down by yesterdays ideology 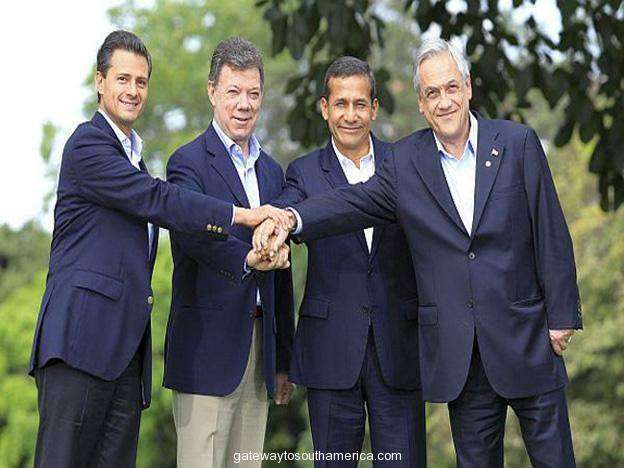 The Pacific Alliance proves that there is strength in numbers and we all have a lot to gain from working together.

We´ve seen this before, haven’t we? Latin American countries coming together to build a bloc that promises to combat U.S. hegemony and bring about radical change in the continent without really saying how they will achieve it. Then along comes the Pacific Alliance, which instead of focusing on ideology and finger pointing, just wants to get down to business.

So what is the Pacific Alliance (AP) that we’ve been hearing so much about lately? Well, to begin with, it is bloc organized by Mexico, Colombia, Peru, and Chile, four countries that have coastlines on the Pacific Ocean and which have joined forces to ensure full freedom of movement of goods, services, capital, and people.

It is significant because the combined weight of the four countries of the Alliance represents 215 million people and 39 percent of Latin America’s GDP, already making the AP the ninth largest economy in the world.

The reason the Pacific Alliance has been in the news recently is because it met last week in Cali, Colombia, to hammer out some details of its continued progress as a bloc. Among the many points the four nations were able to achieve last week was the agreement to drop tariffs on 90 percent of the goods traded among them, with a commitment of removing the final 10 percent within the next year.

In addition to this, the AP also has its eye set on Asia and hopes to become a platform of economic and trade integration by expanding its economic relations with Asia-Pacific, which is a region that has shown great commercial, economic and political activity in recent years.

The participation of these countries, along with the interest expressed by investors from outside Latin America, are perfect examples of the positive business climate the AP has been able to foster and encourages the fact that the bloc is serious.

So let’s get back to what’s actually happened so far, because like I said, what really makes the AP attractive to investors is its focus on trade, investment and immigration, as opposed to politics and ideology.

We’ve already mentioned the advances made toward Free Trade among the member countries. What hasn’t been mentioned is the effort to merge the stock markets of Peru, Chile, Colombia to create MILA, the Mercado Integrado Latinoamericano. With the addition of Mexico in the next 12 months, Mila would surpass Brazil’s Bovespa as the largest stock market in the region.

Integration seems to be the hot-button word behind the AP model. So, how might the AP help integrate the economies of the four countries? I read a great example of how it might work earlier this week.

Let’s say Chile has the climate and infrastructure to make great wine but the Mexicans make the best fertilizer, the Colombians develop a more efficient way of making glass and the Peruvians have found a way to design and produce the best labels and corks.

If Chilean winemakers buy the Mexican fertilizer and link up with Colombia’s glass makers and Peru’s label makers, together, they can produce a better, less expensive bottle of wine.
Value chains like the one from this example are Latin America’s best chance of competing in Asia.

That’s why the four countries have dropped visa requirements with each other and will likely create a joint visa system (Visa Alianza del Pacífico) that will allow tourists to visit all four countries on just one visa.

Yes, the Pacific Alliance is much more than another in a long line of regional blocs like UNASUR, MERCOSUR, ALADI and CELAS, which have not lived up to expectations because they were bogged down by differing ideology and thorny bureaucracies . 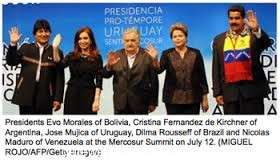 The new boys on the “bloc” are set on continuing an ongoing process to create a deep integration among the nations of Latin America so that it can better engage with the rest of the world.

As the Economist said, this alliance is about what one thing— hard-line business deals.