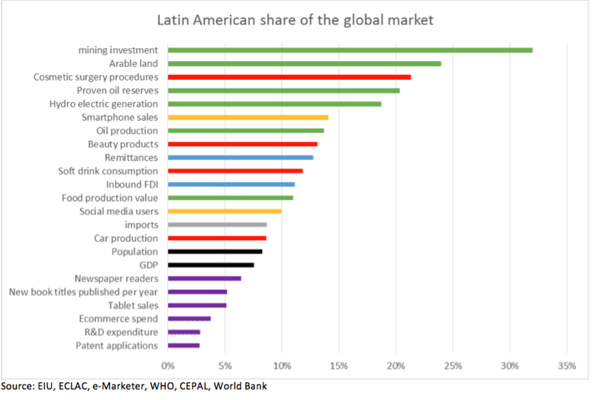 Gateway to South America on 30/09/2014 - 13:55 in All categories of countries are, Argentina-General, Chile – General, General of Uruguay, Perú-general en

(This article was written by John Price, the managing director of Americas Market Intelligence)

If the Latin American market could be symbolized by one single character, the California Valley Girl might fit the bill. It’s a simplistic, even insulting stereotype, but one that stands up to statistical scrutiny, specifically an analysis of Latin America’s share of the globe in different product usage, asset classes, and investment flows.
After a decade of impressive growth and strengthened currencies, Latin America is today a middle income region with roughly 8% of the world’s population and 8% of its GDP. Where Latin America performs above or below the 8% share of the globe is indicative of its relative strengths and weaknesses

If the Latin American market could be symbolized by one single character, the California Valley Girl might fit the bill. It’s a simplistic, even insulting stereotype, but one that stands up to statistical scrutiny, specifically an analysis of Latin America’s share of the globe in different product usage, asset classes, and investment flows. After a decade of impressive growth and strengthened currencies, Latin America is today a middle income region with roughly 8% of the world’s population and 8% of its GDP. Where Latin America performs above or below the 8% share of the globe is indicative of its relative strengths and weaknesses

In spite of security concerns, Latin Americans like to parade their status. Luxury goods outperform in the region if the calculation includes luxury goods purchased by affluent Latin Americans when they travel abroad, in some categories and brands garnering 15+% of global sales. According to the Financial Times, the number of retail luxury stores in Latin America grew 24% from 2011-13, more than any region in the world. Latin American credit card spending, which grew at CAGR levels north of 20% over the last decade has done wonders for the mass luxury segment.

Latin Americans love to chat. Brazil is now the 3rd largest mobile phone market after China and the US. Brazil and Mexico are Facebook’s 3rd and 5th largest markets respectfully. More than any other emerging market region, Latin Americans are heavy long distance diallers. Many of their international calls are with relatives abroad (mostly the US) that send over $60 billion per year to the region. Latin America is the most developed remittance market in the world.

While Latin Americans love their mobile phone, they are less enamoured with computers and tablets. The sale of both items underperforms in the region. Similarly, software sales, both to consumer and business do poorly in Latin America. One obstacle to both hardware and software sales is the lack of credit cards and other forms of financing available to 70% of the population. Purchasing a $2,000 computer with cash is a daunting challenge for someone earning only $10,000 per year. Software companies are also afraid of piracy. Anywhere from 50-80% of computer software used on personal computers in Latin America is pirated. Some global software firms stay out of the region altogether. Only a handful make the necessary investment to translate into local language, much less support sales with a robust distribution model and technical support. A recent McKinsey study showed how productivity gains in large Mexican firms outpaced those of smaller firms. The differentiator is technology, which larger firms adopt at a faster pace.

Latin Americans are known for their creativity in the arts and even in business where complexities must be ingeniously navigated. But all that creative energy produces little in the way of marketable ideas. Latin America is responsible for a paltry 3% of R&D spending and yield a similar level of patents. There are universities in the USA that singlehandedly produce more patents each year than all Latin American academia, government and private sector efforts combined. Too many Latin American inventors and designers migrate abroad (usually to California) to develop their ideas because they have little faith in the legal defense of their patents and trademarks at home.
Less understandable is Latin America’s underperformance in all things written. The region’s publishing industry continues to fall behind the rest of the world, publishing only 5.2% of the world’s titles, many of which are translated versions of original works written elsewhere. In Mexico, there is only one bookstore for every 70,000 people. Latins read fewer newspapers than the rest of the world, printed or online. E-publishing and reading is even less prevalent, whereby Latin America contributes less than 1% of the global market. What is most galling about these statistics is that Latin American governments spend heavily on public education. Argentina, Brazil and Mexico governments all spend a higher percentage of GDP on schooling than Canada, Germany,China, Russia or Japan.

International trade is a bit like love in that opposites often attract. Not surprisingly, the Valley Girl (LatAm) has taken to dating its opposite: a less resource endowed, unglamorous, penny pinching, tech savvy, highly studious older fellow known to the world as China.

This article was sourced from the September edition of Latam News, the monthly newsletter of the Australia-Latin America Business Council (www.alabc.com.au