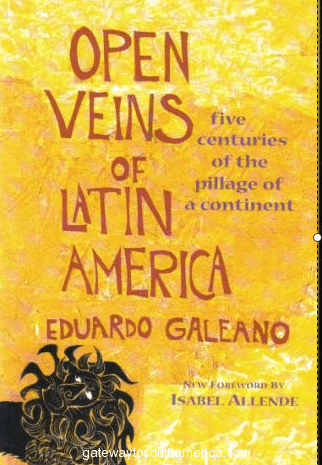 This translated book begins with a foreword by left-wing writer Isabel Allende, and here is  just one quote from her  introduction of the book:

“His work is a mixture of meticulous detail, political conviction, poetic flair, and good storytelling.”

The translation by Cedric Belfrage merits special note. This book sings in English, and the translator has done justice to the original.

A major recurring theme throughout the book is that of capital squandered by the few while the many actually producing the capital dies of hunger or disease.

Early on the author makes these points:

1. The indigenous bourgeoisie is the ones who have sold out their countries to the multinational corporations. Toward the end of the book re repeats this with a chapter on the guards that opened the gates.

2. “The human murder by poverty in Latin America is secret–every year, [the equivalent of] three Hiroshima bombs.”

3. Quoting Lyndon Johnson: $5 invested in population control is equal to $100 in economic growth. This is the context of the author making the case that Latin America is under-populated in relation to Europe.

4. Imperialism and predatory capitalism depends on, imposed, inequality and growing disparity on the countries rich in raw materials.

His early account of the European invasion by steel and horse and disease was unique in its time; see 1491 below for a broader more recent treatment. The indigenous population by this account dropped from 70 million to 3.5 million.

1. The historical record is a lie–laws were indeed passed protecting the indigenous natives but never enforced, something history does not document as well.

3. Spanish dressed up the natives in Andalucian costumes, some of the clothing we think of today as traditional was actually imposed on the natives.

4. Spanish and others moved drugs (coca) from strictly ceremonial use to the general population and then into massive export.

The history of Latin America is a history of sequential pillaging. First gold, then sugar, then rubber followed by chocolate, cotton, and coffee, then the banana–the tree of hell under United Fruit. And then Chilean nitrates, Bolivian tin, and finally the “black curse” of petroleum.

Sugar is particularly devoured both the soil and humanity, first in Brazil than in the Caribbean.

The ready use of slavery, both of indigenous natives and of imported Africans, created the economic bottleneck that survives to this day, where those actually extracting the raw materials are virtual slaves and do not derive the fruits of their labour.

The author contrasts the manner in which the US used the Homestead Act to grant land to individuals who were incentivized to develop the West and the latifundo oligarchy that imposes perpetual poverty on generations of indigenous individual families.

The book is a catalogue of all the dictators supported by the USA and enriched by US and European multinational corporations.

The second half of the book yields the following notes:

1. Industrial infanticide has been imposed on Latin America by protectionism and free trade (as opposed to fair trade)

3. The International Monetary Fund (IMB) is the knife that slits the belly of each country to let in the maggots of immoral capitalism.

4. The Ministries of Labour in each Latin America country are the new slave traders.

5. “International charity does not exist.” The role of US aid is to help the US domestically. As of the book being written, only 38% of aid was actually targeted aid, all the rest existed to bring greater benefits back to the “giving” country.

6. What Latin America has been lacking all this time is a sense of economic community within its own continent.

7. As the book has a left-wing perspective and considerable misinformation it was banned  under the military governments of Brazil, Chile, Argentina and Uruguay

Page 261. The task lies in the hands of the dispossessed, the humiliated, the accursed. The Latin American cause is above all a social cause: the rebirth of Latin America must start with the overthrow of its masters, country by country. We are entering times of rebellion and change.

Page 285. “The system would like to be confused with the country.” and “In these lands, we are not experiencing the primitive infancy of capitalism buts its vicious senility.”

Notes and index complete the work. A solid four hour read without interruptions. A great book for anyone desiring to know why the USA is being pushed back while China and Iran are displacing the West in the southern hemisphere.

The late Venezuelan President Hugo Chávez gave United States President Barack Obama a copy of ‘Open Veins of Latin America’ as a gift at the 5th Summit of the Americas in 2009. As a result of this international exposure, the book’s sales are reported to have risen sharply—it was the 54,295th  most popular book on Amazon.com on one day, but it moved to #2 on the list a day later. Read with a open mind.