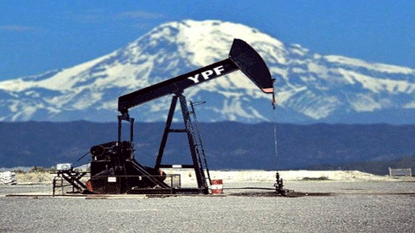 Gateway to South America on 22/07/2014 - 11:07 in All categories of countries are, Argentina Mendoza, Argentina-General, Argentine farms, Commercial Argentina

Holders of Argentina’s defaulted debt and their supporters have warned the country risks being frozen out from international capital markets unless it finds a way to solve its legal problems by the July 30 deadline.

But away from the bad-tempered litigation in US courts, the country is experiencing an oil-drilling boom as multinationals seek to cash on its huge shale resources.

In June, there was an average of 107 rigs drilling for oil or gas in the country, the highest number operating since records began in 1982, and more than double the number at the start of 2012, according to Baker Hughes.

Most were hunting for oil rather than gas. Oil-based exploration explains most of the activity boom. Drilling giants like Nabors Industries have some of their largest and most modern rigs contracted to work in the country.

Helmerich & Payne has 10 of its rigs in Argentina, accounting for a third of its total drilling fleet outside North America, according to a recent investor presentation.

And a host of smaller drillers are in the country, mostly working on the Vaca Muerta (Dead Cow) and Los Molles shale formations in the Neuquén basin near the Andes in central Argentina.

“The shale play in Argentina is unique because of the rock. It’s thickness. Argentina has kind of won the geological lottery,” a spokesman for Chevron told Reuters in May.

“Vaca Muerta is like one big cake, 1,000 feet (305 meters) thick in places, which means one well can be much more productive.”

Chevron has a joint venture with Argentina’s state-owned YPF to develop shale oil and gas in the Vaca Muerta.

“Vaca Muerta could become an important contributor to Chevron’s long-term production growth,” the company emphasized in a press release in April.

Neuquen is a long-established oil and gas-producing region and Vaca Muerta was the source for much of the oil and gas found in conventional reservoirs in the area.

Vaca Muerta therefore shares many of the characteristics that made the Bakken, Eagle Ford and Permian shales in the United States so successful: organic-rich shales with low clay content in areas that had already produced oil and gas and that had an established infrastructure.

In its comprehensive assessment of global shale resources, published in 2013, the US Energy Information Administration estimated that Argentina has the world’s second-largest resources of shale gas (after China) and fourth-largest shale oil — after Russia, the United States and China.

Argentina’s technically recoverable shale gas and oil resources amount to just over and just under 10 percent of the world total respectively, according to the EIA.

Argentina is thought to have more shale oil than the United States — which could potentially push it into the ranks of the world’s biggest oil producers.

Nearly all this shale oil and gas is contained in the Vaca Muerta and Los Molles shale formations. The Neuquen basin therefore ranks as one of the most highly prospective shale plays in the world and one of the most likely to be developed outside North America.

While the below-ground geology is highly favourable, the above-ground obstacles to large-scale development are formidable.

Argentina’s history of political and economic instability, serial debt defaults, devaluations, and expropriation of foreign property, including the recent nationalization of Repsol’s holding in YPF, make outside investors wary.

But the prize is enormous, too big for international oil companies to ignore, and the country’s politicians, from the president downwards, show a strong awareness of the need for foreign capital and expertise to develop what could be a transformational national asset.

Fortune favours the brave, as oil companies can attest. The biggest prizes globally are all in tough political environments (Russia, Iraq, Iran, Mozambique) or geological ones (China, Brazil, Arctic). In this company, Argentina’s oil and gas resources do not appear especially risky.

Apache, EOG, ExxonMobil, Total, YPF, Chevron and several smaller companies have all already been active in the Neuquén basin.

For the next few days, investors will remain transfixed on the unfolding story of whether or not Argentina will pay its holdout bondholders, find a way to pay exchange bond-holders despite the rulings of the US courts, or default.

Bond specialists have described the prospect of default as a “catastrophe” that would shut the country out of international financial markets and send the economy into a tailspin, according to the Financial Times.

That assessment is almost certainly overstated. Bondholders always talk tough about the consequences of default. There is a long history of sovereign defaults around the world and no indication defaulters pay a significant penalty after a couple of years.

In the medium and long term, the success, or otherwise, of oil and gas production from the Neuquén basin is far more central to the country’s prospects.

Argentina’s future will be determined not in New York’s courtrooms but by whether drilling firms can figure out how to unlock commercial quantities of oil and gas from its thick shale, and whether the government can provide them with a sufficiently stable environment to get on with the job.