Oil found in Uruguay by Petrel

Gateway to South America on 25/10/2013 - 11:08 in All categories of countries are, General of Uruguay, Uruguay Farms, Uruguay Farms 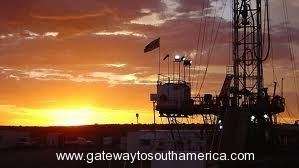 The former Molopo Energy boss Stephen Mitchell and former Eastern Star Gas chief David Caseys’ latest venture is to test the Uruguayan nation’s onshore shale potential. So far it is off to a promising start as it’s at the forefront of efforts to test at this point.

Yesterday Petrel Energy confirmed the existence of oil generation from drilling on its ground in the South American nation’s Norte Basin. The chief executive who is also the biggest shareholder of the company with a 9.2% stake, Mr Casey, said “While more work is still required, further confirmation of an active hydrocarbon system in the second Permian source and reservoir within these shales more than 100km from the Canada de Charrua well . . . is very encouraging.”

Shale was identified earlier this year in the Uruguayan region by national oil company ANCAP who drilled the core hole Canada de Charrua.

As a result of Petrol shares slowly increasing the company now has a market value of $50 milllion (USD) as on the 16th of October the shares finished up 0.05c to 13c.

Recently Uruguay’s onshore shale has attracted other companies such as France’s Total and now Argentina’s recently nationalised YPF after Petrel and its operating partner Scheupbach Energy were early movers in Uruguay.

Mr Khaliqi said “We eagerly await the results of a second core hole given the positive results at shallower depths from ANCAP and the preliminary results from the first core, which shows the potential for oil generation in the basin is deeper.” And added that he was hoping for results in about four weeks.

Cerro Padilla, the second hole, has been delayed in digging at this point because the equipment being supplied by the local contractor was the wrong type.