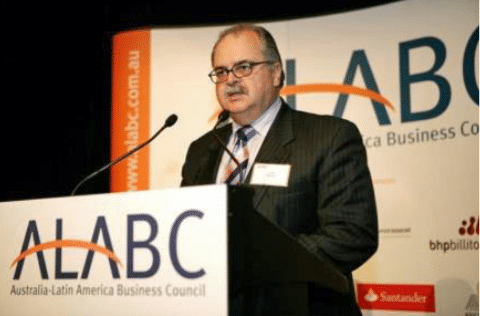 In times of market volatility, low economic growth and heightened uncertainty, it is essential to have a steady hand on the wheel and to be able to see beyond the current turbulence. There is no shortage of bad news on the global economic front and the worsening economic situation in Brazil and Venezuela, plus other strains arising from the fall in commodity prices and flow on effects, mean that the Latin American region is coming in for its share of bad publicity.

However, I firmly believe that beyond the current headlines there is also ample reason for optimism as regards the region’s future. Positive change is taking place and reforms that are being implemented and developments that are taking place in most countries are setting the foundations for more stable government, greater accountability and more sustainable growth.

I draw great encouragement from developments as diverse as Argentina’s election of Fernando Macri to the presidency – a result that brings a dramatic change to the nation’s political and economic direction; the narrow, but nonetheless decisive outcome of the Bolivian referendum that has rejected the attempt of incumbent president, Evo Morales, to bring about a constitutional amendment that would have let him run for a fourth consecutive term in 2019; and Ecuadorean President, Rafael Correa’s decision not to contest the 2017 presidential election.

The strong prospects for a peace accord with the FARC in Colombia also augur well for a new era of stability and economic growth in one of the region’s most promising nations. Equally positive developments are also taking place elsewhere in the region, as highlighted in some of the articles featured in this month’s newsletter.

As experience in Mexico has shown, reforms do not come neatly packaged or without varying degrees of struggle.

Chile’s government is pressing ahead with reforms that have generated considerable debate and widespread opposition from much of the business community, but I believe that the nation will be all the stronger for going through this round of renewal and introspection. Chile has been at the forefront of political and economic reform for the past few decades and the current round is grappling with very contentious issues, but the democratic process is working well and the foundations are in place for Chile to continue being one of the best business environments and investment destinations in the region.

Most of the major countries in Latin America have entered into a period of what I believe will prove to be long-term macroeconomic stability. They are striving to create a more conducive environment for business, through strengthening legal frameworks and combating corruption. Change is underway in Latin America, and the most persistent markets will undoubtedly amass the greatest benefit. The process will take time and will not be without its setbacks, but there will be pay back for those countries that stay the distance.

Within this context, it is worth noting that a growing number of Australian businesses are responding to the more challenging domestic operating environment by re-evaluate their operating strategies and acknowledging that the way forward involves more international engagement rather than less.

Although there are no published statistics, the anecdotal information available to me suggests that the last few years have seen a strong growth in the number of Australian businesses looking at Latin America. Nowhere more so than in the resources sector, where I believe that there has been a sizeable move by miners and METs players from the African continent to the Latin American region.

The growth in enquiries about Latin America extends to other sectors and to markets beyond the traditional Chile-Peru-Brazil focus, but has largely gone unreported, with most companies choosing to go about their business without drawing too much attention to themselves.

One challenge that Australia needs to address if we are to benefit from Latin America’s future prosperity is increasing the number of business leaders that have the requisite Latin American knowledge to be able to assess and to act upon the developments taking place in the region. Those businesspeople with regional credentials need to rise to the challenge, to speak up for engagement with the region and to hoist their corporate flags in support of the region.

Individual action is welcome, but cannot deliver the bilateral and multilateral benefits that can only come through collective and coordinated action.

This article was sourced from the February 2016 edition of Latam News, the monthly newsletter of the Australia-Latin America Business Council (www.alabc.com.au