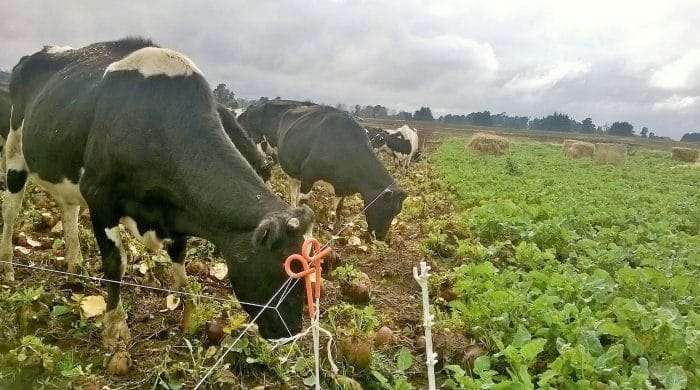 Dairy farmers in southern Chile say Fonterra’s continuing underpayment for their milk has left them little choice but to build their own processing cooperative.

The next step was to raise US$10-12 million to build a processing plant.

Chilterra is a Chilean company in which New Zealanders have a significant, but not controlling, shareholding.

With nine farms, it is a big supplier to Fonterra’s ingredients business in Chile, Prolesur, which operates in the south of the country.

Soprole said it sourced about 30 per cent of its daily fresh milk from Prolesur.

Latest Chilean industry figures show milk supply to Prolesur has been steadily falling since 2015, when the company had 24 per cent of the milk market. In 2007-2008 it had 26 per cent of the market. Today it has 19.5 per cent.

In contrast, milk supply to Chilean cooperative Colun has risen steeply since 2015 and it now has 27.4 per cent. The other big two milk companies in Chile are Nestle, whose supply has also been declining, with a market share of 18.3 per cent, and Watts which has 13.9 per cent and relatively flat supply.

Fonterra responded: “Prolesur’s milk collections have decreased in the last year…Prolesur’s market share has declined slightly as it moves away from winter bonus payments and encourages its farmers to stick to a pasture-based farming model.”

He said supply to Fonterra has been falling because farmers are going bankrupt and getting out of farming.

“Fonterra, Nestle and Watts lead the milk price and they keep driving the price down.

“Fonterra is taking advantage and making massive profits. For the 200 pesos a litre we receive for our milk, almost 100 pesos comes back here (New Zealand) as dividends.”

McBeath said Fonterra takes advantage by setting its milk price at export price level which is lower than milk fetches on the domestic market. But it sells to the local consumer market.

“They transfer everything out to Soprole which shows a big profit.”

Fonterra, in a written response, said Chile was a net importer of dairy products.

In contrast to the 200-220 pesos a litre Chilterra has been paid in recent years, Colun suppliers received around 330-345 pesos a litre, McBeath said.

He said 200 pesos was equivalent to about $5.70 kg milksolids in New Zealand but climate required Chilean farmers to buy a lot more supplementary feed out of their milk price than Kiwi farmers. Fonterra’s New Zealand forecast milk price this season is $6.75/kgMS.

“A farmer can’t reinvest to develop, can’t upgrade their facilities. So he lets it all run down, he sells his capital stock in order to survive and before he knows it, he’s bankrupt. That’s why all these farms have closed.

“This is about Chile and Chilean people. New Zealanders are the visitors.

“If we are going into Chile we need to say we’re going to support you to grow – not we’re going to come in and take as much profit from you as we possibly can. And that’s what’s happening – we are killing the local farmers.”

Fonterra did not respond to the allegation that its market behaviour towards suppliers was bringing Fonterra and New Zealand’s reputation into disrepute.

Addressing questions about prices it paid to south Chilean farmers, Fonterra said similar to New Zealand farmers, Chilean suppliers were paid depending on the levels of milk solids, quality and other contract variables.

“The current average milk price is approximately NZD $6.40 per kgMS, down slightly from $6.50 per kgMS last year. The payment systems are not identical, so shouldn’t be compared like-for-like.”

“To support supplying farmers to stay on this system, Prolesur provides them with technical support in pasture management, animal nutrition and genetic improvement.”

Chilterra director and shareholder Roberto Santamaria, speaking from Chile, said Chilterra was developed on the premise that Chileans and New Zealanders “would be able to embrace a wide-ranging partnership that would be beneficial to our countries and our communities”.

“We have watched, with lots of hope at the beginning and with dismay later on, how Fonterra took control of Soprole/Prolesur and later on, instead of following the cooperative approach we all expected, evolved into a short term profit-taking entity.

“Don’t take me wrong – profit is a motivator for all of us, but not at the expense of the long-term development of our sector.”

McBeath said his approaches to Fonterra leaders on the issue have fallen on deaf ears.

“We know if we build our own factory we can add 100 pesos to our bottom line and have money left over.”

Its general manager declined to comment on Fonterra, but confirmed milk supply to Prolesur had been declining.