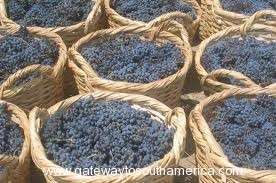 With the Chilean table grape export season almost over, resulting in 731,851 tons up to week 25,  this figure is only 811 tons lower than the total exported in the previous season. This is is a good sign, certainly when considering the rains that affected the late varieties harvest in the Chilean central-south zone.

Although major changes in the export distribution per market have not been reported, apart from the lower exports to the U.S. and higher exports to Asia, the main news this season is given by the new increment recorded by the Chilean patented table grape varieties. It must be remarked that since the 2014/15 season, this group of varieties presented a notable and constant increment in the shipments, after four seasons without major changes in the export figure that remained constant between 11,000 and 12,000 tons, as shown in the following chart. 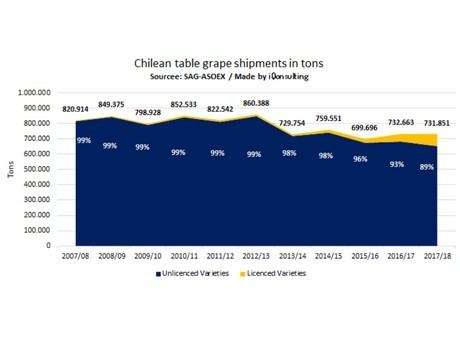 Despite the increment in the exports already shown in the previous season by this group of varieties, when they reached 50,000 tons, double of what was exported in 2015/16, in the current 2017/18 season the figure was 79,500 tons; 59% higher than the previous season. 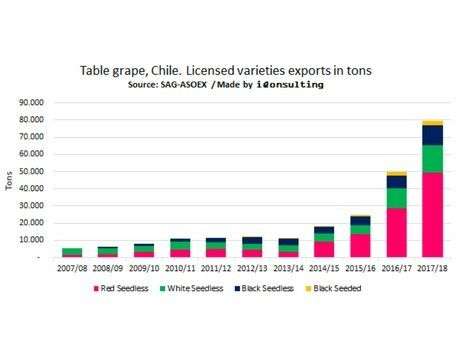 With respect to the export of Chilean table grape patented varieties, the Red Seedless grapes account for 62% of the total exports, followed by the White Seedless group with 20% and the Black Seedless with 15%. The main destination markets are the United States (74%), China/HK (8%), England (5%), South Korea (2.4%) and Japan (1.8%). Finally, we must highlight the fact that this patented varieties group is plenty diversified, with more than 50 varieties exported in the 2017/18 season, and 17 varieties that recorded exports above 1.000 tons. The three main exported varieties were Timco, Sweet Celebration and Arra 15.