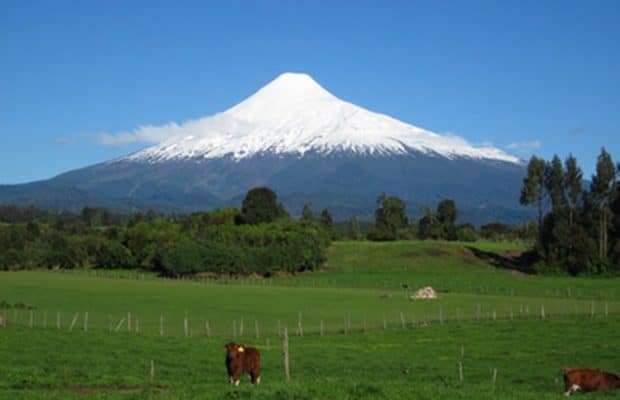 Tetra Pak – the world leader in packaging for the dairy industry – reveals in its Dairy Index for 2014 that, largely due to population growth, increased prosperity and increased urbanization in Africa, Asia and Latin America, demand for dairy products will grow, benefiting dairy producing countries and making for a new investment opportunity.

To date, Chile is world renowned for large copper mines in the north of the country and for the excellent wines of the central area. Today we are invited to discover other investment opportunities in the south – the area called Los Lagos – where livestock farms and milk producers flourish, thanks to the favorable climate and rainfall, and the beautiful scenery overlooking the Andes Mountains, with its snowy peaks and pristine skies.

Located in the southwest corner of South America, Chile surprises with a varied geography that has been shaped by mountains, valleys, deserts, forests and thousands of kilometers of coastline. These geographical conditions, combined with a privileged climate, have provided impassable health barriers that help maintain the optimal quality of its agricultural and forestry products. It is a country free of pests, due to the natural barriers that protect and transform it into an island healthy for plants and animals: the Atacama Desert to the north, the Andes Mountains to the east, the Pacific Ocean to the west and glaciers in the south. 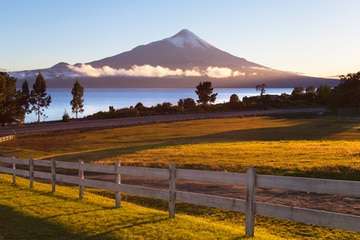 The Lakes region is one of the fifteen areas into which Chile is divided, bordered in the north by the Rivers region; east, with Argentina; south, with the Aysén region; and on the west by the Pacific Ocean. Its southeastern section, which corresponds to the province of Palena, is located in Chilean Patagonia. It has a total area of 48,583.6 square kilometers and its projected 2015 population was 841,123 inhabitants. The region consists of the provinces of Chiloé, Llanquihue, Osorno and Palena, and the regional capital is the city of Puerto Montt.

Characteristics of the region

The Lakes region is known for its abundant nature and a large number of protected areas – both public and private – with a focus on tourism activities and oriented towards tourism interests.

Highlights are the activities of rural tourism: fly fishing and bird watching, as well as flora and fauna in general, and other adventure sports such as rafting and kayaking, two activities that attract worldwide interest, thanks to the quality of the rivers and lakes.

In the nineteenth century, the region was colonized by German, Swiss and other European peoples, who contributed to and enriched the culture and way of life throughout the region, especially in Puerto Montt, Osorno, Frutillar and its surroundings. A strong presence of these influences can still be appreciated. In short, it is an idyllic landscape in which to live, invest and do business.  Testimonials. 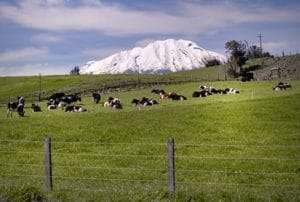 The region of The Lakes. Chile

Chile has more than 6,000 small, medium and large commercial producers of milk, especially concentrated in the regions of Los Rios and Los Lagos. The country has a modern dairy industry and has a million hectares of grassland and 500,000 dairy cows. There are twenty large dairies, including several multinationals, and nearly a hundred medium and small-sized cheese factories. Milk production reaches 2,650 million liters and produces 130,000 tonnes of cheese and 100,000 tons of milk powder and other derivatives. Dairy consumption in the country is about 150 liters per capita annually and is also an important aspect of foreign trade. Here is a selection of those farms.

As a result of political and economic stability, trade liberalization, legal certainty, and excellent growth projections, Chile has maintained an attractive and dynamic environment for business investors. According to the ranking on Business Environment developed by the Economist Intelligence Unit (EIU), Chile was among the 20 most attractive economies for doing business in the horizon 2010-2014, topping the Latin American region.

Chile is evaluated as the best among the emerging economies of Latin America and one of the most recognized worldwide. The sustained economic growth of the country and its progress in social development have been highlighted by various international organizations. Indeed, in 2010 Chile was the first South American nation incorporated as a member of the Organization for Economic Cooperation and Development (OECD).

The World Economic Forum recognized Chile within the 20 countries with better macroeconomic environments in the 2013-2014 Global Competitiveness Index. This pillar mainly measures the country’s economic stability and competitiveness factor among 144 economies. In the overall ranking, Chile was ranked No. 34 and remains the most competitive economy in Latin America.

According to risk ratings published in 2012 by The Economist Intelligence Unit (EIU), Chile is one of the lowest risk countries in the world. For its part, the rating agencies give high ratings in sovereign credit rates, highlighting the low levels of public debt, the integrity of a country’s institutions and a healthy financial system.

According to the Technological Readiness Index 2012 of the World Economic Forum, Chile is a leader in the region and ranks 39th among 142 countries, thanks to advances in digital connectivity and the presence of new technologies. The country has a modern network of roads, hospitals, ports and airports, among other works, the result of an investment of more than US$10,000 million in infrastructure.

According to the report Doing Business 2013, published by the World Bank, Chile is the Latin American economy with which it is easiest to do business, ranking 62 places above the regional average.

Chile has in place bilateral treaties with over 20 countries to avoid double taxation, and its tax system is transparent, competitive and extensively computerized.  Sources

Since its enactment in 1974, most large foreign investors have used the Foreign Investment Statute (DL 600) to enter the country’s capital, a mechanism under which an investor signs a voluntary agreement with the State of Chile – establishing guarantees and rights and authorizing the transfer of capital or other forms of investment to the country. This mechanism is administered by the Foreign Investment Committee.  Source.

There is also, as an alternative mechanism, Chapter XIV of the Compendium of Foreign Exchange Regulations (CNCI) of the Central Bank of Chile, with which foreign investors must register in order to protect their investments under that law.  Source.