A new game plan for Argentina ? 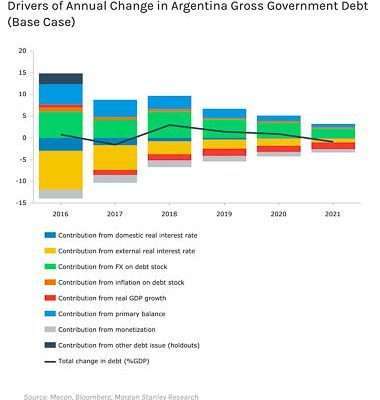 Eight years after being downgraded to a frontier market, Argentina seems poised for a turnaround, one that offers investors long-term opportunity and returns.

Argentina was never so visible as when Diego Maradona led the nation’s soccer team past West Germany to win the World Cup championship in 1986. It seemed emblematic of a country on the cusp of claiming its rightful place on the global stage. Things haven’t quite gone as planned. Over the past 30 years, Argentina has dealt with bouts of economic crisis, a prolonged public dispute over its debt repayments, double-digit inflation and a series of political scandals.

However, the 2015 presidential victory of Mauricio Macri may mark a turning point, with a focus on reform to revitalize the economy and win back the confidence of investors at home and abroad. “We believe Argentina will fully normalize its economy in the next five years, generating a virtuous cycle that lifts long-term growth as it becomes an investable market,” says Fernando Sedano, Morgan Stanley’s Latin America Economist, adding: “Argentina is a long-term investment opportunity for fixed-income and equity investors.” In a recent Blue paper, Sedano and his colleagues outline why they believe Argentina can achieve macroeconomic stability—and a return to emerging-market status—and what that means for investors. 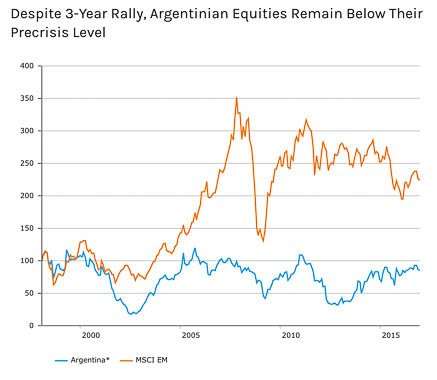 Their base case forecast for the next five years implies an 18% compound annual growth rate for equities, as well as an 8% annual return in the bond market. What’s more, having lost its emerging market status nearly eight years ago when it effectively defaulted on its sovereign debt, Argentina is on track to re-join its former cohort on key emerging-market indices by 2018, which would further bolster its prospects. Such a comeback assumes that Argentina can achieve what Sedano and his colleagues call “the Virtuous Cycle of Economic Growth,” where annual GDP could improve from its recent 0.9% growth rate to 3.1% over the next five years.

“A strong commitment to macro-rebalancing is a necessary condition for our call to play out, especially if harsher global liquidity conditions hit sooner rather than later,” says CoHead of Latin America Economics Arthur Carvalho. A Macro Game Plan Despite the hangover of the 2014 debt default, Argentina’s current government has made quick and significant strides to address macro imbalances. Chief among these: Executing a smooth devaluation of the currency (the Argentine peso), strengthening foreign-exchange reserves, and eliminating capital and import restrictions, among other steps that are helping to restore confidence in the country’s financial foundations. Major challenges remain, with two in particular: reducing inflation and unwinding fiscal deficits. On the former, the new Argentine government says it can slash inflation from roughly 40% today to the single digits by 2020, with a combination of monetary tightening and a floating exchange rate. Although inflation spiked in the first half of 2016, following the peso devaluation and a sharp increase in utility prices, the strategy began to show signs of success in the latter half of the year.

On the issue of fiscal deficits, Argentina seems to be overcoming its old habit of printing money to cover its deficits. Central bank transfers are expected to have been 2% of GDP in 2016, down from 3.3% of GDP in 2014. The new administration has also made progress toward normalizing regulations within its government energy distribution sector, clamping down on off-shore (tax-free) bank accounts and bolstering private investment. In 2017, a new electricity tariff proposal, if ratified, could send investors a powerful reform message. Now that the administration has addressed many macro imbalances, Morgan Stanley economists believe the focus should shift toward longer-term structural challenges. “We are confident that Argentina will push reforms to boost its capital market infrastructure in order to absorb foreign capital and ultimately attract more foreign direct investment,” Sedano says. New Era for Equity The potential for reform under Macri hasn’t been lost on investors. “Argentine stocks have posted 100%+ gains since 2013, as investors anticipated better reform prospects after the 2015 presidential election,” notes Guilherme Paiva, Morgan Stanley’s chief equity strategist for Latin America. Even with these gains, however, Argentina’s equity market remains below levels seen before its 2001 financial crisis, which also resulted in a debt default. It has also underperformed the broader MSCI emerging-market index by 140 percentage points over the past 15 years. 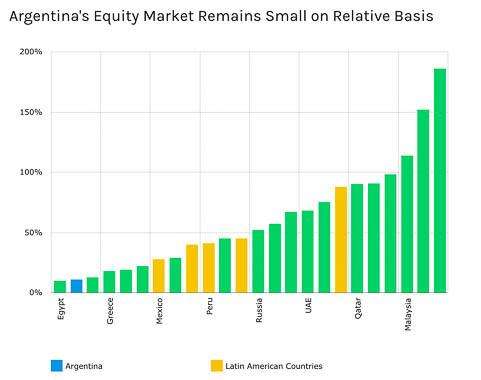 Now, following a relatively lackluster 2016, Argentine equities are ready for the next stage of recovery. “The investment thesis for Argentine equities was about regime change in 2015 and lower country risk in 2016,” says Paiva, who notes that, at 11.7 times, the forward price-to-earnings ratio of the local equity market is now in line with its 14-year historical average. “In 2017 and 2018, we think it will be about earnings growth,” he says. The main barrier to growth, says Paiva, has been the dearth of capital. Even strong companies struggle to grow when they have limited access to capital, and investors feel little conviction. Up until recently, those conditions have choked profitability, which has yet to return to pre-2001 levels. Still, even modest improvements in profitability—from 1.8% to 5% over a four-year period—would imply earnings growth of more than 100% over that period, Paiva says.

Meanwhile, Argentina’s stock market capitalization is still relatively small. At around $61 billion, it’s only 11% of the country’s projected 2016 GDP of $538 billion, leaving Argentina with the second smallest equity market capitalization—just above Egypt—in the emerging markets universe. “We see ample potential for new issuance, especially in financial and consumer stocks,” Paiva says. “We believe overall market capitalization in Argentina can more than double over the next five years if we consider new listings and price gains.” An external vote of confidence in Argentina’s reform efforts would also help. A potential MSCI upgrade of the Argentine equity market from “frontier” to “emerging market” status, for example, could attract meaningful foreign flows to the local equity market, notes Paiva. Before its downgrade in 2009, due to foreign-exchange rate restrictions, Argentina enjoyed an average 3.2% weighting in the MSCI Latin American Index and an 0.7% weighting in the MSCI emerging-market index. Should Argentina regain its emerging market status, perhaps as early as May 2018, it could see $1.7 billion in active and passive flows from foreign investors, Morgan Stanley estimates. Among the top investment, ideas are companies involved in the agriculture, energy, financial services, real estate and telecommunications sectors.

Hitting Reset on Bonds Since Argentina settled its outstanding debt issue in April 2016, the new administration has moved quickly to complete the second largest primary emerging-market bond issuance ($16.5 billion) in history. This happened just four months after the Macri administration took office. “The result is that we think Argentina can achieve a strong BB sovereign rating by 2021,” says Gordian Kemen, global head of emerging-markets fixed income. That would mark a return to investment-grade status for Argentinian bonds. Reaching that tier, while possible, will likely require a few more years of macro stability and sustained fiscal prudence, he says. Still, Argentina could begin to benefit from such expectations much earlier. “Although investment-grade status may only be achieved beyond 2020, markets should begin to price Argentina as investment grade before that time,” Kemen says. The upshot: Over the next five years, the 10-year ARS peso-denominated benchmark bond could return more than 8% annually, while 10-year U.S. dollar-denominated sovereign bonds could return more than 7.2% annually.

While Argentina is making steady progress, investors should keep their eyes on its midterm congressional elections in October 2017, when more reform-minded electors could provide a more powerful mandate to implement structural reforms. “We believe the journey has only begun and it is not too late to buy Argentina,” says Sedano. “Given our expectations, Argentina still presents a very attractive investment opportunity across all asset classes.