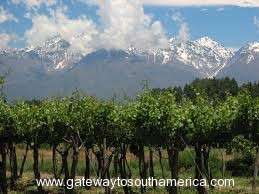 Mendoza is the Capital of Cuyo province. It is 1040 kilometres from Buenos Aires (and 340 kilometres from Santiago, Chile), and consists of around 1,100,000 people in the metropolitan area.  Lying at 747 metres above sea level at the foothills of the Andes close to the Chilean border, it is the largest city in far Western Argentina. It serves as Argentina’s gateway to Chile.

Founded in the 1560s, Mendoza was first located in the Intendancy of Chile (within the Viceroyalty of Peru) until 1776, when Mendoza and the Cuyo were transferred to the new Viceroyalty of La Plata.  In 1861, the city was almost totally destroyed by an earthquake but has since rebuilt itself; in 1884, a railroad was built to link to Buenos Aires for the first time.  The 1970s saw some nationalist fighting, but not to the same extent as Cordoba.  In 1980, Mendoza hosted Expo ’80, to commemorate the centennial of the Argentine Confederation.

Spanish-speaking, majority and also of more recent immigrants from Spain (mixed in with recent immigration from elsewhere in Latin America, particularly Chile).  In fact, Mendoza is Chileans’ favourite destination in Argentina, many having fled the political and economic chaos of the past.  The rest are either  (English-speakers), at over 15%, or those whose mother tongue is neither Spanish nor English.  The predominant religion there is Roman Catholicism, though there are small numbers of Protestants, Orthodox Christians, Jews, and Muslims.  The people in Mendoza are called Mendozans in English and Mendocinos in Spanish.

The city is the leading transportation centre of Western Argentina.  It is served by Plumerillos International Airport, a bus station, and two train stations.  Public transit within Mendoza includes a city bus network and a trolleybus system, plus a couple of tramway lines that opened in 1997 (one of which is the Wine Train, mainly for tourists heading to the nearby wine country).

Mendoza is a very beautiful city surrounded by irrigated, internationally-renowned vineyards; it has lots of irrigation canals and trees.  A spiritually interesting attraction in the city is the San Francisco Church, Convent, Basilica, and its Ruins.  Various museums include the Foundational Museum (a history of the universe focused on Mendoza), the Popular Sidewalk Museum, the Historical Museum, the Museum of the Cuyan Past, the Emiliano Guiñazú Fine Arts Museum, and the Mendoza Museum of Modern Arts.

Martin Drayston Park is an especially nice part of the city; it houses the Cerro de la Gloria, the Juan Cornelio Moyano Anthropological and Natural Sciences Museum, the General O’Brien Museum, the Mendoza Zoo, and the Archeological Museum (of the University of Mendoza).  The main celebrations are the Wine Harvest Festival (late February-early March), the Bike Tour of Mendoza (February), and the Snow Festival (July and August)

By far the favourite sport in Mendoza is soccer, represented there by Godoy Cruz de Mendoza; playing in Godoy Cruz, near Mendoza) on top.  Rugby is also played – by the Mendoza Rugby Club.

Although Mendoza has a stock exchange of its own, it is no match for Buenos Aires or even Montevideo.  Among the most important industries in the Mendoza, area are the oil industry, winemaking and olive-pressing, owing to the number of vineyards and olive plantations there.

“Mendoza’s three main theatres are the Quintanilla Theatre, the Aconcagua Theatre, and the Mendoza Theatre (the last of which hosts performances by the Universidad Nacional del Cuyo).  Classical-music lovers will enjoy the Mendoza Philharmonic Orchestra.  There is plenty of shopping at places like the Palmares and Mendoza Plaza Shopping Centres and the McClure Mall, plus at Plaza de los Artes and the Artisans’ Market, along O’Brien Street (the main shopping street downtown).

In Mendoza, there are four main hospitals, plus many minor ones.  The Hospital Central and the Servicio Coordinado de Emergencia serve the Spanish-speaking population. At the same time, Henry C. Churling Memorial Hospital caters to an English-speaking clientele, and the Cuyo General Hospital is bilingual.

The main newspapers in Mendoza are the Los Andes and the Tribune-Post.