Cartoon islands are usually a rock amidst water with a palm tree on top. In real life, however, islands are much more. Lobos Island (Isla de Lobos) in Rio Negro Department of Uruguay, was the breeding land for the first cattle to be introduced to Uruguay, the origin of what is today the number one gross national product. It still is an important source of quality beef and now it can be yours. 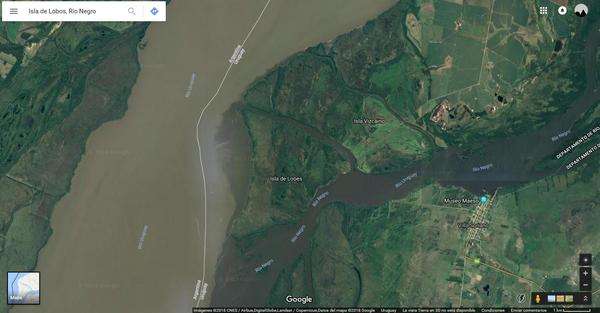 Situated at the confluence of Uruguay and Negro Rivers, the aerial view clearly shows the meeting of the waters. The warm silt-laden Uruguay waters flow from Brazil reddish in colour while the Negro ones are considerably blackish. The name Negro actually derives from translation into Spanish of the indigenous name “Hum”, meaning “black” in Guaraní. The island name –Lobos- comes from the long-tailed river otters once plentiful, as well as the one given to the watercourse along one of its sides –Yaguarí River- that translates as otter in Guaraní.

Shaped roughly as a triangle, the 1250-hectare island has characteristic coasts on each side. The west coast overlooking the Uruguay River is an occasionally flooded low land with native plants and an amazing biodiversity, kept as a reserve. Since the Argentine coast is lower and the river is quite wide, the view across the water is open to spectacular sunsets and the occasional Pampero cigar cloud announcing the west wind from the Pampas. The northeast coast over the Yaguarí is a narrow yet deep channel normally flowing inland: the navigable entrance to Negro River. Here the coast is higher and fertile, with both native and introduced trees and a close view of nearby Vizcaino Island. Finally, the Southeast coast on the Negro River false mouth and delta is a long white sand beach bordered with native trees and bathed in calm shallower waters laden with fish. 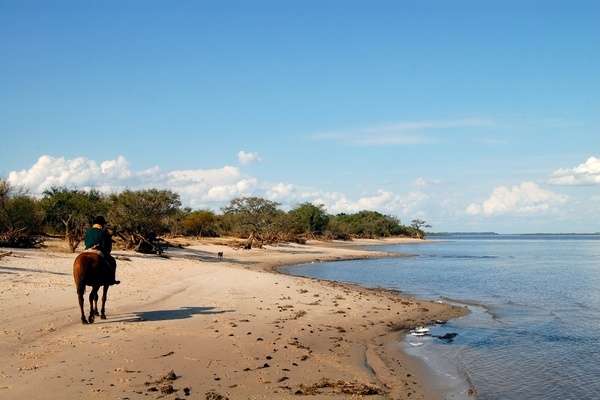 The ceibo trees on the Boca Falsa beach explode in red flowers each spring.       Photo: MVI

Inland, the island has three distinct ecosystems: the low lands, the native forest and the prairie, each with its characteristic flora and fauna, making it particularly well suited for cattle breeding and beekeeping for organic honey.

Man inhabited this corner of the Eastern Bank (Banda Oriental) since its appearance in this South America region. Ceramic utensils found in the Uruguay-Negro confluence were dated as early as 3000 years before present times when sea level was about 6 meters higher. A second wave 2000 years B.P. speaks of river economy societies identified with the Chaná ethnic, while later findings mark the combined presence of Tupí-Guaraní groups in contact with Spanish and Portuguese expeditions.

Introduction and propagation of cattle in the Eastern Bank

Spaniard Juan Rodriguez Serrano first sighted Lobos Island in 1520 and entered the Negro River, but the area remained devoid of European presence until the XVII century. In 1611 Asunción del Paraguay Governor Hernando Arias de Saavedra (Hernandarias), owner of Lobos and Vizcaíno Islands by deed of the King of Spain brought 50 heifers and some bulls and left them to reproduce, the first cattle ever in this land. Soon the local Chaná-Genoa tribes were experts at handling the ever-growing number of cattle, followed by Charrúa from across the Uruguay river and attracting the attention of Catholic missionaries.

In 1624 Franciscans founded the Yaguarí reductions, the origin of Gualeguaychú town in the Right Uruguay Riverbank and Santo Domingo de Soriano village on the Left. The last one was the first town settlement in Uruguay, initially emplaced on the Yaguarí banks and in 1708 transferred to its present location on the Negro, 5 km from Lobos. A few years later Jesuit missionaries established the Yapeyú reduction upstream the Uruguay River and populated it with Tupí-Guaraní people. In 1702, this reduction was the centre of the Rio Negro Cattle Ranch (Vaquería del Río Negro) that encompassed the vast area limited by Cuareim, Uruguay and Negro Rivers, was dedicated to cattle breeding and included posts at the confluence or Chicken corner. 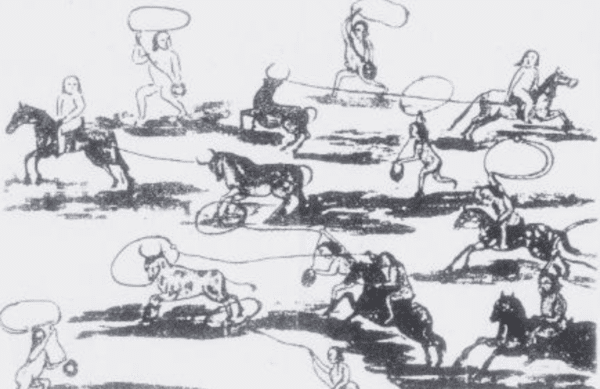 Cattle breeding in the area continued even after the Jesuits banishment in the XVIII Century and herds extended to all the Banda Oriental. Lobos Island was a strategic location in the Independence Wars and by the end of the Uruguay Great War (1839-1851); it belonged to British Samuel Lafone who used it as breeding terrain for supplies to his slaughterhouse and meat salting business in Montevideo. Lafone may even have shipped livestock from the Rio Negro river to Falkland/Malvinas Islands where he had lands and business.

The second half of the XIX Century marked the introduction of new cattle breeds to better the existing criollo and the beginning of modern meat processing industries following the invention of refrigeration. In 1863, Liebig´s Extract of Meat Company was established in nearby Fray Bentos town to make good use of the abundance of animals nearby and the easy navigation to overseas ports. From then on cattle related production never ceased to grow. Present day Uruguay exports processed meat, livestock, sperm, milk and dairy products capable of feeding many times its population. 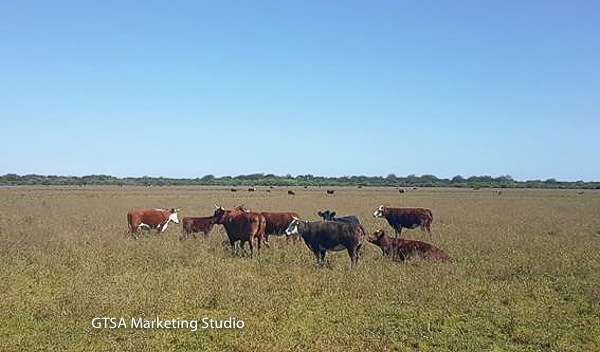 As for where it all began, Lobos Island’s present owners continue with the cattle breeding tradition. Handling facilities have been built and artificial tree refuges planted but animals are raised in the open and supervised on horseback. Water is never scarce even in the worst droughts and the high land parts ensure safety in case of flooding (which nowadays can be foreseen as Both Uruguay and Negro Rivers have hydroelectric dams upstream) and a continuous supply of good pastures.

River tourism on the Negro River

The second export category in the country –tourism- is also growing in the region and the island is well endowed for it. Negro River waters were always famed for its purity and alleged curative properties and were even exported in colonial times.  In 1802, King Carlos IV of Spain actually declared Santo Domingo de Soriano a heath port.

Nowadays the Tourism Ministry is building on its popularity as a sports, sailing and motor boating destination and has included Villa Soriano and Mercedes in the Painted Birds Corridor (Corredor de los Pájaros Pintados) program, adding nautical infrastructure and international promotion. Pleasure vessels of all size and types go by Lobes Island to enjoy bathing, fishing, or just anchoring on the channel before continuing upstream or downstream to other ports along Uruguay river or even Paraná River since its Delta is a few miles downstream. 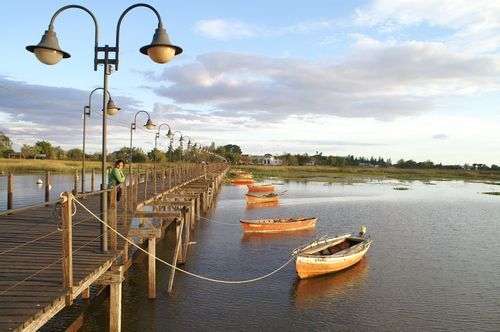 Other visitors come by land after a 4-hour ride from either Buenos Aires or Montevideo to enjoy fishing for dorado, sábalo and surubí, canoeing or boar or deer hunting in the native river forests. More sedate pursuits include nature walks in the lowlands, the river gallery forests or the beaches and bird watching. Ibis, chajá, black-necked swans, ducks, blue herons, cardinals, parrots, pampa eagles and many others abound in their different habitats.  Uruguay means River of the Painted Birds, for good reason!

As a bonus, at the end of any day, everything is enveloped in a dark star-studded sky only broken by Buenos Aire’s lights far away and a thick silence punctuated by flowing water sounds. May this productive paradise be preserved and enhanced.

*  Believe it or not there also a very small island called Isla de Lobos on the eastern side of Uruguay off Maldonado. This plus the fact that Google has incorrectly labelled the one on the Rio Negro as “Isla de Lobes” rather than its correct name “Isla de Lobos” can be confusing for non-locals.