Gateway to South America on 13/02/2012 - 10:59 in All categories of countries are, Argentina Lifestyle, Argentina Mendoza, Argentina-General, Argentine farms 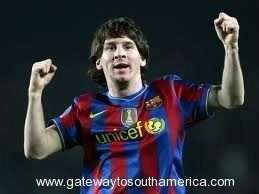 Football superstar Lionel Messi is to become the latest sportsman to enter the wine industry after Argentinian winery Bodega Valentin Bianchi announced it is to launch a new wine bearing his name.

The wine will be called “Leo” after the Barcelona and Argentina star and it has the full backing of the three-time FIFA World Player of the Year.

According to the winery – which is based in Messi’s home province of Mendoza – the project will be carried out in cooperation with the Leo Messi Foundation, with the profits being diverted to charitable causes.

“This venture will collaborate with the Leo Messi Foundation in order to continue creating projects focused on infant health and education, as well as establishing sporting activity as a key part of the fight against poverty and vulnerability,” a statement said.

“These are the fundamental aspects of the Foundation, which since 2008 has worked tirelessly to carry its mission forward; acting to help at-risk children and adolescents.”

This new partnership is far from the first charitable project that Messi has aided through his foundation.

He has helped to fund new sporting facilities in Rosario, as well as set up a scheme which offers scholarships in Barcelona to Argentine students studying pediatric medicine.

At just 24 years of age, Messi has won three consecutive FIFA Ballon d’Or (“World Player of the Year”) awards and is considered by many to be the best soccer player on the planet, if not one of the best of all time.

There seems to be something of a growing trend in sportsmen getting involved in the wine industry. Last year we reported that Chinese basketball star Yao Ming is venturing into business just months after retiring from the NBA, setting up a wine company to meet a growing thirst for wine in his home country.

In 2008 former France, Newcastle and Spurs winger David Ginola received a silver medal at the International Wine Challenge for a rosé wine produced at his vineyard in Provence.