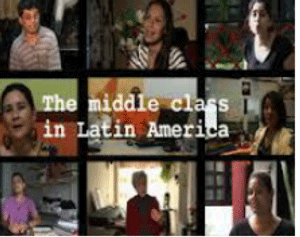 This article was written by Christopher Lenton and was published on October 6, 2014 in BNamericas)

In a recent report, Moody’s warned that the middle class in Latin America is “moderating.” “Economic growth throughout Latin America is slowing down, with growth in the first half of 2014 lower than we expected, negatively affecting both consumption and investment,” said Gersan Zurita, a Moody’s senior vice president.

The ratings agency added that certain companies in the region, especially those dependent on middle class spending, such as retailers, auto manufacturers, homebuilders and airlines, have cause for concern.

Expect investment and government spending rather than consumption to boost economies, Moody’s said, while highlighting the fact that each country has its own story; its economic forecast for Mexico, Colombia and Peru is a “bit more optimistic.”

The report singles out Argentina, where “economic and social decline threatens to undo much of the progress of the earlier decades.” A larger view, however, might suggest that there is no reason to panic. The middle class has come a long way in Latin America.

In the case of Argentina, for example, it’s important to mention that 54% of the country is considered middle class by the World Bank, second only to Uruguay’s 60% in the region.

Moreover, general elections are slated for next October in Argentina, meaning the end of the Cristina Fernández administration – reason enough for economic and social optimism.

A new BNamericas Intelligence Series report shows advances in the region are considerable.

A few findings are:

– The middle class accounts for about 34% of all Latin Americans, up by more than 12 percentage points since 2000.

– The region’s poor, defined as those earning less than US$4/day, has declined by about 16 percentage points between 2000 and 2012.

– The middle class in Peru, Argentina and Bolivia expanded by 19, 18 and 16 percentage points, respectively, over this period. Meanwhile, Bolivia’s poor shrunk by 32 points, followed by Peru (26 points) and Venezuela (23 points) in the same comparison.

– Latin America’s middle class is expected to continue expanding, reaching 42% of the total population by 2030, using the World Bank’s US$14,600-73,000/year definition of the middle class for a family of four.

The Intelligence Series report, however, notes that “despite its impressive gains, Latin America is not yet a middle class society. For the first time, most of its inhabitants are not living in poverty, but just over half of its middle sectors fully enjoy the economic security typically associated with the middle class.”

It is for this reason that the main platforms of winning politicians in recent years have included large social spending to fight inequality and increase access to decent education and healthcare. So, the region has much to accomplish, but the middle class is here to stay.

This was seen and celebrated during the recently held World Cup, when fans from across Latin America flocked to expensive Brazil, flooding its cities and hotels and restaurants and shops. According to the New York Times, some 208,000 match tickets were purchased in Latin America outside Brazil, surpassing tickets bought in the United States and Germany, the biggest source of ticket purchasers in Europe.

During Latin America’s lost decade of the 1980s, or even during the relative calm of the 1990s, a scene like this would have been very difficult to imagine.