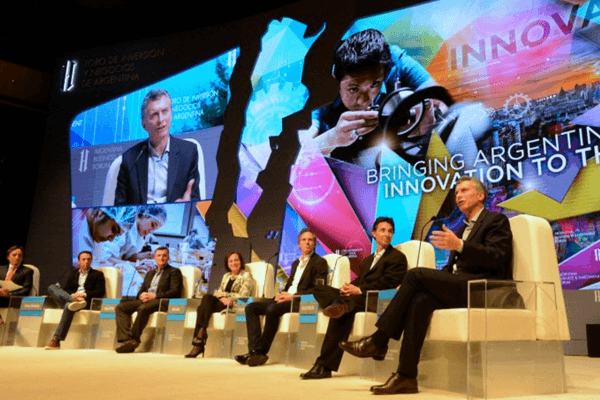 Since colonial times Latin America’s role in the world economy has been as a supplier of commodities. It was a late adopter of technology, receiving it second hand, first from Europe then from the US. But now the region is starting to develop its own world-class tech firms. It’s rare that high-tech Latin American companies break out from their home markets to compete on the global or regional stage, but the launch of $5 billion SoftBank-backed tech fund poised to invest in tech in Mexico and Argentina could change that.

Masayoshi Son, chairman and CEO of SoftBank, said: “Latin America is on the cusp of becoming one of the most important economic regions in the world, and we anticipate significant growth in the decades ahead.” The investment may be Japanese but a Latin American, Bolivian-born Marcelo Claure, will run the fund.

The fund dwarfs the $1.5 billion of venture capital cash that went to the region in 2018, according to LAVCA, the Latin America Venture Capital Association, and puts the region on a rapid fundraising path. LAVCA estimates that annual venture capital funding to Latin America more than doubled from 2016 to 2017, to $1.4 billion from $500million. Capital is essential for tech groups to grow, but funding isn’t everything. For a tech sector to blossom, you need business-friendly environments, mass tech adoption and brilliant ideas. Latin America ticks these boxes.

Latin America has many of the characteristics that start-ups need to thrive, and there is no shortage of problems for tech to solve.

With 80% of its population living in cities or towns Latin America is one of the world’s most urbanised regions. This is supported by excellent demographics. There are 163 million aged between 15 and 29, according to the OECD, making up a quarter of the Latin American population. There are 415 million mobile phone users, with 63% of Latin Americans expected to have mobile internet access by 2020. And Latin Americans are addicted to social media – Brazil and Mexico have the 3rd and 5th most Facebook users in the world.

And there a plenty of targets for disruption. Tech companies should be able to step into to solve many of the day-to-day challenges of life in Latin America, from security in gated communities, to beating gridlocked highways, or cleaning up the streets.

So what could stand in the way? Universities can be good, but they are nowhere near world class, which stands in the way of home-grown technological breakthroughs. The region’s top-ranked university is the Pontificia Universidad Catolica de Chile, based in Santiago, followed by Brazil’s University of Sao Paulo and the University of Campinas, while the best engineering university is the Monterrey Tech, in Mexico.

Chile and Brazil to lead the way

Brazil, owing to its size, has sucked up most of the VC interest in Latin America, capturing $1.4 billion (73%) of funding in 2017 and the first half of 2018, but there is promise across other parts of the region. Colombia is in second place with $188 million, followed by Mexico with $154 million. According to the LAVCA, fintech was the number one sector, with $540 million invested across 94 deals over this 18-month period, followed by market places with $304 million and 27 deals.

A simple way of assessing the potential for start-up growth is to look at the research by the Global Innovation Index, which ranked countries for their innovation potential by looking at a range of variables, from the regulatory and political environment to the standard of education and IT infrastructure. Zooming in on a knowledge and technology outputs, which is a key ingredient for start-up growth, Chile, Costa Rica and Mexico are the highest scoring countries. However, on a global scale, they perform poorly, falling in 48th, 56th and 60th respectively, while the United States and UK were placed in 6th and 13th place respectively.

Chile’s capital Santiago is the regional leader for start-ups, driven by low bureaucracy, a healthy economy, and international and government investment in start-up incubators and innovation.

The most important of these incubators is Start-Up Chile. Launched in 2010 with government funding, it has worked with more than 1,300 small businesses that now have an estimated total value of $1.3 billion. Its model has been replicated in around 50 countries. A key driver of this growth is the support that it receives from the government. It invests $15million per year, compared to the UK’s $9.9m, and has been successful that it has been earned the nickname “Chilecon Valley.”

CEO of Start-Up Chile Sebastián Díaz Mesa told LatAm Investor that said that business-to-business start-ups are thriving. He believes that globally significant start-ups can emerge from Latin America in the next ten years.

“We already have some amazing examples, such as Cornershop, an online grocery delivery service from Chile which was recently bought by Walmart for $225 million, The NotCo just received capital from Amazon to scale globally, and Cabify is the main competitor of Uber in Latin America and just reached a $1.4 billion,” he said. But there are some hurdles to overcome: “We still have cultural barriers and some limitations in the region, but that is changing really fast. Chile, Colombia, and Mexico are leading this change.”

You may not have heard of many Latin American tech firms but there has been some serious interest from the industry’s big players with some big IPO success stories already and more to come this year. Brazilian learning systems provider Arco Platform (ARCE) listed on the Nasdaq in 2018 and reached a $1 billion valuation by the end of its first day. Its market cap is now $1.4 billion. As did Stone Pagamentos (STNE), a Brazilian payments company which now has a market cap of $9 billion. Brazilian fintech company Nubank raised $150million and then $180 million from DST Global, Tencent and others in 2018.  Brazilian audiobook company Ubook is planning a Canadian IPO in the second half of 2019. Colombia’s Rappi is also a huge success story. The delivery app raised $200million in August 2018 to bring its estimate value above $1billion.

But according to LAVCA director, Julie Ruvolo, shortage of funding is still a barrier to success for Latin American start-ups. Nevertheless, she said that “it is clear that Latin American start-ups don’t need to have global or even regional ambitions to scale effectively. Fintech unicorn Nubank, now the largest digital bank ex-China in terms of the number of clients, has attracted international capital.”

A new field of investment…

While you aren’t likely to order food using Rappi in the UK anytime soon, or get your ebooks from UBook, Latin America is making an impact in venture capital circles and the successful IPOs in US have proven its tech firms can compete globally. The combination of demographics, new funding from SoftBank and effective start-up incubators, as well as an all-important drive to solve the region’s inefficiencies, makes Latin America a fertile breeding ground for tech companies. Until now British investment in the region has focused on commodities. But given the UK’s strong position in fintech, innovation and capital markets, investors should start to look for opportunities in LatAm’s fledgling tech sector.

Share12
Share
Tweet
WhatsApp
Email
12 Shares
0 POST COMMENT
NEXT ARTICLE
The Stories and Secrets of North Diagonal and Puerto Madero area of the CBD of Buenos Aires in the first half of the 20th Century
08/05/2019 - 14:22
PREVIOUS ARTICLE
Real Estate Disrupter Purplebricks model fails in Australia
07/05/2019 - 08:39