Latin America, not South-East Asia, will be the world’s economic powerhouse 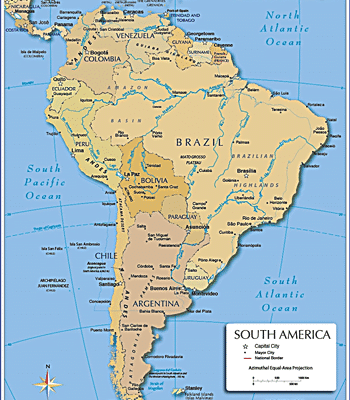 Latin America, not South-East Asia, will be the world’s economic powerhouse

(The following article was written by Rafael Salazar and was published in The Huffington Post on 3 February, 2016)

In today’s post-recession, cost-competitive environment, Asian countries like India and China have positioned themselves as the natural heirs to U.S. economic dominance. However, as Americans and Europeans look east, fretting about China’s economic outlook amidst rising debt, stagnating wages, and excess supply with weakened demand, changes are happening in South and Central America that could potentially have a game-changing impact on the economic landscape of the twenty-first century.

The upsides Economic indicators are often viewed short-term, and to see why Latin America is uniquely positioned to assume a leading role in the economics of the twenty-first century, it’s important to look at longer term indicators that are slightly subtler, but which a great punch over the long run.

While the economic paths chosen by countries must be sustainable in order to achieve any lasting economic power, development in Asia has largely placed such concerns in a subordinate position to rapid economic growth. Indian coal-fired rapid growth has resulted in pollution so pervasive that the average Indian’s lung capacity is about 30% less than that of average Europeans.

China, as well, has calculated that economic advancement is worth plundering its own resources and fouling its own air and water, at least in the short term. As a country, China is the largest emitter of greenhouse gases in the world, at over 10.5 million kilotons a year, and its safety record in both consumer products and manufacturing processes has resulted in a number of high-profile scandals including the sale of tainted meat to fast foods whose best-by date had passed some decades previously.

Though China has recently passed a number of product safety laws, including a stringent food safety law in June of 2015, their effectiveness is unproven as yet.

Given the rising labour costs, shipping expenses, and safety issues, companies like G.E., Buck Knives, and Otis Elevator, among others, have brought their manufacturing back to the western hemisphere, further accelerating China’s budding economic crisis.

After a few false starts – for instance, Argentina’s great and complicated economic crash that hit bottom in 2001 – most Latin American countries focused on slower growth in industries such as agriculture, tourism, mining, and forestry. Mexico was able to capitalize on NAFTA to increase its manufacturing sector by attracting companies like Caterpillar and Black & Decker, and Colombia and Uruguay are nurturing nascent tech industries. In Central America, Costa Rica and Nicaragua are fostering “ecotourism” as an industry, and in Nicaragua, “fincas,” which combine cooperative agriculture with tourist resorts, are drawing investors.

Another measure of long-term economic health is the ability of a nation to feed its people, and still be left with enough products for exports. A great advantage that South America has over Asia is that there are more South American countries than Asian countries with a biocapacity surplus – that is, they have more productive land and water than is needed by their population. With the exception of Mongolia and East Timor, one needs to go down the list of countries to Laos at number 43 before finding another Asian country that can produce enough to feed its own populace.

Analysts realize that much of the fighting in the world this century has been driven by the need for certain natural resources – especially water and oil. Latin America enjoys significant reserves of oil in a number of places, and the region is fortunate in having sufficient water, and thus will be able to benefit from the biocapacity surplus while other parts of the world will be in need of those very resources.

Coffee, cacao, iron ore, steel, as well as a quarter of the world’s copper are all staples of Latin American countries.

In a country that can feed its populace, poverty and even hunger does not result in starvation, allowing (1) a productive workforce; (2) the potential for a trade surplus; and (3) the freedom to focus heavily on education, as the populace is fed sufficiently, though sometimes meagrely.

It means state spending can focus on infrastructure and economic development, instead of constantly having to address starvation. The downsides Politically, Latin America has had a troubled past. Unfortunately, the relationship between Latin America and capitalism has been a strained one, and some Latin American countries hesitate to make that commitment because of a history of exploitive relationships with capitalist corporations (like United Fruit in Guatemala or Chevron in Ecuador).

This reluctance has led to some economic disasters – such as Venezuela’s big crash of 2003, caused in part by the nationalization of the oil industry and subsequent dependence on oil prices for growth. Despite this unfortunate history, Latin America will thrive best if it allows more free-market development to mix with its justifiably cautious approach to capitalism, and to rebuild investors’ trust in the integrity of its economic foundation.

Also in part because of the troubled history with the United States, Latin American countries turned to other sources of investment, particularly China, which is now suffering its own recession and causing repercussions to Latin America’s overall economic health. The Latin American economy had come to be closely aligned with the Chinese commodities market, so when China began to crash, Latin American growth slowed as well. 2015 was a year of recession for Latin America, and economists are divided as to whether that recession will continue in 2016.

There is recognition that not all Latin American countries will fare the same, as approaches to political and economic allegiances vary from country to country, but dangers that may arise or continue to exist in 2016 and the years following include lower tax revenue, loss of capital and investors, unstable currencies, high levels of inflation, and a weakened export market.

A Promising Future So with all this bad news, why might one be optimistic about Latin America’s economic future? For one thing, the issues discussed above, though painful, are manageable – and are largely the result of political and economic management choices, rather than inherent gaps in the socio-political and economic structures of these countries.

Another advantage for Latin America is that, despite a tense history, the Latin culture is still more compatible with U.S. customs than are Asian vendors and suppliers. A greater level of similarity and understanding exists between the U.S. and Latin America, which are all countries that retain a strong European heritage. The world is suffering economically right now, and Latin America, naturally, has its share of woes and worries, and an extra serving of growing pains. But the region is rich in natural resources, and is emerging cautiously onto the economic stage. The road will be long and winding, but as other countries find themselves pressed for resources, this is the region that will be in a position to provide them.

Peru’s economy grows 6.39% in December Peru’s gross domestic product expanded 6.39% in December from a year earlier, the strongest rate of growth in two years, the government said on February 15. National statistics agency INEI said Peru’s economy grew a higher-than-expected 3.26% in all of 2015. Economists had expected growth of just under 3% for last year. In December, economic activity was boosted by higher mining output thanks to the start of production at new copper mines. The INEI said the mining and hydrocarbon sector increased 22.36%, its strongest rate of growth in over 13 years, while copper production rose 68% in December compared to the year-earlier month. Peru is one of the world’s top producers of copper, which is the country’s biggest export earner. In full-year 2015, the mining and hydrocarbons sector expanded 9.27%, its strongest growth since 2005, the INEI said. The fishing sector grew 82.54% in December on an increase in anchovy catches. In 2015, the sector expanded 15.87%. Peru’s economy is expected to grow by about 4% this year.