Emilio Botín, the powerful chairman of the Santander group who died on Tuesday, had strong ties with Latin America that went well-beyond the financial elite.

He rubbed shoulders with Spanish royalty and regularly received political leaders and heads-of-state at his office in Madrid.

Botín was able to take advantage of cultural and language ties to rapidly expand his group into Latin America, where he initially purchased the Serfín group in Mexico and Banespa in Brazil, as well as buying up smaller lenders in Argentina, Chile and Venezuela.

The expansion eventually helped to shield Santander from the euro zone debt crisis and Spain’s long-running recession, with the bank now making only about 14 percent of its profit at home.

As a whole, the Latin American market represents 51 percent of the group’s profits, with the bank’s branches and ATMs a part of the urban landscape in many Latin American cities, including Buenos Aires, Mexico City and Sao Paulo.

A giant in Brazil

In Brazil, Santander is the third biggest private bank and the first foreign bank. It has close to 30 million customers and, during 2013, managed to significantly increase its share of the credit market, with mortgages up 32 percent and loans to major companies up 17 percent. Last year, it made more than 1.5 billion euros in profits.

Santander recently made headlines in the country after an analyst wrote in a note to customers that markets would react negatively and that the real would fall if President Dilma Rousseff is re-elected in October.

Rousseff responded angrily and forced Santander to take the comment back, which eventually led to Botín himself issuing a public apology.

The row, however, didn’t affect the banker’s relationship with former president and Rousseff’s mentor, Luiz Inácio Lula da Silva, who referred to the banker as a “friend” in the message he sent to his family yesterday. In the letter, Lula praised Botín for having confidence in Brazil in the middle of the 2002 financial crisis, when other foreign investors were fleeing the country.

Santander opened its first branch in Argentina in 1963 but the group only achieved significant presence in the country during the 90s, when it purchased Banco Río.

Today, the Santander Río subsidiary is the second biggest bank in the country by net sales and holds the third position when it comes to deposits — behind public Banco Nación and Banco Provincia de Buenos Aires.

After the 2001 financial crisis the group threatened to leave. Eduardo Duhalde — who had taken over the presidency after the resignation of Fernando de la Rúa — travelled to Madrid to meet with Botín in 2002, and the banker recommended following the IMF’s advice.

Eventually, the group decided to stay in the country, which proved to be a good decision considering the profits it has managed to make during the last decade.

But Brazil and Argentina are hardly the only Latin American countries that are key to the group’s interests.

In Mexico, Santander is the fourth biggest group in net sales and has become the leader in the small and medium companies’ credit market. It has 1.2 million clients and managed to make 713 million euros in profits last year.

Chile is also a key market for the bank, which also has presence in Uruguay and Puerto Rico.

Santander’s presence in Venezuela, meanwhile, was cut short in 2009, when Botín sold the Banco de Venezuela to former president Hugo Chávez for more than US$1 billion.

The operation showcased the banker’s shrewdness when it came to business dealings: after Chávez threatened to nationalize the flagship bank, Botín arranged a secret meeting in Madrid with Venezuelan banker Víctor Vargas and offered to sell the bank. When Chávez found out about the meeting, he outbid Vargas’ offer and Botín ended up selling the bank for its market value. 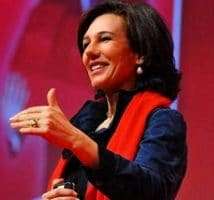 Santander also had presence in Colombia but sold its assets in 2011.

Ana Patricia Botin ,the daughter of  Emilio  has been schooled for decades to replace her father Emilio Botin at the helm of Santander, ensuring that Spain’s banking dynasty will remain in charge of the euro zone’s biggest bank.
Santander’s board of directors unanimously appointed Ana Botin as chairwoman today, a day after her father died of a heart attack at 79, making her the fourth generation of Botins to run the bank.
Botin, who is 54, is an experienced financier in her own right. She has led the British arm of Santander since 2010 and was chairman of Santander’s Spanish-based subsidiary Banesto from 2002 to 2010.
She has been on the board of Santander itself since 1989.
Educated in Spain, Switzerland, Britain and the United States, Harvard Business School graduate Ana Botin has a polished international profile and is the only one of Botin’s six children to have a major role in the banking business.

Share
Share
Tweet
WhatsApp
Email
0 POST COMMENT
NEXT ARTICLE
How many hours do South American workers need to work to pay their taxes
14/09/2014 - 10:44
PREVIOUS ARTICLE
For decades Switzerland has had bank secrecy. Now it does not. Ouch for the rich and corrupt politicians
09/09/2014 - 17:05