Gateway to South America on 11/02/2014 - 08:10 in All categories of countries are, Argentina-General, Brasil-general en, Chile – General, General of Uruguay, Perú-general en 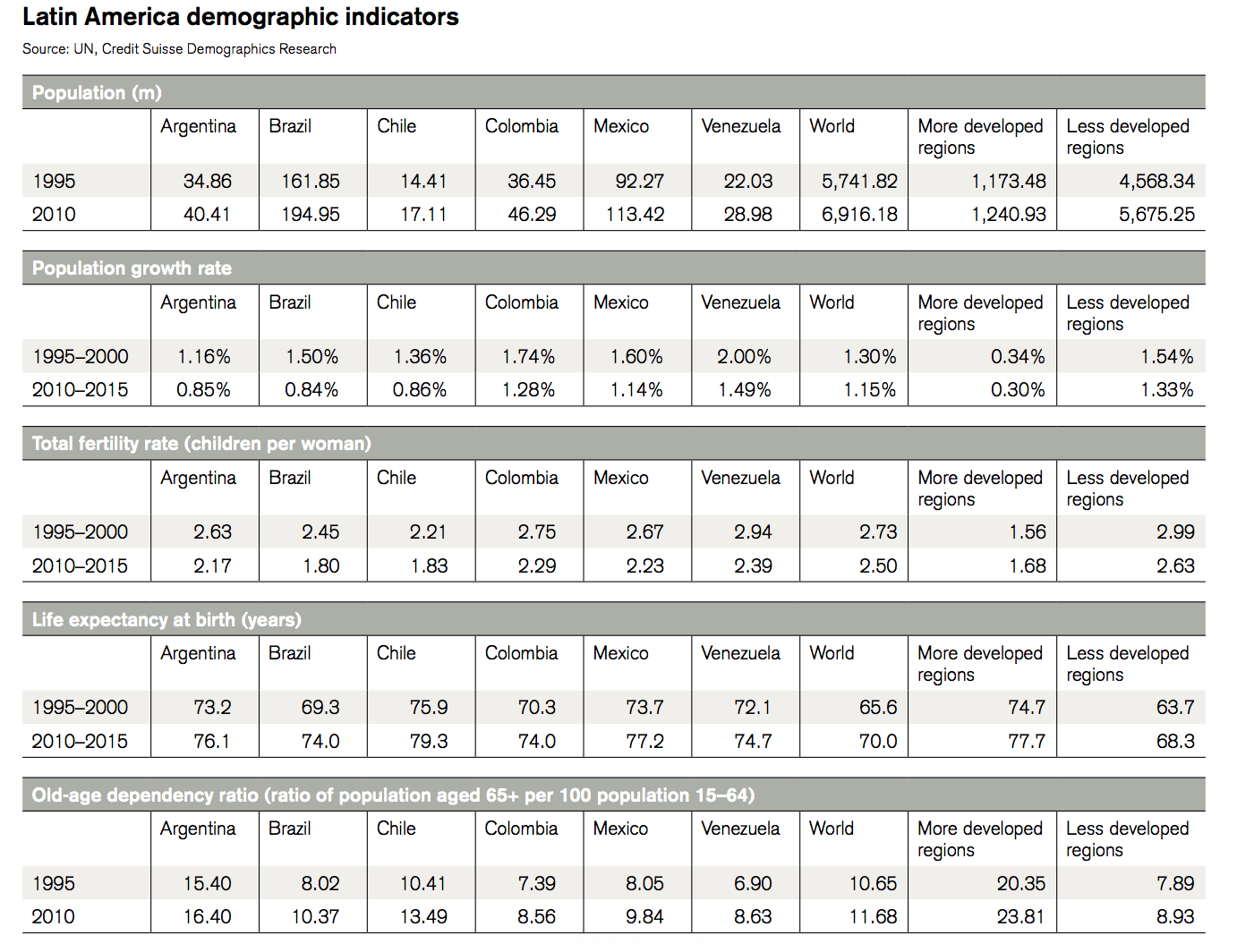 Latin America will continue to benefit from favorable demographics compared to much of the world. The growth rate of the adult population is slowing, but it will be higher than the global rate expected for 2020 and life expectancy is now nearly 75, against 76 in Europe, 79 in the US and 70 globally.

The region’s education standards are improving. Mean years of schooling for adults in the region is now 7.8 years, against 7.4 years globally. Expected years of schooling for children is 13.8 years in Latin America and 11.5 globally. As a result, the prospects for human capital are fairly positive, especially given the region’s relatively young population and low unemployment rate. It is still well below the investment that countries like Korea or Taiwan made in education, but the trend is positive. Brazil and Mexico are the countries where more investment is needed in this area.

Despite the significant progress made over the last 20 years in many key areas, several challenges remain. Latin America has grown at an annual pace of 3.1% since 1990, but productivity growth has disappointed.

When measured against other regions in the two decades after 1990, the Conference Board finds that average total factor productivity in Latin America has been almost stagnant, compared to very high growth in emerging Asia. This is also reflected in the region’s poor scores in technological innovation. The ratio of patents filed per million inhabitants was 7.1 in 2010, against 155 in emerging East Asia and 638 in the OECD.

Research and development expenditure was only 0.8% of GDP in 2009, against 1.5%in emerging Asia and 2.5% in the OECD. There is some evidence that the region is moving into higher value added sectors. It is indicative that the dollar value of high technology exports has increased at a rate of 12% p.a. since 1994, although it is still at low levels (10% of manufacturing exports against 27% in Emerging East Asia and OECD (high income) 16.8% in the OECD).

Savings and investment ratios are below other emerging markets, translating into lower growth of the capital stock. The relatively high share of consumption and low share of investment to GDP is in strong contrast to higher growth Asian economies. Investment-to-GDP ratios close to 30% rather than the current 20% would be needed to ensure above-average long term growth. This explains in part why total factor productivity growth has been so low (wage increases are the other reason), and suggests that if investment and innovation continue to be low, there is little scope for the region to close the gap and grow at a faster pace. Government policy should therefore directly target these areas.

The legal frameworks need to improve too. Currently, the region is approximately in the middle of the World Bank’s “ease of doing business” scorecard.

There is evidence that significant progress has been made over the last decade. For example the time required to start a business has fallen to 35 days in 2013, from nearly 74 days in 2003. As a comparison, the equivalent figure is11 days in the OECD and 40 days in emerging Asia. There is a lot of scope in areas such as justice, where the time required to enforce a contract has risen from 710 days in 2003 to 726 days in 2013, against 517 days in the OECD. In order to close the productivity gap with advanced economies, this is another area on which the public sector needs to focus

Part of a Report done by Credit Suisse Private Banking