Gateway to South America on 29/05/2018 - 16:54 in All categories of countries are, Argentina Lifestyle, Argentina-General, Brasil-general en, Chile – General, General of Uruguay, Perú-general en 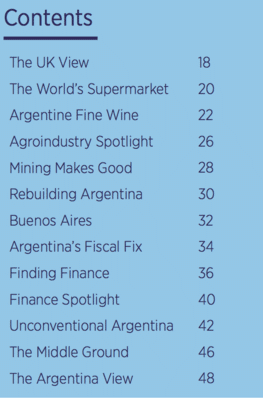 When Mauricio Macri came to power in late 2015 and promised to fix Argentina’s distorted economy it caught the world’s attention.

In the LatAm INVESTOR Argentina Report published in Q2 2016, we described how closed sectors were being opened up for international investors.

Two years later we’re back with an update. Macri’s first 100 days were a whirlwind of rapid changes, as he tackled the most perverse distortions in the Argentine economy.

However, since then he has followed a policy of gradualismo that has looked to slowly fix Argentina’s economy, rather than implement a Chicago-school shock. It has yielded political results, with Macri’s government improving its position in the mid-terms, and returned  Argentina to economic growth.

However, gradualismo also meant that Argentina’s large fiscal and current account deficit continued, leaving the country at the mercy of international investors. At first that worked well, with the market happy to lend Argentina money. But as the US interest rate environment has tightened, capital has started to leave Argentina.

A run on the peso forced the Central Bank to increase interest rates to 40%, while the government has increased deficit cuts and requested IMF help. For some weary observers, the peso’s problems were a sign that Argentina is always just one step from a crisis. For others, it’s all part of the recovery. Daniel Marx, an ex-Argentine Finance Minister, who was interviewed before the recent currency fall, noted, “people underestimate the complexity of the balancing act that Argentina is carrying out.

There will be swings in sentiment and twists in the road because it’s a tricky situation.” Those remarks now look pretty prescient. Long road ahead It remains to see how the peso’s moves will spill out into the rest of the economy but many of the specific sectors that we look at in the report will be unaffected. The overall feeling from those interviewed is that any international investment in Argentina is going to be long-term and will face bumps on the way.

In most sectors, the bullish rational is that industries were starved of investment for so long there is a pent-up demand and potential that can now finally be realised by international and local capital. The investors have started arriving, albeit more slowly than hoped. Marcelo Slonimsky, a partner at Bourel & Paris Laplace, one of Argentina’s leading boutique corporate law firms, says deal flow is still limited but he is optimistic about the future. “The good news is that now, Argentina is on the radar of international investors and there is huge appetite to look at opportunities here.

President Macri’s government has had a very promising start and there are many sectors, in particular, energy and infrastructure that require massive investment. Investors need to see sound and responsible economic policies with strong fundamentals, and with that, they will have the necessary confidence in the country to make investment decisions, either to set up or buy a company, hire staff and bring technology.

As part of the macro normalisation, the government is trying to push for tax and labour reforms because the cost of doing business in Argentina is still very high and many things must still be done to have a business-friendly environment

It remains to be seen, and this is the big challenge, whether Argentina can implement and maintain all these policies in the long-term irrespective of who is in government.” Indeed, that is the real question for investors: not how much the peso is worth today or the nominal interest rate, but whether you believe that the new investor-friendly approach will be maintained by future governments. Over the following 30 pages you will hear from investors that have already committed their money to Argentina, and the ministers that are trying to reshape it, on where the best opportunities lie.