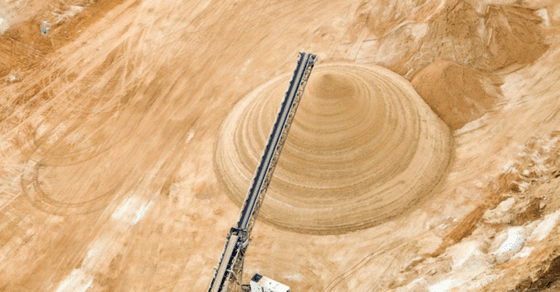 Sand shoveled out of an Argentina river used to transport soybeans will soon reappear 1,100 kilometers (700 miles) away in the country’s booming shale fields.

For Jan de Nul, which has been dredging the river since 1995 to make room for soy cargoes, the shale industry is emerging as a lucrative side business. River sand in Entre Rios province is just right for hydraulic fracking, where a mix of water, sand and chemicals is pumped at huge pressure to crack rock deep underground. That’s because it’s mostly made of highly-resistant quartz.

Jan de Nul is working with other sand companies operating on the river that typically supply the construction industry. It expects approval this week to dredge the banks to feed a plant in Entre Rios, where it dries and sieves the sand. Jan de Nul’s not allowed to sell the silt it churns out of the river channel. Argentina is the biggest shipper of soy meal and oil.

The agreement between the dredger and Tecpetrol runs for a year from January and covers as much as 70,000 metric tons.

Drillers need about 6,000 tons of sand for each shale well. At about $180 a ton, including $70 of trucking fees, the contract is worth $12.6 million. For Tecpetrol, that’s a good deal, especially since sand — known in the industry as a proppant — is a major cost for shale drillers.

Companies in Vaca Muerta, where Argentina is trying to replicate the success of the Permian Basin in the U.S., pay closer to $200 a ton for domestically-sourced sand. Sand shipped from the U.S. costs as much as $300.

Tecpetrol is one of Argentina’s biggest shale gas drillers, producing 17.5 million cubic meters a day at its flagship project Fortin de Piedra, though a fight with the government over subsidies may curb output.

Jan de Nul is making inroads into a market where big players include Cristamine, a supplier to the glass industry that’s pounced on the rise of shale over the past five years. It has a quarry in Entre Rios. There’s also Grupo Arenas Patagonicas, which operates in Chubut province. State-run YPF SA, which has drilled the vast majority of the roughly 1,000 wells in Vaca Muerta, trucks in the sand from those quarries and processes it on-site.