Is the the USD doomed as a world reserve currency?

Gateway to South America on 20/10/2018 - 13:03 in All categories of countries are, Argentina-General, Brasil-general en, Chile – General, General of Uruguay, Perú-general en

The United States has benefited enormously from being the Worlds Reserve Currency because much of the world still uses the dollar for international trade.  This is because foreign governments must hold in their foreign exchange reserves USD’s to settle international claims and intervene in foreign exchange markets.

U.S. dollar-denominated assets comprised 63.79 percent of disclosed foreign exchange reserves. The Bank for International Settlements (BIS) reported that 88 percent of all foreign exchange transactions in 2016 involve the U.S. dollar on one side. In 2014, 51.9 percent of international trade by value and 49.4 percent of international trade by volume of transactions were invoiced in U.S. dollars. Major internationally traded commodities such as oil are still priced in U.S. dollars. The status of the U.S. dollar as the world’s reserve currency and the resulting foreign demand for U.S. dollars creates what French Finance Minister Valéry Giscard d’Estaing described in 1965 as an “exorbitant privilege” for the United States. …While difficult to measure, empirical studies suggest the privilege is worth about ½ percent of U.S. GDP (or roughly $100 billion) in a normal year.

However, nations are beginning to reject the dollar because they no longer want to acquiesce to the extraterritorial imposition of U.S. laws that have no relevance to their own countries or trading relationships. They are irritated by FATCA and other aspects of extraterritorial taxation the US attempts to impose on them. The pointless imposition of “know your customer” rules and other anti-money laundering policies that impose heavy costs without having any impact on actual criminal behaviour are becoming a burden to normal commerce.

Of course, when you dig a bit deeper into where and who is involved behind the money laundering laws you see the countries and the companies that are involved are somewhat opaque. The policing of money laundering is used as an instrument of power often by those who actually are involved. ie the UK’s British territories and the US’s  Nevada, Delaware, Montana, South Dakota, Wyoming and New York. In other words, it suits them to have one rule for themselves and another for those they wish to control. One can only assume that both these countries allow this double standard so as to bolster their own currency reserves.

America’s dollar makes up two-thirds of international debt and a like share of global reserve holdings. Oil and gold are still priced in Dollars, not Euros or Yen. Threats to be cut off from the dollar-based global payments system strike terror into the likes of Europe, Iran, China, North Korea, and Russia etc.

Political leaders who once accepted the dollar’s hegemony, grudgingly or otherwise, are now pushing back. In March, China challenged the dollar’s dominance in the global energy markets with a yuan-denominated crude oil futures contract.  French Finance Minister Bruno Le Maire told reporters in August that he wants financing instruments that are “totally independent” of the U.S. 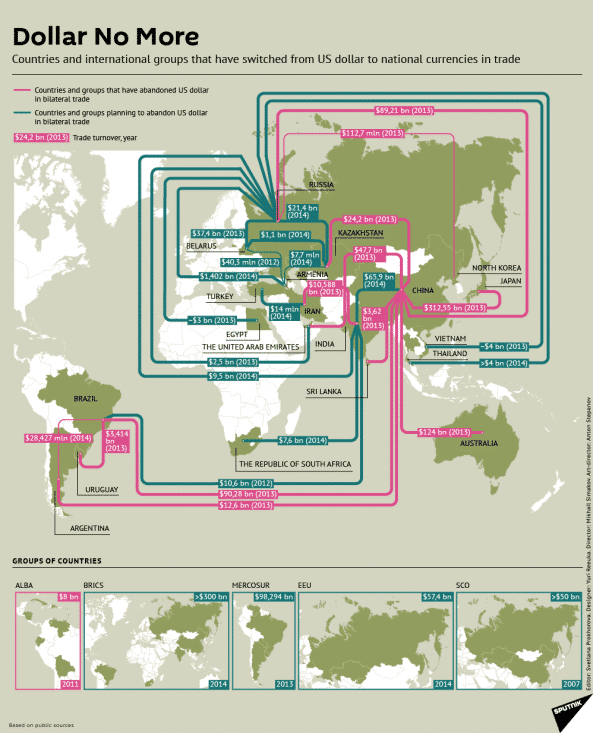 The most immediate risk to the dollar is that the U.S. will overplay its hand on financial sanctions, particularly those against Iran and countries that do business with Iran.  European leaders, in response to what they perceive as an infringement on their sovereignty, are openly working on a payments system that would enable their companies to do business with Iran without getting snagged by the U.S. Treasury Department and its powerful Office of Foreign Assets Control.  Dissatisfaction with the dollar’s dominance is mounting.

Those using the USD for international trade must utilise an international payment system known as SWIFT (the Society for Worldwide Interbank Financial Telecommunication) for transactions.

SWIFT and the US dollar dominance gives them a great deal of leverage over other countries. China, Russia, and Iran have taken steps to limit their dependence on the dollar and have even been working to establish an alternative payment system to SWIFT. A growing number of central banks have been buying gold as a way to diversify their holdings away from the greenback. Even traditional U.S. allies have grown weary of American economic bullying. On Sept. 24, the E.U. announced its plans to create a special payment channel to circumvent U.S. economic sanctions.

Trump has now weaponised the U.S. dollar, using its economic dominance as both a carrot and a stick. So-called economic enemies” can find themselves locked out of the global financial system, which the U.S. effectively controls using the dollar. This situation will not last as countries will make other arrangements. ie Bartering of commodities etc whilst other systems like Blockchain etc is introduced.

De-dollarization of the world economy would likely perpetuate a currency crisis in the United States, but it appears a movement to dethrone the dollar is gaining steam.