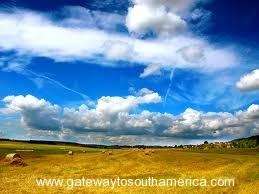 When Simon Veldt’s father and his fellow Dutch immigrant farmers set up the Holambra II co-operative near Paranapanema in southeastern Brazil, the area was known as “Hunger Valley”.

The co-operative, launched in the 1960s, built irrigation systems, introduced agricultural techniques and invested in equipment, changing the face of a district that had been populated by poor farmers subsisting on a few cattle and some corn and beans.

“There was no electricity, there was nothing,” says Mr Veldt, president of the Holambra Agro-Industrial Co-operative, which features a faux Dutch windmill at its entrance. “Now this region is known as the grain elevator of the state of São Paulo.”

The co-operative is a small example of the part foreign farmers have played in Brazil’s emergence as an agricultural power, whether through migration over the past century or more recent investments by large funds.

But today billions of dollars of investment are on hold as Brazil’s politicians consider a proposal governing land purchases. Nearly two years ago, Brazil banned foreign investors from buying large tracts of land. Since then private sector investment – an unintentional victim of a lack of clarity surrounding the ban – has shuddered to a halt. It is unlikely to resume until a new law – stuck in Brazil’s legislature – is passed.

Brazil is the world’s second-biggest soyabean and third-largest corn exporter and, although it is home to some of the biggest agricultural companies, the sheer scale of its industry requires international resources to achieve its potential, analysts say.

If investment in Brazilian farming falls, prices could rise globally. “If there are not enough resources to develop Brazil’s agricultural sector and increase supply there are two possible outcomes: one is investment in other areas of the world and the other is that commodity prices will have to increase,” says André Pessoa of Agroconsult, a Brazilian consultancy.

Farmers echo this concern. “If you want to attract skills and capital to improve the overall scenario of dairy farming in this country, the first thing you have to do is address how foreign farmers can purchase land,” says Craig Bell, a New Zealander and a founder of Leite Verde, a foreign-owned dairy farm. It uses a highly productive European variety of dairy cattle to produce milk in the tropical savannah of Brazil’s Bahia state. Leite Verde, which translates from Portuguese as green milk, is one of the lucky ones, he says, since it already has sufficient land.

The initial ban was prompted by government alarm at Chinese interest in buying Brazilian farms to help secure its supply of soybeans. “You are effectively selling a territory within a country to another country,” Homero Pereira, the congressman in charge of formulating the new law, told the Financial Times.

The measures under consideration would most likely include banning foreign state-owned companies, sovereign wealth funds and non-governmental organisations from purchasing farmland, while private projects would be approved on a case-by-case basis, Mr Pereira said.

Some investors are trying to work around the ban. Rather than trying to purchase property, Chinese groups were proposing loans or investment in infrastructure to Brazilian farmers in return for a guaranteed supply of soy, says Kory Melby, a US farmer working in Brazil as a consultant. But it was unclear if Brazilian farmers would embrace such offers.

There was a “cultural disconnect” between the Brazilian family-owned farms and the Chinese, who often sent large delegations of bureaucrats from state-owned companies to negotiate grain and land deals. “All my friends say they want to do business with the Chinese but they are wondering: ‘Who the hell am I dealing with here?’” says Mr Melby.

Some foreign companies have taken minority stakes, such as a purchase last year of 107,000 hectares of forestry land by Brazilian paper producer Klabin and a Chilean partner, Celulosa Arauco. These were relatively rare, however, amid industry estimates that proposed investments worth between $6bn and $7bn are on hold in the pulp and paper industry alone.

“Few of the big foreign companies are going to do anything until the law is clear,” says James Sinclair, managing partner at CFS Partners, a boutique investment bank in São Paulo.

For Brazilian companies, meanwhile, the removal of foreign buyers means less competition for land. “We are in some way against this law because we think it might hinder a little the growth of the country. But for our company, in the short term, it is advantageous,” said Arlindo Moura, president of SLC, one of Brazil’s biggest farming companies.

Just when this law will be passed is anyone’s guess – Brazil’s legislative agenda is jammed. But there is a tangible sense of frustration among would-be foreign investors with the legal hiatus. “Really, all of us foreigners just want to follow laws and produce some food,” says Brian Willott, a US farmer and consultant in Brazil.