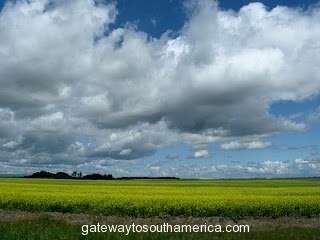 Some of the global listed companies with large land holdings and featured in many of the agricultural funds include. In addition to these there is a number of private companies with up to 1,000,000 hectares involved in Agriculture. ie El Tejar   in Argentina and Brazil.

Cresud (CRESY) is an Argentinean agricultural company that invests in land, cattle and technology. Cresud generates profits through the acquisition, transformation and sale of farmland. The main crops of the company are wheat, corn, soybean and sunflower. The company is rapidly expanding, and currently has 625,000 hectares under control in Argentina. It also owns land in Brazil (through Brasilagro), Bolivia, Paraguay and Uruguay.

Cosan (CZZ) is one of the largest sugar and ethanol manufacturer in Brazil. It is one of the biggest private landowners in Brazil, with a portfolio of approximately 204,000 acres, as of March 31, 2011. In 2008, it formed a venture with a U.S. company to purchase farmlands in Brazil.

Olam International (OLMIF.PK) operates as an integrated supply chain manager of agricultural products and food ingredients worldwide. The company owns oil palm and rubber plantations in West Africa, coffee plantations in Laos, almond orchards in Australia, dairy farming in Uruguay, farming of peanuts in Argentina, rice in Nigeria and Mozambique, and forestry concessions in tropical hardwoods in Gabon. In August 2010, Olam signed a contract with the government of Gabon to develop a special economic zone, which includes a 300,000 ha oil palm plantations and a facility to process 1 million cubic meters of timber annually. Olam International is also engaged in a massive contract rice-growing scheme in Nigeria, including 14,000 rice farmers on 15,000 ha. In addition, the company acquired the New Zealand company NZ Farming Systems Uruguay in September 2010. This company owns several dairy farms in Uruguay, on 12,500 ha of land.

Union Agriculture Group (UAGR) owns 41,860 ha of land in Uruguay. The properties are used for cattle, sheep, dairy and grains.

Wilmar International (WLMIY.PK) is a Singaporean oil palm company with large amounts of land mainly in Indonesia and Malaysia. Wilmar has an interest in Oil Palm Uganda Limited, which holds a 10,000 ha concession in Uganda. The government has agreed to source 30,000 additional ha on the mainland, including 20,000 ha of nucleus estate.

Brasilagro (BRCPF.PK) is owned by the Argentinean Cresud, that produces sugarcane and grain products comprising soybean, sorghum, and corn. The company currently has a land area of 174,840 ha and revealed its aim to accelerate the growth in its planting to 40%, taking 2010-11 sowings to 65,000 ha.

Bunge (BG) is one of the largest agriculture companies. It announced plans to acquire more than 10,000 ha in Brazil from the local firm Açúcar Guarani to grow sugarcane and has established a joint-venture with Japanese trading house ITOCHU Corporation to produce sugar and ethanol in Tocantins, northern Brazil. In August 2010, it announced plans to purchase oil palm plantations in Indonesia and Malaysia.

Magindustries (MAAFF.PK) has rights to manage a 68,000 ha eucalyptus forestry plantation, supported by a 500,000 tonne per year wood chip plant located in the Republic of Congo. In addition, the company owns rights in the Kouilou Potash project located in Congo.

KTG Agrar (KTG) manages more than 30,000 hectares in Germany and Lithuania and plans to expand to 40,000 hectares. Most of KTG Agrar’s land is leased, but the company wants to increase the amount of land it owns in order to benefit from the growing value of farmland.

São Martinho One is one of the largest producers of sugar and ethanol in Brazil, with a planted area of 114,000 ha.

Sintal Agriculture (SNPS) cultivates a range of crops, including wheat, barley, maize, sunflower, soy, rapeseed and corn. The company owns about 100,000 ha of agricultural land in Kharkiv and Kherson regions, Ukraine. y 2012/2013, the company aims to have a land area of 150,000 ha.

Contact the Gateway to South America team to learn about the best investment opportunities in the region. The company is a benchmark for foreign investors wishing to invest inArgentina, Brazil, Uruguay and Chile, providing expert advice on property acquisition and investment tours.