Income gap shrinks in Chile, for better or worse 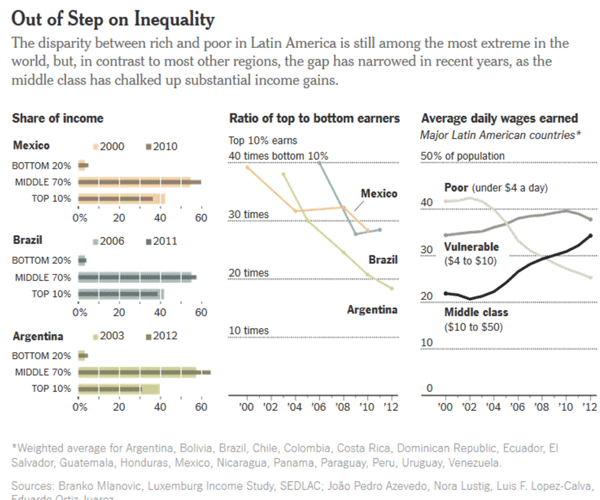 (This article was written by Eduardo Porter and was published in The New York Times on December 2, 2014)

Chile is a stellar performer by almost any standard. Income per person has grown fourfold over the last quarter-century. Today,many Chileans, rightly, see their nation as within shouting range of the advanced industrial world. Yet for all its economic success, the shanties sprawling outside of town are a sharp reminder that Chile has still not shaken the curse that has plagued Latin America for centuries: an immense gap between the haves and the have-nots that is virtually unparalleled in the rest of the world.

According to data from the World Bank, the richest 10 percent of Chileans capture $42 out of every $100 worth of disposable income, far in excess of the industrial countries Chile would like to see as its peers. In Spain, where the median income is roughly 30 percent higher than in Chile, the comparable figure is $25. In the United States it is $30. “Why is it that when we grow we cannot improve the distribution?” asked Juan Carlos Feres, president of the Overcoming Poverty Foundation here. “We have not managed to break the growth model that produces dynamics of exclusion.”

But while vast disparities continue to exist, Chile, like much of Latin America, is practically the only place in the world today where the income gap is actually shrinking rather than widening. “Latin America is experiencing a pervasive decline of inequality when in many other regions it is rising,” said Nora Lustig, an economics professor at Tulane University who has been closely following the trends. “The decline in the 2000s was bigger than the increase in the 1990s, so it’s not insignificant.”

Using the “Gini index,” research by Professor Lustig, Luis F. López- Calva of the World Bank and Eduardo Ortiz Juárez of the United Nations Development Program found that income inequality was lower in 2012 than it had been in 2000 in 16 of the 18 Latin American countries for which there was data to track the trend. The index ranges from 0 in impossibly an egalitarian utopia where earned exactly the same,  to 100 where every last penny was hogged by a single person.

While scholars can point to individual programs contributing to the narrowing gap in some countries — the sharp increase in Brazil’s minimum wage, for instance, or the expansion of pensions in Argentina to cover nearly all women over the age of 65 — nobody quite understands what is driving the region wide dynamic.

“It’s the million-dollar question,” said Augusto de la Torre, chief economist for Latin America at the World Bank. “The question is generating a new wave of research in the region and in my office.”
Even before there are more definitive answers, Latin American leaders have started to pat themselves on the back about the accomplishment. Trouble is, the improvement might be a symptom not so much of policy success but of deeply rooted economic vulnerability.

Government redistribution appears to have played some role in reducing the Latin American income gap. Government programs age |24 like the cash transfers under the Oportunidades program in Mexico or the Bolsa Familia in Brazil, have increased the income of poor families.

Still, Professor Lustig and her colleagues concluded that new government transfers and changes in pensions accounted for only 30 percent of inequality’s decline. Most of the action appears to have happened in the job market — before taxes and government spending kicked in.

Something, it appears, has flattened the distribution of wages. Whether this is good or bad news depends on what that factor is. It could be a result of Latin America’s substantial increase in the supply of university-educated workers, shrinking their wage premium compared with their less educated peers. “I do think that the return to a college education has declined,” said Jaime Ruiz-Tagle of the University of Chile. “It has declined because college education has become massive.”

The narrative isn’t entirely convincing, though. Mr. de la Torre notes the educational wage premium widened in the 1990s before starting to shrink in the early 2000s. This doesn’t fit the trend of educational attainment, which has been increasing steadily since 1990.

Other potential explanations don’t tell such an optimistic story. For one, perhaps Latin America’s new college graduates are inferior in some way. Latin America’s education boom has driven the proliferation of private colleges, some of which are of lower quality. The students may be of lower quality too — coming from families that received poorer elementary and high school education and are less prepared for college.

Together, these dynamics would reduce the skill level of newly educated workers, shrinking the wage premium they could command over those without a college education.

This story has a lot of traction here, where the government of President Michelle Bachelet this year passed an ambitious tax reform aimed at increasing government revenue by 4 percent of its gross domestic product, which it hopes to invest mostly to improve the quality of education. Mr. de la Torre fears, however, that this is not the entire story, either. The declining return to education, he worries, is not simply about the supply of educated workers. It also has to do with a decline in the demand for skill.

From soybeans to copper, China’s insatiable demand for Latin America’s raw materials pushed up the value of currencies across the region even as its cheap manufactured exports undercut Latin American countries’ rickety industrial base, reducing their demand for skilled workers.

“In this case, the fall of inequality would be bad news over the long term,” Mr. de la Torre told me. “We would be specializing in sectors that require less knowledge.”

What this augurs for Latin Americans’ future growth is hard to tell. But with Chinese growth slowing, there are increasing signs that the overall prosperity of a region that has long relied on commodity exports is now threatened.

A slowing China might also put an end to the shrinking income gap. The World Bank argues that the only viable long-term path for Latin American economies is to increase productivity growth, investing in more skill-intensive industries. That makes a lot of sense. But in doing so, it may have to join the rest of the developed world in confronting the challenge of achieving growth without widening the income gap even further.