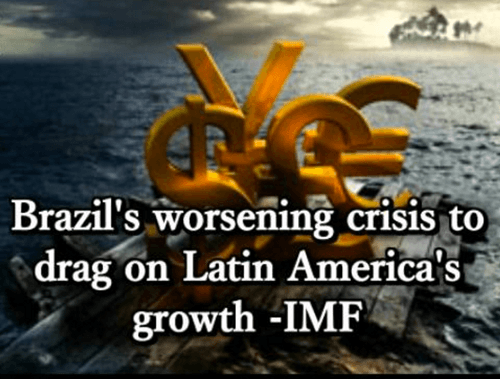 Gateway to South America on 31/05/2016 - 11:49 in All categories of countries are, Argentina-General, Brasil-general en, Chile – General, General of Uruguay, Paraguay - General, Perú-general en 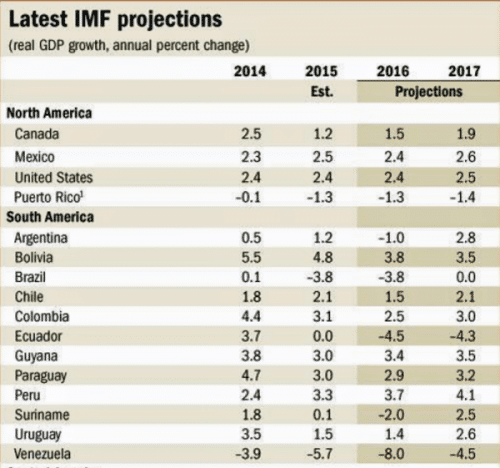 As the global recovery continues to struggle to gain its footing, growth in Latin America and the Caribbean has been marked down further and is likely to contract for the second consecutive year in 2016, the IMF said. The IMF’s latest Regional Economic Outlook for the Western Hemisphere, released on April 27 in Mexico City, projects that the region is set to contract by 0.5 percent in 2016— marking two consecutive years of negative growth for the first time since the Latin American debt crisis of 1982–83.

This rate, however, masks the fact that many countries continue to grow, modestly but surely, whereas a small number of economies— representing about half of the region’s economy—face recession largely as a result of domestic factors. The deceleration in activity reflects weak external demand, further declines in commodity prices, volatile financial conditions, and for some important domestic imbalances and rigidities, the report said. At the same time, many countries have continued to experience large exchange rate depreciations, mainly as a result of deteriorating terms of trade and external demand. For 2017, the IMF expects the region to bounce back to 1.5 percent growth.

Regional mix Brazil is mired in a deep recession with growth contracting by 3.8 percent—the same rate as in 2015—due to economic and political problems. Chile’s growth is expected to slow to 1.5 percent in 2016, reflecting subdued confidence and sluggish investment in the mining sector. Argentina and Venezuela face output contractions of about 1 percent and 8 percent in 2016, respectively. But Argentina’s medium-term growth prospects have improved noticeably as a result of an ongoing transition to remove domestic imbalances and distortions and correct relative prices. On the other hand, Peru’s economy has strengthened and growth is expected to rise further in 2016—to 3¾ percent, primarily boosted by ongoing mining investment.

Given the continued recovery in the United States, the growth outlook for Mexico and Central America remains relatively robust. Mexico is expected to grow at a moderate 2.4 percent in 2016. Countries in Central America have benefited from low oil prices and solid U.S. growth. Output growth for the region is projected at 4¼ percent in 2016. In the Caribbean, growth prospects continue to be favourable for the tourism-based countries. In contrast, growth prospects are deteriorating for commodity-based economies.

Downside risks The regional outlook is subject to various downside risks. Latin America remains particularly vulnerable to a stronger-than-expected slowdown in China—the destination for 15 percent to 25 percent of exports from Brazil, Chile, Peru, Uruguay, and Venezuela—and to further declines in commodity prices, the report said. A slowdown in China would contribute further to lower commodity prices and increase corporate risks.

A further deterioration of the situation in Brazil could lead to a sudden repricing of regional assets, reduced demand for exports among trading partners in the region, and an increase in perceived risk. The report also cited risks from a slower-than-projected investment recovery if tighter financial conditions and lower growth prospects lead to balance sheet adjustments among companies that are increasingly indebted in foreign currency. Managing the transition Growth prospects over the next five years will likely remain subdued, particularly for those facing lower commodity prices and weak investment. The IMF said that, throughout the region, policies and economic reforms should be designed to manage this transition.

A rapid pace of currency depreciation and higher sovereign spreads, alongside weaker fundamentals at the firm level, add to higher corporate risks since 2011, underscoring the importance of policy frameworks and monitoring of risks. The report also mentioned that growth in Latin America and the Caribbean is expected to remain below historical trends for the foreseeable future. Several reasons were cited, such as inadequate infrastructure networks, shortcomings in quality education, and relatively low export diversity, in addition to lower commodity prices. Structural policies aimed at resolving some of these bottlenecks could help raise potential output. The latest issue of the Regional Economic Outlook features three analytical chapters that further explore these key regional challenges: assessing corporate vulnerabilities in Latin America; analysing the degree of exchange rate pass-through in the region; and evaluating infrastructure investment in Latin America and the Caribbean.