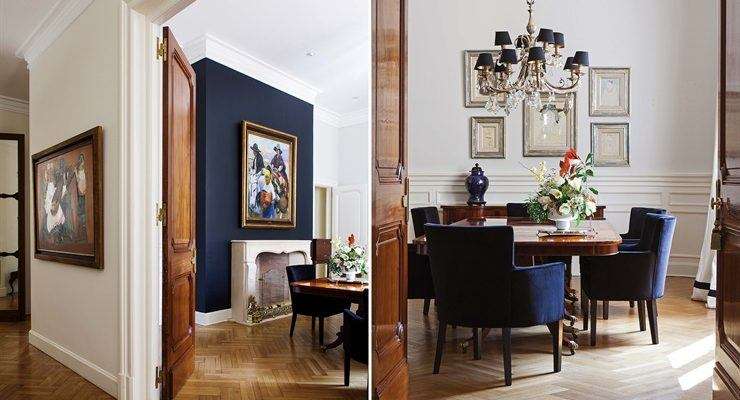 Gateway to South America on 05/05/2019 - 18:05 in All categories of countries are, Argentina Lifestyle, Argentina-General, Buenos Aires Residential, Commercial Argentina

In a property segment that still active despite the currency crisis, the real estate companies dedicated to the higher value segments explain their different strategies to sell properties that can reach up to USD 10 million or more. From Instagram to open houses

On Avenida Figueroa Alcorta 3200 there is a picturesque three-story home with its frontage covered with vines and windows with glass partitioned that are closed with huge wooden shutters, decorated with beds of white flowers.

The property attracts attention for anyone who walks the street full of luxurious homes and traditional embassies. A family hs lived there for more than 40 years, but the owner, who had already seen her children leave home, decided it was time to sell.

The company chosen to sell it was the Izrastzoff real estate agency, which is offering the 352 m2 property with pool and garden in the heart of Palermo Chico, asking USD 3.2 million.

Properties like this do not appear every day and, when they do, they require special treatment for sale. Iuri Izrastzoff, Marketing Manager of the firm, explains the behind the scenes of which is almost an artisanal selling process.

In the six months that the house has been on sale, different interested parties have visited it. The large developers discarded it because of the footage, which is why he points out, why they aimed at the medium and small ones.

“They are doing their numbers, but the change in the Building Codes has increased the cost of approval by almost four,” he says, although he says there are also some people are tempted to acquire it for their own home.

The real estate agency has been working for 45 years in the middle and higher segment of the market in Buenos Aires with a focus on the northern corridor that goes, in the Federal Capital, from Retiro to Núñez.

For its portfolio, properties such as the 14th floor of the Kavanagh Building, a Petit Hotel of Recoleta were the exclusive Algodón Hotel and the Sastre Estrugamou Palace, located on Basavilbaso Street in Retiro, a centenary architectural relic of 1400 m2 and 12 rooms valued, sold for USD 10 million.

“These types of properties need a special marketing strategy. When you have properties that are almost commodities, you can not do much to differentiate yourself. But in these yes. Because it is likely that the buyer does not look, for example, at real estate portals, “explains Izrastzoff.

With an average ticket of USD 600,000 for its units for sale (clarifies that this amount rises in Greater Buenos Aires), where the real estate agency does not want to neglect the middle sector mostly there.

Bresson Brokers was started six years ago as a boutique real estate company, but at the end of 2017, they decided to take the leap and open a concept store on the street in Callao and Alvear.

They started with the intention of offering a different experience within the premium segment, so the traditional offer of a real estate company decided to add a sushi bar to the front where they also serve cocktails, organize events and even exhibit works of artists they represent.

“I always say that the first impression is the same thing that one can expect to happen next.

There are 1,000’s of details that have to be taken care of, “reflects Francisco Villamayor, its CEO. Izrastzoff that recognizes that in this sector the sales strategies change quickly and to catch the exclusive client they aim at, they have to stay wide awake.

“The marketing channels vary. A few years ago it was email marketing, but today Instagram is very interesting. The properties are very visual and that network looks for that type of more aesthetic images, “says the manager, who explains that each of their brokers also replicates the content in their own networks to achieve greater reach.

In the real estate, they have an internal photographer dedicated to taking maximum care of each image and, also, they bet on training their staff to align the visual strategy and network management. “Before Instagram was a form of branding, now it’s a sales channel.

Learning to edit a photo was not something that salespersons were asked to do. Now we do internal networks workshops on how to do this, “he acknowledges.

Even so, what never goes out of style is word of mouth, especially in this segment where every detail is taken care of to the extreme. “Human interaction is fundamental. We are also present in the normal marketing portals, but although the flow of queries is decreasing, they are going up in WhatsApp.

There are more and more places where you have to be and you can not neglect any of them, “says Izrastzoff. For Bresson, the photo image plays a fundamental role in the sale proposal.

The real estate one takes its name in honour to the famous French photographer Henri Cartier-Bresson and the bar was baptized Henri. Its aesthetic mimics that of a decoration magazine and, in addition to the professional photography service that counts for the advertisement of each property, it offers a home staging, where the owner is given decoration suggestions so that space comes out more carefully in the photo. “I value your house to defend the price,” adds Villamayor.

On the other hand, from the real estate company Kantai point to their experience as a sales strategy within the sector. “The image, the social networks, the word of mouth and the prestige gained by more than 40 years of activity place us at the top of the premium sector and the permanent contact with potential customers for these products,” says Fernando Cancel, president of the signature The real estate company, which manages properties that start at USD 3000 per square meter, clarifies that adds to the commitment of the presence in social networks and portals, but it is the trajectory what its president is responsible for highlighting as a fundamental charter.

However, the sale process begins long before, with an interview to know in depth the owner and the characteristics of the property. The CEO emphasizes that each property is followed by a single broker that handles each detail of the sale and is available to answer any query of the interested parties: “We have a model of associated brokers in which we share the business with them and we work together.

However, when selling such unusual properties, brokers have an extra job: try to dodge the curious who never fail to turn up. Horacio Benvenuto, General Manager of Izrastzoff, assures that he recommends his team to identify the interested persons before coordinating the visit so as not to waste time with those who take advantage of the occasion of sale to walk through some exclusive apartment in the city. “Especially in this segment, we have to take care of our owners.

It is full of people who want to know how the properties are inside, “he acknowledges. Trends that are imposed From Ocampo, Gabriela Goldszer emphasizes that within the premium market the luxury segment stands out more and more.

“A key aspect is that an essential dimension of luxury is symbolic, and this is the natural territory of brands. For this reason, traditional brands of luxury such as Fendi and Versace are already breaking out as a sub-segment “, a trend that is already installed worldwide and where they are working in Argentina with cases such as the Decó-Armani Casa project. The enterprise that will carry the style of the exclusive Italian firm (in charge of decorating and furnishing the common spaces) will offer units in Recoleta of between 50 and 100 m2 with high-end amenities.

As a novelty for the sales process in this niche, Bresson is committed to promoting the open house concept, an event where the property opens for potential buyers to meet for a short period of time. “The more people see it, the better.

In most western countries it is very common, but here there are still more fears mostly to do with security. It is something exclusive, we invite some clients or colleagues, there is something to drink and sometimes there is the owner who presents the house, “says Villamayor, who tested the method with a house in Palermo Chico that had been on sale for two years but he sold the operation a week after the open house.

Even so, Bresson does not neglect the classified portals because, says the CEO, even those interested in buying a property of more than USD 1 million start their search on those sites.

“Then we have our own networks and our website, more curated and with similar followers that target a specific target,” acknowledges the founder of the real estate agency that focuses its work on used residences in Recoleta, Palermo, Belgrano, Núñez and Puerto Madero. an average ticket of USD 650,000.

When it opened the premises, the real estate company had 35 published properties; today they are 115. Villamayor recognizes that one of the properties in his portfolio that helped him make the leap was a duplex with terrace in the coveted area of ​​La Isla. “It was a building of a very important architect, with the National Library on one side and the Embassy of England on the other. In our first year that helped us to position ourselves, “he recalls.

After 2018 when financial uncertainty covered the sector, Benvenuto adds that Izrastzoff’s numbers showed not only did sales decline but also much longer times were needed to complete operations: “Since June, the times have lengthened significantly.

In the past, property marketed at a reasonable price and suitable for credit was sold within two months. Today the credit for mortgages is not there and the operations that are done are those that were priced at a little lower price than a year ago or very rare exceptions where there is a hostile offer and the owner is willing to negotiate and accept.

It is a market 40% or 50% down in the number of operations that a year ago. ” For Villamayor, the times of each sale lengthened despite the fact that the segment could defend itself better against the overall fall of the industry: “Before opening it news office it published 20 properties and closed five or six per month.

Now we have increased the number of sales, but the listed stock is accumulating. Before a reasonable period was three months, today we can be six months “. “Sales depend on the economic situation of the country, but there are always people interested in living in a good place,” concludes Cancel, who explains that most of his clients are executives of large national or foreign companies that prioritize, in particular, the location and quality.

Source: Translated from the La Cronista