Gateway to South America on 21/05/2018 - 17:58 in All categories of countries are, Brasil Residential, Brasil-general en

A Coastal Retreat in Brazil

A FIVE-BEDROOM HOUSE ON THE BRAZILIAN COAST

This five-bedroom house is a short walk from a white-sand beach on the northeastern coast of Brazil, about 30 miles from the popular tourist destination of Natal. Built-in 2006, it is part of a small gated development of 16 homes called Quintas do Coqueiral. 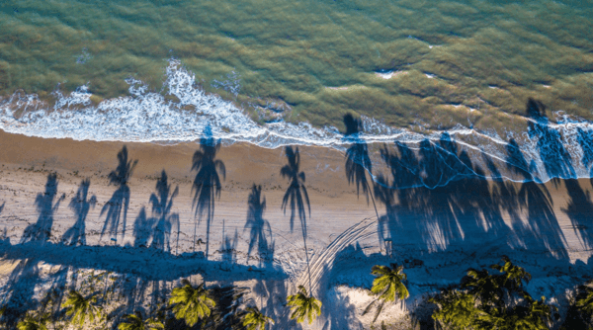 The 4,300-square-foot house sits on about 1.2 acres covered in palm trees and grass. Visitors enter through two large wooden doors, framed by pillars. The double-height foyer opens to a living room and covered patio. There is a pool and Jacuzzi in the backyard, with a wooden deck. 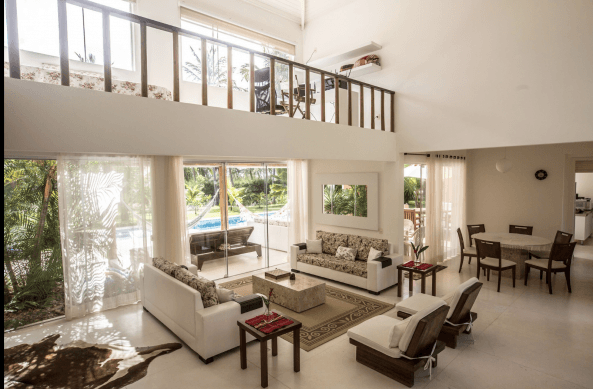 The floors on the ground level are white marble concrete, a form of concrete with sand and marble grains mixed in, said Mike Smith, owner of Brazil Beach House, the company marketing the property. The doors and windows are trimmed in Brazilian hardwood, and the exposed beams and pillars are eucalyptus, Mr. Smith said. You can see more information here.

From the foyer, stairs lead to a mezzanine level currently being used as an office. There is an open-air deck off the mezzanine. 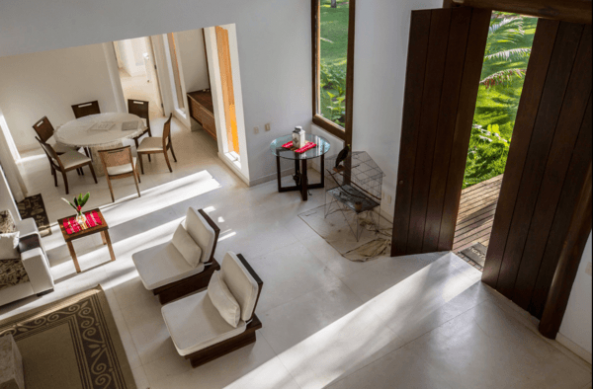 All the bedrooms are on the ground floor. In one wing, there are two large bedrooms, each with a walk-in closet; the master has sliding glass doors that open to the pool deck. Two smaller bedrooms are in the other wing. All the bedrooms have en-suite bathrooms with marble counters.

A dining room, television room and another bathroom are also on the ground floor. The kitchen is off the dining room, overlooking the pool area, and has two refrigerators, an electric drinking fountain and a six-burner stove. 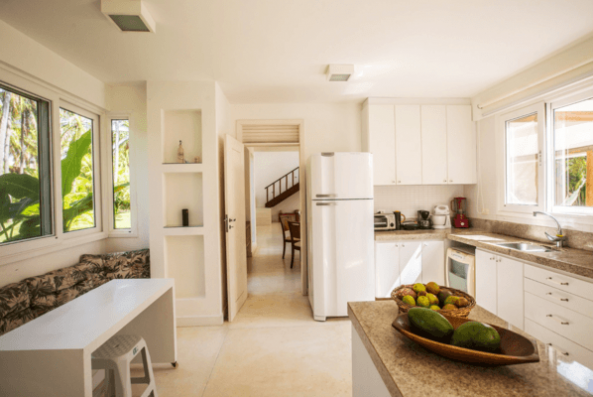 The maid’s quarters, adjacent to the kitchen, include a bedroom, a bathroom and a small attached garage, large enough for a single car. There is also a detached two-car garage on the property.

The furniture is not included in the asking price but is available for an additional 100,000 Brazilian real (or about $31,000), Mr Smith said. 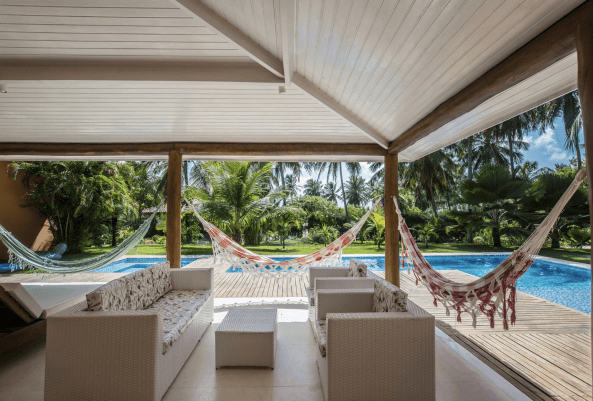 The property is about a half mile from the village of Maracajaú, a popular spot for diving. Natal, about a 45-minute drive from the house, is the capital of the state of Rio Grande do Norte, with a population of about 850,000. The closest airport is the Governador Aluízio Alves International Airport in São Gonçalo do Amarante, about 25 miles away, but most international flights are routed through Rio de Janeiro or São Paulo.

Brazil is coming out of a lengthy recession following years of political turmoil. Home prices fell 3.23 per cent in 2017 and 5.38 per cent in 2016, when inflation is factored in, according to the FipeZap Index, which tracks sales in 20 Brazilian cities.

In recent years, “supply exceeded demand considerably,” said Andreas Hahn, a senior partner with Hahn Consulting in São Paulo. But lower prices and an improving economy are bringing buyers back to the market, he said. And Brazil’s economy is expected to grow 1.9 per cent in 2018, according to the International Monetary Fund.

“For the first time in several years, the Brazilian real estate economy is returning to an equilibrium state,” with supply and demand in better balance, Mr Hahn said.

Sales in the middle-price range were hardest hit by the downturn, said Marcello Romero, chief executive of Bossa Nova Sotheby’s International Realty in São Paulo. The lower end of the market was boosted by government subsidies, he added, while the high end was less affected.

n São Paulo, where he is based, the volume of sales was up 46.1 per cent in 2017 compared with a year earlier, according to data from Secovi, a property industry association.

“We think that the worst moment is over,” Mr Romero said. “Especially in the major cities, most of the developers are preparing their launches soon.”

Although there is no official data available on sales in the Natal area, agents said prices have fallen between 10 and 20 per cent in the last three years.

“The northeast is more of a holiday marketplace,” said Steve Gallagher, owner of Brazil Overseas Property, and was, therefore, more vulnerable when the economy slowed. “Political uncertainty,” he said, also plays a major role in the market as potential buyers await the results of the presidential elections later this year.

“I expect confidence to grow within the market at the beginning of 2019,” Mr Gallagher said. “And we should see property prices increasing steadily from then on.”

There are already signs the market is picking up, Mr Smith said. “The last quarter of 2017 saw the first signs of growth.”

In the last five years, the value of the Brazilian real has dropped by almost 40 per cent against the American dollar, he said, making Brazilian real estate more affordable for buyers from the United States.

In the Natal area, he added, homes in gated communities priced between $150,000 and $600,000 are the most popular with foreign buyers.

WHO BUYS IN NATAL

And foreigners make up about 25 to 30 per cent of the buyers on the coast, said Mr Smith, who primarily works with foreign prospects. Of his clientele, about 20 per cent are from Portugal, he said, with buyers from Italy, Spain, Scandinavia, the United Kingdom, the United States and Canada each making up about 10 per cent of his business.

There are no restrictions on foreigners buying property in Brazil, except in rural or border areas, said Juliano Ribeiro Lomonte, a real estate lawyer based in Natal. But foreigners do need to obtain a tax registration number, known as a CPF, to buy property.

Buyers typically make a 20 per cent down payment, and the final deed is signed before a notary. “The whole process normally takes between 30 to 60 days,” Mr Smith said.

The transaction is straightforward, but buyers should hire a lawyer to oversee the process, agents said. “A lot of times, sellers don’t know about the taxes or restrictions on the land,” Mr Lomonte said.

There is a local transfer tax of 3 per cent on this property, and notary fees are usually about 2.5 to 3 per cent of the sale price, Mr Smith said. A lawyer might charge USD $2,000 to USD $5,000, he said, depending on the property and the lawyer.