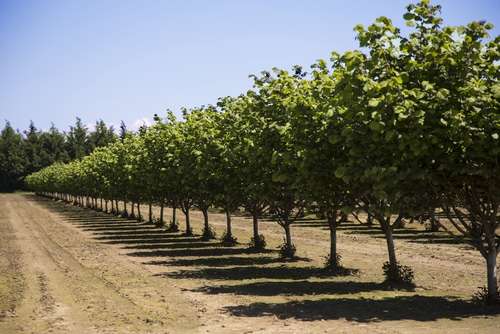 The Italian company’s goal is to double the surface area currently planted with European hazelnuts in the country, making Chile the leading supplier of its plants in both North and South America.

Thirty years ago, European hazelnuts were practically unknown in Chile. The Italian group Ferrero came to Chile through AgriChile, and farmers timidly began to see how the species performed in the country. Their efforts were driven by the increasing use of mechanization to do the work and the fact that the chocolate company was in a position to purchase their entire output.

Three decades later, the move has had a profound impact on fruit growing in the central-southern region of Chile, where hazelnut crops have jumped from 100 hectares to 24,455 according to Agriculture Ministry data (although the industry puts the figure at over 30,000 hectares). These crops have the potential to continue to expand, with projections for over 60,000 hectares over the next ten years.

Ferrero Hazelnut Company General Manager Eric Schlesinger oversees the part of the entity that sources hazelnuts for the chocolate company from Italy. He notes that 65% of the firm’s products contain the product and that he is grateful for Chile, which has become an ever more important hazelnut supplier for the organization.

“We have a lot of optimism, trust and willingness to continue to grow in Chile. We see it as an increasingly important country, where we’ve had a lot of support and good experiences. As such, we are not only optimistic but trust in Chile a great deal,” he said.

The numbers back him up. AgriChile is practically the only buyer of European hazelnuts in the country. It has 4,200 hectares of its own plantations in the Maule and La Araucanía Regions, and 700 employees, which is equivalent to around a quarter of the Ferraro Hazelnut Company’s entire workforce. As such, the entity sees Chile as a strategic supplier, though it sources hazelnuts from seven locations and the largest scale producers continue to be Turkey and Italy.

Eric Schlesinger says that his company continues to have new projects in Chile focused on the processing, innovation and sustainability areas, and that its decisions have not changed despite increased uncertainty related to the current political situation, the social protests of 2019 and the process related to drafting a new constitution.

“We haven’t made any changes… We work with countries like Turkey, Azerbaijan and Georgia, so Chile’s situation is much simpler by comparison because it is a democratic very modern and advanced country. As such, we have no plans to slow down our projects. On the contrary, we anticipate expanding our presence in Chile,” he explains firmly. Schlesinger highlights the company’s plans to make a US$40 million investment in a new hazelnut processing plant in the Ñuble Region, which will be operational within two years. He also mentions a plan to improve AgriChile’s internal management, which will involve approximately US$3 million.

Ferrero Hazelnut Company has operations similar to AgriChile linked to farming and hazelnuts in six countries, including South Africa, Argentina and Australia in the southern hemisphere.

They arrived in Australia ten years ago, but Schlesinger rejects the idea that Australia might compete with Chile due to the fact that the company has not found the climate and soil conditions to match the success they have had in Chile.

He also explains that Chile is already the company’s third most important hazelnut supplier after Turkey and Italy and that it will play a key role in the coming years, particularly given the group’s plans to focus on growth in North America, South America and China. This has been the focus of Ferrero’s investments over the past five years, which have included the purchase of chocolate production industries and the expansion of its own plants’ production capacity.

“Chile has a very special place in our operations. Our plan is for our factories in North and South America to be supplied from Chile, which is a very important shift because they have sourced hazelnuts from various locations in the past…. Today we believe that the priority supplier of our hazelnuts will be Chile, and we trust that 50% of our supply on the continent will come from Chile in the next 10 to 15 years,” he notes.

The General Manager of Ferrero Hazelnut Company insists that they continue to strongly encourage Chilean farmers to plant European hazelnut trees due to the high quality of the nuts that they are obtaining.

“We see Chile as a very safe bet, and I am fully confident that it is also a safe bet for the future because we are looking to do much more than we do today… The current surface area could double, and there would still be opportunities for growth,” he explains.

Eric Schlesinger notes that maintaining the quality of the fruit is the only condition for the country to continue to be a priority source in the future, along with the sustainability.

“The limit to Chile’s growth is farmers’ capacity to adapt their approach to hazelnut farming in response to new demands. This is a real challenge that we will have to face,” he notes. He explains that the company published its production guidelines in various areas last year through a statute for hazelnuts that is focused on regenerative agriculture.

“We are about to launch the first regenerative agriculture operations manual in Chile. We are using a digital book format to provide very precise instructions with all of the details needed to align with the principles, though we do recognize that this process will take some time,” Eric Schlesinger explains, noting that the publication will be launched in March or April of this year.

Both the General Manager of Ferrero Hazelnut Company and AgriChile Director Camilo Scocco agree that they are looking to use the company’s production units in Chile as pilot projects to disseminate the innovation and sustainability initiatives focused on regenerative agriculture that the company is developing.

“Chile is also a sort of innovation laboratory for us in terms of hazelnut production,” Schlesinger notes.

The pull of China

Like other chocolate companies, the Ferrero Group has its sights set on China, a market that has only recently become aware of chocolate and has per capita consumption of around 500 grams a year. This is much lower than the 6 kilograms consumed at the global level on average and the 10 kilograms that each person in countries like Germany or England consumes each year.

Although it is one of the markets that has been most impacted by COVID-19 due to the fact that the virus first appeared there, the General Manager of Ferrero Hazelnut Company is confident that sales have recovered and returned to normal levels, and are even higher than they were prior to the pandemic.

“China is the market that presents the greatest potential. All of the chocolate companies are investing there. It is an exotic product, but the new generations love it,” he says, adding that Chile could also provide hazelnuts for the group’s factories in that country.