Has China has become Latin America’s lender of last resort ?

Has China has become Latin America’s lender of last resort ?

As soon as Argentine President Cristina Fernandez de Kirchner landed in Beijing this week she began lauding new deals with what she called the world’s “No. 1 economy,” ranging from two proposed nuclear power plants to joint space exploration.

With her country’s economy contracting and its supply of dollars dwindling, Fernandez arrived Monday looking for help from China, which has already lent Argentina $14 billion since 2007. By the end of her trip Thursday, the two countries had agreed on $6.8 billion of financing for the construction of two hydroelectric dams and a railway, according to Chinese state media. 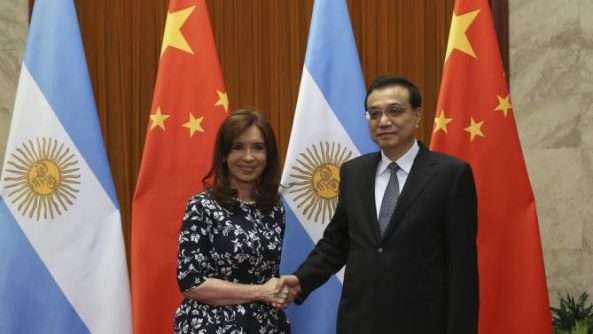 “Long day, but very fruitful,” her Twitter account read earlier this week. “Argentina confirms its presence and importance in the No. 1 economy of the world. The reception couldn’t be better.”

The trip, and Fernandez’s enthusiasm, highlights China’s growing role as a kind of lender of last resort for Latin America. Beijing has become a frequent destination for the region’s presidents, especially populist ones who have spent freely over the past decade but are now grappling with a collapse in the prices of oil and other commodities that their economies produce and export.

While American and European lenders have stayed away from such risky countries, or demand economic and political reforms in exchange for loans, the more than $100 billion China has lent Latin America come with fewer human rights or good governance strings. They do, however, often require countries work with Chinese companies on housing, rail and other infrastructure projects, or pay the loans back with millions of barrels of oil for years to come.

Over the past decade, China has helped sustain Latin America by buying soybeans, iron ore, oil and other commodities, in the process lifting millions in the region into the middle class and helping shield governments from economic woes elsewhere. Now, as China’s economy slows, and sends commodity prices to record lows, the Asian giant is moving even closer to its partner countries, especially in Latin America, by helping to rescue them.

In early January, Ecuadorean President Rafael Correa left Beijing with $7.5 billion in new financing, adding to the $10 billion China is estimated to have already lent Ecuador, according to a report by the U.S.-based think tank, the Inter-American Dialogue. That same month, Venezuelan President Nicolas Maduro touted what he said were Chinese pledges to invest another $20 billion in his country, a figure analysts said may include formerly announced deals. China had already loaned Venezuela $50 billion since 2007, the report found.

Cui Shoujun, an international relations professor at Renmin University in Beijing, said the financial support is designed to build long-term allies around the world as China seeks to remake a global order long dominated by U.S.- and European-based institutions such as the World Bank and the International Monetary Fund.

“We are not calculating the gains and losses in the short period but building a long-term relationship,” Cui said. “It’s a kind of partnership, not just Latin America relying on China and China wanting resources.”

Kevin Gallagher, an expert in China-Latin America relations at Boston University, said that even with currently low commodity prices, Chinese leaders also want to secure energy and resources as the country’s economy prepares to overtake the United States’ as the world’s biggest, possibly by next decade.

“China sees (Latin America) as very strategic because of natural resources,” Gallagher said. “They might not need it anymore but now they’re pushing their firms around the world and see it as an opportunity to get market share.”

The Chinese money comes as a relief for Venezuela, Ecuador and Argentina, which have become financial pariahs by either defaulting on billions of dollars in loans, nationalizing the assets of foreign companies or both. Venezuela and Argentina are also trying to tame runaway inflation and a collapse in their currencies.

The China Development Bank charges higher interest rates than the World Bank, but China also offers subsidized loans with lower rates, according to a study co-written by Gallagher.

But even with nearly $4 trillion in reserves, China is showing signs that its generosity has limits.

Although Maduro said before his China trip that he would “take on new projects” to rescue Venezuela’s economy, he finished his Chinese tour with only vaguely defined investments.

Despite the world’s biggest proven oil reserves, Venezuela has been hit by social unrest and a deteriorating economy. Now, China must figure out whether it can keep Maduro’s government alive just so that it can pay its bills, said Margaret Myers, director of the China and Latin America program at the Inter-American Dialogue.

“In the case of Venezuela, it seems like China is at least more hesitant in terms of doling out large loans and considerable finance and rightly so,” Myers said.