The Green Option in Paraguay for Diesel Replacement

Paraguay is one of the few countries in South America in which investors can purchase and hold land directly and in any desired legal structure (which is not possible for example in Brazil, Argentina, and Uruguay).

Under the program, an investment structure purchases cattle land in the Paraguay Chaco. Investancia provides high-level Paraguayan government support, references and land title guarantees for the land developments. They also apply for the small farmer and indigenous population support programs.

The cattle land that is owned directly by investors already shows existing cash flow and IRR when professionally managed.

The land is then gradually reforested during the regular cattle rotation process (no loss of cattle revenues) with their elite perpetual trees. The same land will now also produce for 50+ years second-generation biofuel, protein, honey, and carbon credits.

Their elite tree genetics have been certified by the Ministry of Agriculture and are genetically adapted to the various region of the Paraguay Chaco.

The produced crude biofuel and carbon sequestering is presented for certification by the RSB as second-generation (use of non-food land) representing 100% GHG savings in relation to fossil fuel. The crude oil is exportable worldwide as a premium biofuel feedstock.

Investancia planting program enhances considerably the returns on the land through the additional operation’s income from biofuel and protein. Additionally, the underlying land value will increase significantly because the land is transformed from deforested cattle land to high yielding “silvopasture” land (combination of cattle and forestry agriculture) with potential additional carbon credit income.

The nuts or pods from the Pongamia tree, traditionally grown in India and Australia and highly adaptable to the Chaco region, yield high-quality oil when crushed, with the meal or seed cake that remains extremely valuable for use in animal feed rations. 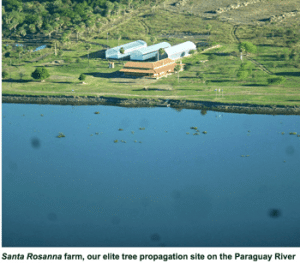 The ideal structure of a Pongamia plantation also lends itself to a high-level ‘silvopasture’ system in which land can be used to produce significant quantities of HVO, alongside cattle, sheep or forestry outputs.

Investancia has selected Paraguay as the focus for our elite Pongamia development based on extremely cost-effective land values, the availability of large areas of non-food pasture within the Paraguay Chaco, a perfect production climate for the plantation trees and a highly accessible government and legal structure which enables investors to buy or rent land, as required.

Since securing import certification for their genetics program in 2014, through the Ministry of Agriculture of Paraguay, they now produce locally genetically identical tree clones from the elite material, that they originally imported from the US and Australia.

HVO (Hydrotreated Vegetable Oil) is also known as ‘green diesel’ or, in the US, as ‘renewable diesel’. Due to its advantages over fossil diesel and first-generation regular biodiesel, HVO is rapidly gaining popularity in European and global markets with an increasing number of companies investing in this new technology. Key HVO players include Neste, Total, ENI, ConocoPhillips, BP, Petrobras, Shell, Nippon Oil and REG.

HVO is a cleaner product than fossil diesel, can be blended without limits and also upgraded to jet fuel. It’s a drop-in fuel which can be used without blending limits and without any damage to the existing diesel engines. HVO can thus retroactively ‘clean-up’ the existing car, truck, boat, airline diesel infrastructure.

Emissions from land-use change, including deforestation, are the second-largest human-caused source of carbon emissions worldwide after the burning of fossil fuel.

The Paris Agreement (COP21) adopted by 195 countries and now ratified by China and the US (representing 40% of the world’s CO2 emissions) is to keep global temperatures “well below” 2.0C by limiting the number of greenhouse gases emitted by human activity to the same levels that trees, soil, and oceans can absorb naturally.

Fuels produced from afforestation have an immediate effect on the reduction of carbon emissions. Drop-in green fuels can be used in the existing vehicle fleet to immediately reduce emissions and are therefore a key part to reducing global transport emissions. The International Energy Agency (IEA) on its part says biofuels could provide 27% of the world’s transport fuel supply by 2050.

From full certification to off-take agreements with major refineries

Investancia has established a 725-hectare elite Pongamia tree propagation site and research station in the northern part of the Chaco directly on the Rio Paraguay on the border with Brazil.  The current development will be followed by the construction of a crushing mill with direct port access for the cost-effective delivery of green crude oil worldwide. Their elite tree production, service, and research centre is the largest and best-positioned feedstock source for HVO production in the region. Investancia has also exclusively partnered with the world’s best Pongamia genetic providers from the US and Australia.