Gateway to South America on 21/05/2014 - 11:57 in All categories of countries are, Argentina-General, Argentine farms 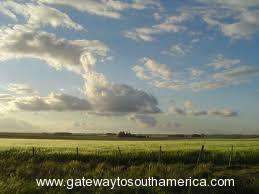 Global warming predictions usually evoke gloom-and-doom scenarios about the ill effects of a changing climate on the planet. But it turns out that some people — and Argentina in general — could benefit from climate change, which would lead to a rise in agricultural production across the country over the next few decades, according to a report presented yesterday by the Environment Secretariat and the Economic Commission for Latin America and the Caribbean (ECLAC).

Despite the positive projections, it’s not all good news for farmers, who would eventually see their livelihood threatened by decreasing soil quality as a result of the persistence of one-crop farms and hotter temperatures that will eventually erode harvest yields.

Soybean production will experience a 45-percent increase by 2050, according to the report, while corn output will follow with an 11-percent increase and wheat six percent, all due to the higher amount of carbon dioxide in the atmosphere due to global warming.

Carbon dioxide is a key element in the photosynthesis process through which plants grow.

“The results show that the impact will be positive, considering the effect of a higher concentration of carbon dioxide in the atmosphere. Soybean will see the most benefits, and there will also be smaller increases in the production of wheat and corn,” the report outlined.

Yet global warming is also likely to have negative effects that could affect the economy as a whole.

José Luis Samaniego, head of the Sustainable Development and Human Settlements area of ECLAC, estimated the country’s Gross Domestic Product could drop 0.5 percent per year due to global warming, a figure that ranges between one and two percent in other Latin American countries.

“We have observed benefits for the agricultural sector in Latin America, but they are not always maintained as time passes. There have been large losses of biodiversity due to global warming, as well as more health problems, such as malaria and dengue, which have been observed in new regions,” Samaniego said. “At the same time, fishing and tourism have been affected due to increases in the sea level and because of floods in seaside areas.”

For now though, farmers can take comfort in favourable conditions for their crops.

“The changes currently taking place in the country’s weather are favouring the production of crops and cattle pastures. Soybean will benefit greatly because it can resist an increase of up to three degrees celsius without a decrease in yields,” Graciela Magrin, an official at the National Institute of Agricultural Technology (INTA), said. “But there will be some really good years and some really bad ones.”

Soy, corn and wheat farming will be boosted mainly in the south and west of the Pampas region. In the Northwest, corn production is expected to decrease, but soy and wheat will see increases. Meanwhile, in the central area of the Pampas, crops will be affected negatively by temperature increases.

“We studied the NOA and the Pampas regions, which concentrate 95 percent of the cereal and oilseed farms in the country. We see rises in the production of the three crops,” Gabriel Rodríguez, INTA official, said yesterday. “Nevertheless, we have to implement measures to adapt to global warming in the areas where crop performance will be affected.”

But farmers face further challenges due to global warming. Climate phenomenons such as El Niño and La Niña will produce stronger rains and droughts, which will lead to large fluctuations in yearly harvests. The quality of crops is also expected to decline due to the current intensity of production systems.

An excessive change in temperatures, particularly if it increases beyond a level that crops can tolerate, could also lead to negative effects for the sector. According to the report, in the decade between 2020 and 2029, temperatures in Argentina will rise one to 1.5 degrees Celsius compared to the average level registered between 1961 and 1990.

“Intensive production systems and harvest in marginal areas can seriously affect the physical and chemical conditions of crops. The soybean ‘monoculture’ could lead to higher losses in carbon and nitrogen levels than if crop rotation were applied,” the report warns. “At the end of the century, the amount of carbon found in soil could drop by 30 percent in the Pampas region and 45 percent in Salta.”

The positive effect on agriculture is absent in other sections of the report, which warn that greenhouse gas emissions are expected to be six times higher in 2100 than the values registered in 2005.

ECLAC and the Environment Secretariat reported possible negative impacts on water sources (the River Plate, River Uruguay and River Parana), health (malaria and dengue) and biodiversity (deforestation in the north and the Esteros del Iberá region).

“Argentina is suffering greatly because of global warming. We are not an industrial country and we mainly produce commodities, which depend on weather,” Environment Secretary Omar Judis said. “Emissions will keep growing and they have to be controlled. But countries are far from fulfilling the agreements that have been signed.”

Reprinted from the BA Herald