The G20 comes to Argentina 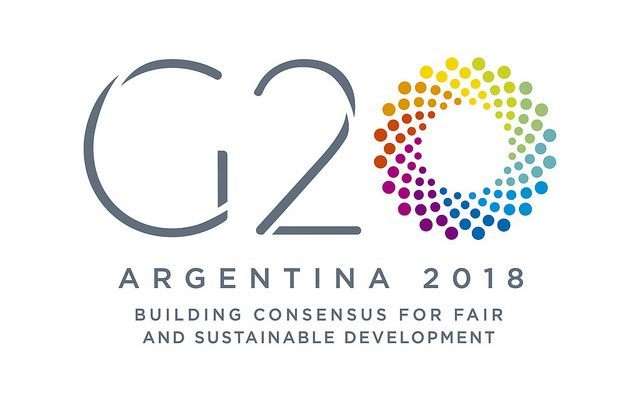 The 2018 G20 Buenos Aires summit will be the thirteenth meeting of Group of Twenty (G20). It will be held in 2018 in the city of Buenos Aires, Argentina. It will be the first-ever G20 summit to be ever hosted in South America so it is a proud moment for the region.

The Group of Twenty (G20) is a leading forum of the world’s major economies that seeks to develop global policies to address today’s most pressing challenges. The G20 is made up of 19 countries and the European Union. The 19 countries are Argentina, Australia, Brazil, Canada, China, Germany, France, India, Indonesia, Italy, Japan, Mexico, Russia, Saudi Arabia, South Africa, South Korea, Turkey, the United Kingdom and the United States.

The G20 was born out of a meeting of G7 finance ministers and central bank governors in 1999 who saw a need for a more inclusive body with broader representation to have a stronger impact on addressing the world’s financial challenges. The G7 invited leading markets – both developed and emerging – to form a new ministerial-level forum: the G20.

In 2008, amidst the global financial crisis, the world saw a need for new consensus-building at the highest political level. Since then, the G20 summits have been attended by heads of state or government, and the G20 was instrumental in stabilizing the world economy. Since then, its agenda has expanded to include additional issues affecting financial markets, trade, and development.

President Mauricio Macri of Argentina assumed the one-year G20 presidency on 30 November 2017, during an official ceremony in Kirchner Cultural Centre in Buenos Aires, Argentina. President Xi Jinping of China (2016 host), Chancellor Angela Merkel of Germany (2017 host), and Prime Minister Shinzo Abe of Japan (2019 host) all gave messages of support which were shown at the ceremony.

The first G20 meetings of the Argentine Presidency began in Bariloche in early December 2017. They were attended by central bank deputy governors and deputy ministers of finance, as well as the sherpas (official representatives to the group). During the buildup to the G20 Summit between world leaders on 30 November 2018, Argentina will host over 45 meetings at various government levels and areas in 11 different cities throughout the country.

All of which makes it a good time for Argentina and its president to be on the world stage. Mauricio Macri.  Having seen at first hand the dangers of defensive protectionism in Argentina, Macri may be able to provide a much need reinforcement of G20 support for free trade and multilateralism to avoid the path that Venezuela took leading to dictatorship and extreme poverty.

Following on from Argentina’s financial crisis in 2001, when in chaotic circumstances the country abandoned its convertibility peg to the dollar and defaulted on its debt, Argentina was for the best part of a decade and a half in the vanguard of Latin America’s experiment with left-wing ‘populism’.

Led first by the Peronist Nestor Kirchner from 2003 to 2007, and then until 2015 by his wife Cristina Fernández de Kirchner, Argentina successfully renegotiated its debt burden and recovered strongly.

But the Kirchner’s took an increasingly controversial approach towards economic management and clashed frequently with local business and private investors. A raft of subsidies and protective tariffs created serious economic distortions and contributed to high levels of inflation.

Argentina found itself largely shunned by international capital and cut off from financial markets. Indeed, although a member of the G20 – albeit with an economy smaller than all other members apart from South Africa – Argentina’s market is so small that it is labelled a ‘frontier’ market – alongside minnows such as Mauritius and Bangladesh – in the widely used MSCI index of Morgan Stanley.

Macri’s election in 2015 has marked a sharp change in that direction. The successful businessman and former mayor of Buenos Aires won with a small majority. But he moved quickly to restore Argentina’s access to international capital, reaching an agreement with investors who had refused to accept the terms of the earlier debt deal and then successfully raising finance on the bond markets.

The economy is being managed in a more consistent way. Many subsidies have been lowered or eliminated. Statistics have become reliable and some of the wilder price distortions eliminated. At the same time, however, Macri has resisted pressure from right-wing critics to start reducing the fiscal deficit at a faster rate in order to protect social spending. Public works programmes have been introduced in order to generate jobs and improve transport, water and sewage provision in poor urban areas.

There is much to be done. The fiscal deficit remains worryingly high, with the primary deficit (before debt payments) still more than 4 percent of GDP. Macri has barely begun the reforms needed to reshape the top-heavy public sector, for example. The economy remains highly dependent on capital inflows. This is pressurizing the current economy as grain exports are down due to an extreme drought and the USD currency has risen strongly at the same time due to rising interest rates and inflation there.

Even so, for the moment, his centrist, market-friendly approach seems to be paying off. In October last year the pro-government alliance – Cambiemos, or Let’s Change – scored an impressive victory, winning a majority of the congressional seats up for election. Peronism – the blend of nationalism and labourism that has dominated Argentine politics since the mid-1940s – has been seriously weakened, opening up the possibility of a second presidential term in 2019.

It is even possible to hope that, much as Emmanuel Macron’s triumph last year in France reinvigorated the European political centre, Macri’s success might provide a centrist and progressive model for Latin America. In a region where the appeal of extremist ideologies is still strong that would represent a welcome change and would make Argentina an ideal example of leadership in the G20.