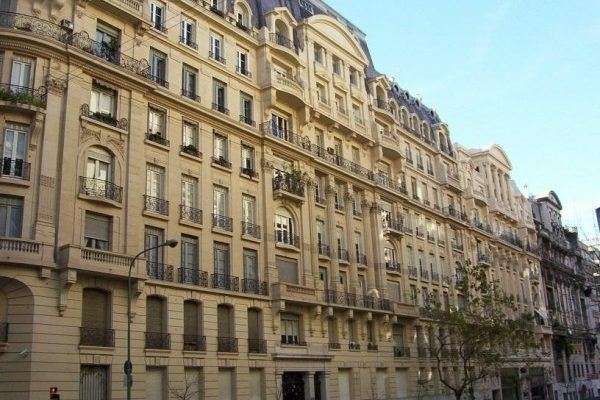 Gateway to South America on 26/11/2021 - 13:41 in All categories of countries are, Argentina Lifestyle, Argentina-General, Argentine history, Buenos Aires Residential

French architecture in Buenos Aires was developed under the auspices of the government of the nation. In the first years after independence from Spain, the new country needed professionals and naturally would not bring them from the country from which it had recently gained independence.

This is how, during the first half of the nineteenth century – a turbulent and dangerous time in Europe – many renowned architects and French engineers, who were very eager to be hired to work away from the danger of wars and coups, had a reach that was so far from their own land, high-ranked professionals who left a great impression in Buenos Aires.

Among the first buildings that rose in the thriving independent homeland, was the neoclassical facade of the Buenos Aires Metropolitan Cathedral, designed by architect Prospero Cetellin. It is said that, although the design is signed by Cetellin, it would have been a draft of Pierre Benoit.

About the same time, another emblematic building began to be built: the Teatro Colón of Buenos Aires, under the watchful eye of Charles Pellegrini.

Urban design was under the leadership of Pierre Benoit, mentioned above, a multifaceted marine architect and engineer, born in 1794 in Calais. He arrived in 1818 in Argentina and then nationalized. His son Pedro, born in Argentina, was a prolific engineer and also very well known.

Another important milestone was the arrival in 1868 of Jules Dormal from Belgium, who had gained a degree as engineer from his home country. After that, he graduated from l’Ecole Polytechnique in Paris as an architect.

Dormal left a visible and high-quality legacy, such as the magnificent Brazilian Embassy, inspired by the Jacquemart-André Museum.

Amongst the multiplicity of works that Dormal carried out were the designs of the Park February 3, the Avenida Sarmiento, the Gates of Palermo and the Steps of the Hippodrome.

Further works by Dormal include the second building of the Opera House, the building of the National Bank of Villa Urquiza and some of the pavilions of the Buenos Aires Zoological Garden. 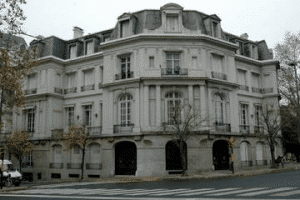 “The Water Museum is housed in a building modeled on the French style of architecture, with infrastructure developed by an Englishman, the design of a Norwegian architect and a Swedish engineer, and the hands of Italian and Spanish workers.”

There is repeated criticism, heard and read often, that the influence of French architecture in Buenos Aires should not be seen as so important, and that the Spanish and English influences are equally significant.

Without detracting from such contributions, it must be clarified that although many buildings have been lost, destroyed as the result of a misunderstood modernity, the influence of French architects and French schools is the most significant mark on quality and development in the city.

By Norbert Maillart-August, French architect born in Saint-Just-en-Chaussée in 1856. He worked in Chile, Uruguay and Argentina.

Built off the new Plaza Lavalle. This imposing building, which occupies the entire block between Talcahuano, Lavalle, Uruguay and Tucumán Streets, opened in 1910. Like other public buildings, it was modified from the original style, the result of a lack of a respectful attitude towards the original design of the architect, repeated in many interventions by younger architects and authorized by the city government. 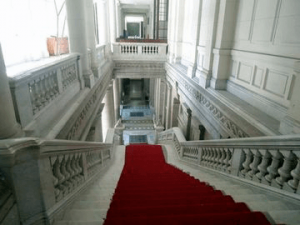 A French academic style of the École des Beaux-Arts, in a monumental version of large columns and arches. It has a large gallery facade and a marble staircase. Its internal courtyards give light and air to the building, which is absolutely symmetrical. 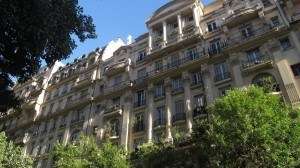 This is a building of the eclectic style of classical baroque and the Second Empire by the architects Eduardo Sauze and Auguste Huguier. The materials were brought from France, and the floors of oak from the Slavonia region of what is Croatia nowadays. 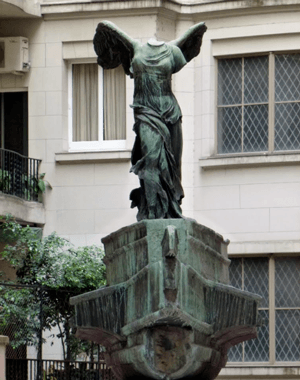 The French style was not only limited to buildings, but was manifested in the decoration of each building designed by Gallic architects. It influenced the purchase of furniture, curtains and lights of French manufacture, and French woodworkers for fine finishes, superb details that can be seen in buildings that are open to the public.

In the year 1889, Charles Thays, born in 1849 in Paris, France, came to Argentina and then nationalized. Charles Thays was a disciple of Edouard André, a renowned architect, landscaper and French botanist.

As an architect, urban planner, naturalist and landscaper, Thays developed an extensive career in Argentina. He founded the Botanical Garden and was the creator and remodeler of 69 squares and public places in the city of Buenos Aires and 16 in the provinces.

As Director of Parks and Walkways since 1891, he influenced the design decisions and remodeling of each park in Buenos Aires. He implemented the afforestation of streets and avenues with native trees of northern Argentina, such as Jacarandas and Tipas.

“… gardens especially up along the free spaces of the avenues. Where there was usable land, even if it was less than ten meters wide, there, meticulous as a Japanese, Mr. Thays appeared with his workers, to transform it into harmonious shade. Literally lurking in every corner there was possible tender verdure, and planting of corolas between propitious trees.”

The significant influence of Thays, continued for more than a century by his descendants, gave context to the buildings and then spread through the extensive parks that he designed and executed.

Buenos Aires is not composed only of buildings. Urban design, parks and squares are marked by French influence. Parks, being the heritage of the city, have not been demolished, as many buildings have, but rather, have survived the waves of new influence.