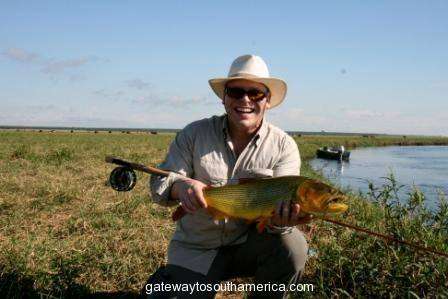 Lia Schleimer on 02/09/2020 - 01:13 in All categories of countries are, Argentina Lifestyle, Argentina Mendoza, Argentina-General, Argentine farms

Argentina offers some of the best fly fishing in the world. Whether you’re a beginner or an experienced angler; looking to fish in lakes, brooks or rivers, for salmon, trout, or Dorado; wading, from a boat or from the shore; staying in five-star lodges and Estancias, or camping and cooking your catch on a fire beneath the stars, Argentina has it all, and with the further advantage that the fishing season runs during the northern hemisphere winter, from mid-November until mid-April. 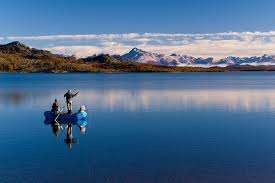 Hugo Lesser is an Anglo-Chilean-Peruvian based in Salta in north-west Argentina. He is the founder of Estados, which sells beautiful leather goods handmade in Argentina.

Buenos Aires province has the most easily accessible fishing, with day trips possible from the capital, via an hour-long journey by motorboat up the River Plate. The best fly fishing in the region though can be found further north, casting for the Golden Dorado from a boat on the Parana River Delta. This large (between five and twenty-five pounds), native, yellow-tinged, salmon-like, freshwater fish has a powerful jaw and large teeth and is known as the Tigre del Rio (River Tiger) because of the aggression and vigour with which it fights when hooked. The Parana Delta is enormous, covering around six thousand square miles, so you will need a guide.

Further north, in Corrientes province, the Ibera Marshes National Reserve provides stunning sub-tropical boat fishing, again for the Golden Dorado, which in the reserve must be returned to the river once having been caught. That’s no detraction from the sport though, as the lively, spirited fish leaps madly out of the water once hooked, between ferocious runs away from the boat. In smaller brooks and channels the smaller Surubi and Pac can also be found, the latter feeding from the fruit and seeds that fall from the trees by the river, giving its flesh a natural infusion of flavour.

Northern Patagonia is the mecca of Argentine angling, having more than enough environments and breathtaking locations to keep the most seasoned angler happy for years. Accessible from Bariloche, which is a two-hour flight (or a twenty-hour bus ride) from Buenos Aires, the region can be subdivided into three distinct zones, the northern zone around Junin de los Andes, the central zone around San Martin de los Andes and Bariloche, and the southern zone around Esquel. Rainbow and Brown trout, introduced by Britons in the late nineteenth and early twentieth centuries, abound in numerous lakes, rivers and streams, most of them all but deserted and with the stunning backdrop of the Andes mountains to enjoy.

The principal rivers of the northern zone are the Aluminé, Quillén, Malleo, the Chimehuín and Pulmarí, while the central zone offers the idyllic Queñi, Escondido, Filo Hua Hum and Traful lakes (the Traful also contains land-locked salmon). In the southern zone, the quietest of the three in terms of other anglers if not in terms of fish, a cluster of lakes and rivers in the foothills of the mountains allows for world-class wading, and the cold clear waters arriving from snow melting above provide a perfect environment for the fish to breed, grow and thrive.

In terms of getting around the region, you’ll either need to book a trip with one of the numerous agencies in any of the towns mentioned above, or hire your own transport and set off yourself (armed with good maps and advice), as the distances are large. Many of the rivers pass through large private farms that offer high-class accommodation to anglers, so that is another option for those on a higher budget.

Further south, in the barren landscape and harsh climate at the tip of the continent near Rio Gallegos and the Rio Grande in Tierra del Fuego, the salmon and trout introduced from Scotland in what was once a centre for British ex-pat sheep farmers have grown to sometimes shockingly large sizes as a result of the abundant, nutritious food supply available where the rivers flow into the icy waters of the southern Atlantic Ocean. The Rio Gallegos, near the city of the same name, contains trout and salmon, while the Rio Grande (again near the city of the same name) further south contains sea-run trout, which like salmon migrate from the ocean upriver to spawn. Flights run from Buenos Aires to both cities and take a couple of hours.

A license is required to fish in Patagonia, available at Bariloche airport or at most fishing shops. The various legal requirements for anglers can be found on Esquel Outfitters’ website, along with a wealth of other information. Generally speaking, guided fishing including accommodation in Argentina costs from US$500 to US$2000 a day. Citizens from countries in the European Union can receive a 90-day tourist visa on arrival in the country for free, whereas those from the US and Australia currently pay a reciprocal visa processing fee for the same visa. The currency in Argentina is the Argentine Peso.  The climate in Northern Patagonia is warm, dry and pleasant throughout the fishing season, in Southern Patagonia it is sunny and warm through windy, and in Buenos Aires and Corrientes, it’s hot and humid.

Contact the Gateway to South America team to learn about the best investment opportunities in the region. The company is a benchmark for foreign investors wishing to invest in Fly Fishing opportunities in Patagonia, providing expert advice on property acquisition and investment tours.

Lia Schleimer was born in Buenos Aires, Argentina. She received her education in Buenos Aires, Geneva, Switzerland and the University of Colorado. Prior to her real estate career in Buenos Aires, Lia owned her own real estate company, Orca Propiedades in La Paz, Baja California Sur, Mexico, and was associated with Sotheby’s International Real Estate in California, Santa Fe, New Mexico, as well as in Puerto Vallarta and Cabo San Lucas, Mexico. In addition to property sales, her work with Sotheby’s included operations in the affiliation of two Mexican real estate offices, in Cabo San Lucas and Puerto Vallarta. She was responsible for coordinating all marketing and advertising, as well as overseeing budgets and tracking all listings. Prior to her real estate career, Lía was a Certified Paralegal, giving her a strong background in contracts, title search and the laws affecting real estate. Being raised in a tri-cultural background, resulting in fluent English, Spanish, and French; including an extensive background in real estate, marketing and business in the U.S., Mexico and Argentina, has provided Lia with a unique set of skills. She is well acquainted with regulations and the foreign investment laws that govern the sale and purchase of property by foreigners, can provide concise communications on a multi-cultural level and negotiate effectively to provide an unparalleled representation and service to her clients.