Gateway to South America on 14/03/2014 - 10:27 in All categories of countries are, General of Uruguay, Uruguay Farms, Uruguay Farms 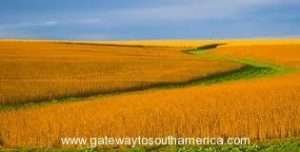 Farm land sales in Uruguay totaled a record 1.3bn dollars in 2013, involving 1.868 sales of 370.927 ha, which is up 10% on 2012, according to the Ministry of Agriculture, Livestock and Food ministry’s Stats Office, DIEA. Uruguay’s farmland covers approximately 17 million hectares.

In the last fourteen years according to DIEA, 7,486,000 hectares of farmland in Uruguay changed hands which is equivalent to 44% of the total area. The number of operations reached 32,492 and the sum involved, 10.365 billion dollars.

Three provinces had the most land  sales, 33% and 29%, (124.172 hectares and 384 million dollars respectively) during 2013 and they were Tacuarembó, Lavalleja and Rivera. However this was exception since the Chilean-Brazilian-Finnish group, Montes del Plata, which is building a pulp mill along the shore of the River Plate expected to be inaugurated later this year, sold its land holdings of 45.000 hectares in Rivera and Tacuarembó for which it collected 140 million dollars, to a US pensions’ fund.

However the most expensive farmland is not in any of those three counties but in Soriano which produces the most crops. The average sale price in Soriano for a hectare was $6,565 US dollars, followed by neighboring Colonia and San Jose with $6,079 US  and $5,974 US dollars respectively. This area to the southwest of Uruguay has high-yield crops and dairy farming.

2014 looks to be starting off as another record year for farm sales to foreigners with El Tejar selling  its Uruguayan farms to UAG ( another agro fund). That agreement will allow for the incorporation of the 67,000 hectares of cropping land giving UAG a total of 170,000 hectares, equivalent to three times the size of the province of Montevideo.