Evo Morales resigns in disgrace after a rigged election result 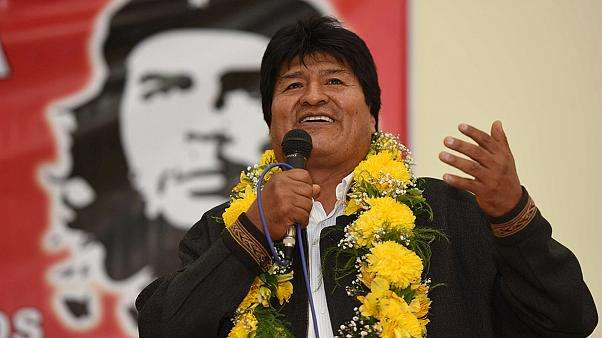 Evo Morales, the elder statesman of the Latin American left, resigned as president of Bolivia on Sunday after his offer of new elections failed to quell an increasingly violent uprising following the release of a scathing international audit that found “clear manipulation” of the vote last month in which he claimed victory.

The resignation was an ignominious ending to a 13-year tenure that saw Bolivia’s first indigenous president fight poverty and transforms cities with state investment even as criticism of his authoritarian tendencies rose.

But ultimately the 60-year-old socialist who once commanded landslide victories found himself isolated – the heads of the armed forces and police called on Morales to step down, and the country’s main labour union asked him to resign if doing so would calm a nation rapidly plunging into mob rule.

Morales’s resignation followed that of several socialist ministers and lawmakers as tensions in South America’s poorest nation soared. The leader of the chamber of deputies from Morales’s Movement for Socialism, Victor Borda, stepped down after his home in the mountain city of Potosí was set ablaze and his brother was taken hostage by a group of opposition protesters.

Elected in 2005 as part of the “pink tide” that saw a gaggle of hard-left leaders come to power in Latin America, Morales claimed to have won a fourth term in the October 20 vote. That sparked violent protests that have left at least three dead, police abandoning their posts and buildings set ablaze.

The Bolivian electoral commission had shown Morales beating his closest challenger by just over 10 percentage points, the margin required to avoid a runoff. Had the vote gone to a second round, Morales and his socialists would likely have faced a more united opposition with a good shot at unseating him.

At a hastily arranged news conference in La Paz, Morales said on Sunday he would accept the recommendation of the OAS – a Washington-based multilateral institution made up of Western Hemisphere nations – and replace the electoral commission, which the organisation accused of overseeing significant “irregularities.”

“I have decided to convene new national elections so that, through the vote, the Bolivian people will be allowed to democratically elect their new authorities,” Morales said.

Former president Carlos Mesa, who finished second to Morales in the vote last month, said Morales shouldn’t be a candidate in the new elections because he is “responsible for this fraud that caused this social convulsion”.

Morales, asked by local reporters whether he planned to run, didn’t respond.

“For the moment, candidacies should be secondary,” he said. “The priority is to pacify Bolivia, to go to a dialogue, and to agree on how to change the Supreme Electoral Tribunal working with the Legislative Assembly.”

But he said he would not resign: “I have a constitutional role and my period ends on January 21 next year.”

Yet Morales’s plans were the subject of intense speculation as his grip on power appeared to be failing. In a news conference on Sunday afternoon, Williams Kaliman, head of the armed forces, “suggested” that Morales step aside. That announcement came a day after Kaliman had warned that the military would not be deployed against anti-Morales protesters.

General Vladimir Calderón, head of the national police, also asked for Morales’s resignation to “pacify the nation in this difficult times”.

Afterwards, Morales was filmed exiting the presidential plane in Chimoré, a town in Cochabamba.

The announcement of new elections came after police guards at the presidential palace in La Paz abandoned their posts at the weekend, part of a broader strike in which police said they would not be used as political tools of the government. The strike threatened to undermine Morales’ grip on power.

Strikes, protests and roadblocks have paralysed South America’s poorest nation. In the town of Vinto late last week, opposition protesters abducted the socialist mayor, dragged her through the streets, doused her with red paint and forcibly cut her hair.

As protests continued, Morales denounced the “coup” against him. He called for a dialogue with the main political opposition parties – a call they promptly rejected.

“I have nothing to negotiate with Evo Morales,” Mesa tweeted at the weekend. “He has lost, lamentably, his link with reality.”

Yet his strongest blow came from outside Bolivia – in the form of the OAS audit, which Morales and his Movement for Socialism had pledged to honour.

In its preliminary report, issued on Sunday, the organization said: “The manipulations to the computer system are of such magnitude that they must be deeply investigated by the Bolivian state to get to the bottom of and assign responsibility in this serious case.”

OAS auditors said the voting transmission system was not “100 per cent monitored” or under the control of the appropriate technician. Information was at one point redirected, thus “it is not possible to have certainty about the results.”

The OAS also said that “good practices” were not applied to the official vote counting because the system “permitted someone to take control” of parts of the process that were supposed to be secure.

The integrity of the software was not respected, auditors said; at one point, they said, the system was frozen and fixed in a manner that violated the “essential principles of security”.

The OAS concluded that 78 of 333 evaluated vote counts from polling stations showed irregularities and manipulation. The last 5 per cent of the vote counting was especially “unusual”, auditors said, in that it showed a significant increase for Morales and a sharp decrease for Mesa.

Morales has been credited with significantly reducing Bolivia’s poverty rate through state intervention. But he is also accused of a gradual turn toward authoritarianism.

In 2016, he gambled on a national referendum that would have allowed him to sidestep term limits and seek a fourth term. He narrowly lost that vote, amid a scandal over allegedly fathering a child out of wedlock – but then secured a court ruling that enabled him to run again.

His opponents call that an abuse of power – one that fits a pattern that they say has also included heavy-handedness with anti-development protesters, the press and political opponents.