El Paseo del Bajo will open in Buenos Aires in 2019

In one year it is anticipated that the Paseo del Bajo ( under pass )will be inaugurated, which is the work of the Porteño local government – together with the Corporación Puerto Madero, connecting the Illia highway with the Buenos Aires-La Plata and 25 de Mayo. This new 7.1 km long corridor will channel heavy transportation away from the city centre. It will create 60,000 m2 of new green spaces, which integrate the underpass roof with the newest neighbourhood in the city.

But, beyond the mobility improvements that the work will bring, neighbours, real estate developers and brokers celebrate the initiative for the increased urban valuation that it will add, especially in the southern part of the Huergo area that was always more degraded than the north. Last year, two auctions of land carried out by the Agency of Administration of State Property (AABE) attracted the largest real estate players.

One, located on Avenida Ingeniero Huergo 467/475, between Avenida Belgrano and Venezuela, was Consultatio, the developer was Eduardo Costantini, paying USD 20 million. The other, the area of Huergo, Mexico, Azopardo and Venezuela streets, was by Argencons, who already knows the area since he built Quartier Madero Urban just a few blocks from there.

The arrival of Costantini to the area surprised more than a just a few, because he is noted for investing in premium projects, but does not normally venture into residential proposals for the middle class: “these will be students apartments with a format that includes good amenities and services;  at a low cost, but the units will be small. ” It will be a 30-storey tower with 42,000 m2 of a buildable surface that he plans to inaugurate in 2021. As the terrain of 3920 m2 will be available at the end of this year, the work begins in April of 2019, coinciding with the theoretical inauguration of the Paseo del Bajo. Costantini will develop opposite (with Alan Faena) Oceana Puerto Madero in Dique 2, he emphasizes that “no doubt the new green spaces will beautify this area because it adds a garden and greater communication and integration with Puerto Madero and vice versa. It will be very well perceived. ” Gonzalo de la Serna, CFO of Consultatio, adds: “As the projects have a good reception in the market, surely other developers and investors will also come to this district.”

According to their market data, there are units in the area where prices have reached USD $4500 to us $5000 per m2. “and we feel it is a precedent to build to these values,” he saids. Meanwhile, the lot that Argencons obtained is 5,887 m2.  He will build Quartier Nuevo Madero, two apartment towers with a park in the middle. It will involve 70,000 m2 of construction to build more than 800 apartments of 1 and 2 bedrooms. They intend to launch plans to do so during the last quarter of this year. The investment will be around US $200 million (they paid USD 26 million for the land). Carlos Spina, commercial manager of Argencons, emphasizes: “The area had already been tested and validated because our Quartier Madero Urbano was so successful.

It has immense potential fundamentally, because of the work of the new underpass. Previously Huergo land was used for trucking companies and logistics etc, but with this new underpass, it will change it radically. ” In turn, Diques 1 and 2 of Puerto Madero will be a Miami because they were the towers ‘Adam and Eve’ of Vizora,  the two of the SLS related, the London Eye and in front of our site, Oceana of Consultatio,  it will be like being in Brickell, UK, he says excitedly. Argencons is also developing a mixed-use complex – Quartier Puerto Retiro – At the end of Catalinas Norte, so it will be present at both ends of the new corridor.

On the other hand, the AABE plans to auction this year an estate of 5.3 hectares in Catalinas Sur, demarcated by the streets Azopardo, Py and Margall, Gualeguay, the highway Buenos Aires-La Plata and Avenida Brasil, between the neighborhoods of La Boca and Puerto Madero, which will be Apt to build office towers of triple A standard. Interested in this auction – Catalinas sur II – was Gonzalo Monarch, president of the Monarch Group: The company, specializing in residential premium, having bought three lots in the La Boca, close to Usina del Arte. The goal: To turn these into middle-class housing projects. Its owner refused to advance details but confirmed that they are closing agreements with the city, nation and private banks to grant them financing. Each project will have more than 15,000 m2 of construction and hope to announce the first one in September.

Meanwhile, between 2020 and 2021 the finished units will be delivered. “This area will change a lot with the new underpass; it is a very positive works project which also motivated us. We are working with the city to generate the changes that the area needs and so that with the intermediate credits of the banks, we can start to invest a lot, “concludes Monarch. Among the entrepreneurs, who for more than five years have committed to the development of the area, is Marcelo Lopez, partner of Arquitectonika, a developer that has in his professional record, several buildings built in Barracas, La Boca and Parque Patricios, among others. “There we find the new potential of Puerto Madero,” says the architect.

The firm advances with the construction of a mixed-use project on the corner of Lezama Park, at the crossroads of Paseo Colón and Brasil Avenues, which delivered already the first stage of 90 units. While the current selling price of these units is an average of USD $3000m2, the land value in the area is USD $650 per square metre, “each year the demand grew, the sales value and the request for rents escalated exponentially. Lopez adds: “It is an area that spills Puerto Madero with a highly competitive land and square metre value and similar connectivity. More companies will continue to occupy the vacant sites due to the accessibility offered by the route from the south and the West, plus the northern area’s potential with the works of the Paseo del Bajo. 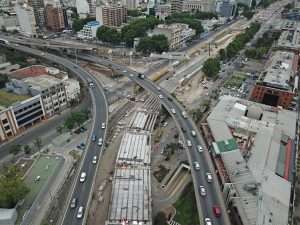 With a view to adding more surface construction in the area, he said that they are “in the process of continuing with other developments with the possibility of incorporating more investors.” A few blocks away await Astillero Catalinas Sur, which will be built on a property of the early twentieth-century development, located in Azopardo and Avenida Juan de Garay, next to the new corporate headquarters of Banco Santander Rio.

It is a 14-storey building with four subfloors and more than 20,000 m2 of new construction. There will be 170 residential units (lofts, plus 1 and 2 main rooms) and 180 parking spaces. The total investment is US $30 million with an average sales price per m2 is around US $3500. Leonardo Rodríguez Nader, CEO and co-founder of the developer CMNV, the investment community, tells how he landed there: “When we identified the property where the project will be developed, we visualized the momentum that was beginning to take the south of the city. Some public investments were beginning to take place, such as the refurbishment of Lezama Park, the art plant, the low highway on Pedro de Mendoza and some museums (MACBA, Mamba).

This seemed to us to impact on the way we live and consequently, the area was going to grow. After several months, other public investment projects appeared, such as the Metrobus and the Riberena Motorway, which is consolidating the area as one of the districts that grew the most in the last decade. 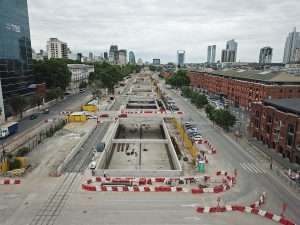 In short, the area has improved its security and infrastructure. We continue to evaluate and search for land to continue to grow with investments in the area. With regard to the increase in the real estate value that his project will have after the inauguration of the underpass, Nader said that the selling price of its units “can continue to grow”. He added: “The first buyer we had, within two years, obtained a price increase close to 70% in dollars terms.” Beyond the public policies that are implemented to promote investment and movement in the area, its geographical location, proximity to highways and means of transport are a great differential.

Marcelo Di Mitrio, an owner of a real estate company in the area, says: “neighbourhoods in the south of the city that are gentrified under the axis of Parque Lezama-Barracas, San Telmo and La Boca-are experiencing a strong repositioning process in lifestyle and pricing. The underpass and the completion of the Metrobus works will generate a strong positive impact on the area. These neighbourhoods have much to offer to real estate development because they were neglected for decades: they have a high potential product of the land available and a privileged geographical location. “

Alejandro Ginevra, President of NGV Group, developer of the mixed-use complex Madero harbour that is in Dique 1 of Puerto Madero, also celebrated the improvement that the works will contribute: “We are sitting with the city to think about the future of this whole area, since a real estate development is envisaged on the island Demarchi; The project of the Sports City, which at some point will be made; the growth of Dique 0, La Boca and Puerto Madero, as well as the Arts District. So, the real estate future of the next few years will be in this whole southern zone. ” The entrepreneur concludes: “The underpass will be a before and after for the whole city, it will change its face and is the most important work that has been done in the past 20 years. It’s emblematic! It will be a completely different city that will integrate with Puerto Madero, with parks and eradicate the trucks from the city center. It’s great news that this is finally being realised. ”