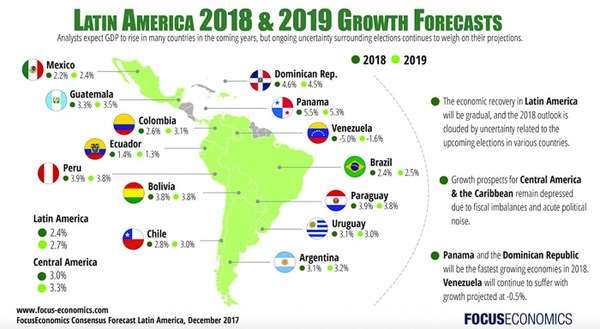 Gateway to South America on 15/12/2017 - 09:30 in All categories of countries are, Argentina-General, Brasil-general en, Chile – General, General of Uruguay, Perú-general en

Economic growth in Latin America sped up in the third quarter, as the long-awaited recovery takes hold. Preliminary data reveals that regional GDP expanded 1.7% annually in Q3, above Q2’s 1.1% rise and the strongest rate of growth since Q1 2014. Recovering confidence, accommodative financial conditions, rising commodities prices and a healthy global backdrop drove the region’s economic performance in Q3, as the economy puts last year’s recession firmly behind it.

Taking a closer look at the individual economies for which data is available, momentum firmed in major player Brazil, driven by strengthening household consumption and an improvement in investment. Low inflation, near record-low interest rates and an improvement in confidence bolstered economic activity in the third quarter. Growth also gained steam in Chile, supported by a resilient labor market and higher export revenues. Similarly, higher commodities prices also boosted Colombia’s external sector in Q3, and GDP expanded at a quicker pace than in Q2. In contrast, Mexico’s economy defied the regional trend and decelerated, as natural disasters weighed on its performance and high inflation eroded household spending.

Although GDP data is still outstanding for regional heavyweight Argentina, indicators for Q3 suggest that economic activity accelerated notably. Meanwhile, Venezuela’s economy likely remained in free fall with little respite despite higher oil prices. Oil production dwindled in Q3 due to a lack of investment and mismanagement, and the gradual rise in oil prices is nowhere near enough to right the economy’s sinking ship.

Although the acceleration in growth is positive for the region, the pace of the recovery will be gradual considering last year’s performance, and economic slack persists. Moreover, macroeconomic imbalances need to be addressed to put growth on a sustainable path. The region’s election cycle is, however, generating significant uncertainty regarding reforms and growth prospects.

In the short term, upcoming elections in Brazil and Mexico are narrowing the window of time to enact badly-needed reforms, as politicians turn their attention to their campaigns. In late November, Mexico’s Finance Minister, José Antonio Meade, resigned to become the 2018 presidential candidate for the PRI party. Policymakers in Brazil are likely to begin distancing themselves from President Michel Temer, who is deeply unpopular. In the medium-term, there is a risk that the upcoming votes will yield more divided parliaments, complicating policymaking. Chile’s November elections yielded a fractured congress, and the simultaneous  presidential vote revealed a small margin of victory between the top two contenders. A second round of the presidential vote will take place on 17 December.

On the other hand, new political figures in parliaments could be positive for the region’s outlook, if they manage to win strong mandates and usher in macroeconomic reforms. In Argentina, President Mauricio Macri’s political capital has allowed him to pass several notable reforms. Most recently, he signed a landmark fiscal agreement with regional governors on 16 November, which should help correct the country’s macroeconomic imbalances.

This month, the LatinFocus Consensus Forecast for the region is unchanged and analysts see regional GDP growing 2.4% in 2018. A recovery of confidence in the region is expected to fuel healthy private consumption and investment next year, while exports of commodities are seen benefiting from higher global prices. In 2019, growth is seen rising modestly to 2.7%.

6 of the 11 economies included in this report saw unchanged prospects this month, including Argentina, Colombia and Peru. However, growth prospects were upgraded for Brazil, after a better-than-expected Q3 GDP reading, Ecuador and Paraguay. Mexico and Venezuela were the only countries to see downgrades.

Peru and Paraguay are expected to be the region’s fastest-growing economies next year, with projected growth rates of 3.9%, followed closely by Bolivia. At the other end of the spectrum, Venezuela is seen contracting 5.0% and Ecuador is seen growing a modest 1.4%.

A pick-up in household consumption and an improvement in investment kicked the economic recovery into a higher gear in Q3. Low interest rates, recovering business sentiment and stronger dynamics in the labor market are buttressing activity. Leading data for Q4, moreover, continues to point towards a steadily improving economy. The manufacturing PMI hit a multi-year high in November, and both consumer and business confidence rose in the same month. While the economy is finally growing after the worst recession in its modern history, many challenges lie ahead, and severe macroeconomic imbalances need to be addressed. The government is embroiled in a last-ditch effort to pass a watered-down version of the pension reform bill before the end of the year—a measure that was first presented almost a year ago. The bill needs a three-fifths supermajority to pass parliament, and it is uncertain if President Michel Temer has the support needed; the window for economic reforms in the country is quickly closing ahead of the October 2018 elections.

Low interest rates, improving confidence and historically-low inflation should fuel an acceleration in growth next year. Structural reforms, however, are key to a sustainable recovery and the reversal of the untenable level of public debt. FocusEconomics analysts see the economy growing 2.4% in 2018, which is up 0.1 percentage points from last month’s forecast. In 2019, growth is seen edging up to 2.5%.

A second release showed that economic growth was slightly weaker than originally reported in Q3, with activity severely dampened by earthquake- and hurricane-related disruptions and weaker private spending growth. Households are increasingly feeling the pressure of multi-year high inflation and decelerating credit lending growth, with retail sales contracting for a second consecutive month in September. Incoming data for Q4 remains mixed: Manufacturing exports regained traction in October following September’s trough, but inflation was higher than expected in the first half of November and fueled concerns about unchecked price pressures. On the political front, Jose Antonio Meade resigned as Finance Minister in late November to become the 2018 presidential candidate for ruling party PRI. Meanwhile, the fifth round of NAFTA negotiations that concluded on 21 November failed to yield any significant progress on contentious issues. The sixth round is slated to begin on 11 December in Washington.

A clouded political outlook ahead of next year’s presidential elections and lingering uncertainty surrounding NAFTA negotiations will continue to keep a lid on economic growth. That said, growth is expected to accelerate in 2018 due to a rebound in capital expenditure and a more supportive fiscal stance. The FocusEconomics Consensus Forecast for 2018 was downgraded 0.1 percentage points this month to 2.2%, and analysts expect GDP to increase 2.4% in 2019.

President Mauricio Macri’s government scored an important political victory when it signed a landmark fiscal agreement with regional governors on 16 November. The deal aims to reduce Argentina’s significant fiscal deficit by limiting public spending and eliminating distortive taxes that undermine the competitiveness of goods and services in overseas markets. It attests to Macri’s increased political capital following a mid-term electoral victory on 22 October. The signing of the deal came as recent indicators point to stronger growth. The three-month average of monthly economic activity reached 4.3% year-on-year in Q3, suggesting that GDP growth accelerated notably in the quarter on the back of solid domestic demand. Strong domestic demand, however, has resulted in a widening current account deficit. This, coupled with elevated fiscal spending and a slower-than-expected drop in inflation, is putting pressure on the peso and could undermine government efforts to rein in inflation and fiscal spending.

The country is set to grow at a robust pace in the next two years on higher private consumption and fixed investment, the latter of which will be supported by improving business confidence. FocusEconomics panelists see the economy expanding 3.1% in 2018, which is unchanged from last month’s forecast. For 2019, growth is expected to reach 3.2%.

Growth picked up in Q3, to 2.0% year-on-year from a disappointing 1.2% in Q2. A sustained rise in government spending, along with a recovery in the external sector, powered the upswing. Exports rebounded on greater overseas sales of oil and agricultural commodities. Improved weather conditions yielded an upturn in agricultural output, while the oil sector cashed in on the rally in oil prices. Q3’s performance undershot market analysts’ expectations, however. The economy remains in a weak spot following the collapse of oil prices in 2014–2016, which hurled growth to the lowest levels in eight years. Recent data indicates that momentum will likely be subdued in Q4: Annual growth in exports moderated in October from September, and consumer confidence deteriorated further, signaling that private consumption will remain weak. Following the Q3 release, the government cut its full-year growth forecast for the year from 2.0% to 1.8%.

The economy is expected to accelerate next year on the back of higher private consumption, an upturn in investment, and a strong surge in oil and commodity exports. On 22 November, Colombia’s state-run oil company, Ecopetrol, announced production and exploration investment plans worth USD 3.5–4.0 billion for 2018, and a target to yield 715,000–725,000 barrels per day next year. FocusEconomics panelists expect GDP to grow 2.6% in 2018, which is unchanged from last month’s forecast, and 3.1% in 2019.

A comprehensive estimate for inflation in October revealed that price pressures were unchanged in Latin America, without considering the current period of hyperinflation in Venezuela. The FocusEconomics regional estimate showed that inflation in Latin America (excluding Venezuela) was 5.7%, matching September’s revised result. Inflation has fallen notably in 2017, in part thanks to better exchange rate dynamics. However, despite the moderation in price pressures, rising U.S. interest rates are eroding space for monetary policy easing. In November, the central banks of Chile and Mexico held interest rates unchanged, while policymakers in Argentina hiked rates. Peru’s Central Bank, in contrast, cut rates.