Demographics of Latin America mean the population is not replacing itself 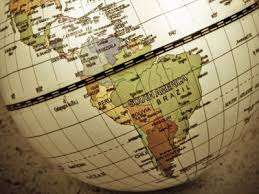 Gateway to South America on 11/02/2014 - 18:24 in All categories of countries are, Argentina-General, Brasil-general en, Chile – General, General of Uruguay, Perú-general en

Demographics of Latin America mean the population is not replacing itself 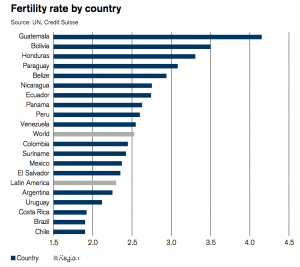 Latin America economies generally have favorable demographics relative to global standards. The fertility rate has been on a declining trend over the last few decades, and has now fallen below the world average, but still stands well above the rate of developed economies and the replacement rate of 2.1. There are large variations within the region.

Brazil, the most populous country, and wealthy countries such as Chile, Uruguay and Argentina, have fertility rates below the replacement rate Mexico on the other hand has a fertility rate above the regional weighted average, but still trails the global fertility rate. The remaining smaller economies in the region have generally higher fertility rates.

Despite declining fertility rates, several economies enjoy relatively low dependency rates (i.e. population outside the working age relative to total population). In addition, life expectancy has improved substantially over the years, from approximately 51 years in 1950 to 73 years in 2010 . The vast majority of countries have life expectancy rates above the world average, while Chile and Costa Rica exceed the developed market average of 76.9 years. Countries  with high fertility rates are expected to show stronger growth in basic staples consumption. In contrast, countries with low fertility rates and higher dependency rates will see healthcare expenditure grow at a faster relative rate.

Our global demographics scorecard combines three key demographics variables: fertility rates, life expectancy at birth and old-age dependency. Demographic conditions in Latin America are in line with other emerging economies but much better than high-income economies. It is worth mentioning that demographic indicators in Brazil have dropped over the last few years, so the country has one of the lowest scores in the region.

Source from a report by Credit Suisse