Gateway to South America on 19/05/2018 - 09:06 in All categories of countries are, Argentina-General, Argentine farms

The winding dirt road that goes down to this southeast part of the province of Salta in Northern Argentina, is for many hours drive one of native grasses and rugged bush degraded by overgrazing.

Suddenly, like an oasis, there appears an open field with corn and soybean under ground drip irrigation, reaching yields similar to those of the rich Pampas closer to Buenos Aires. Bradford cattle are seen to be fattened on high-quality pasture in organised areas. 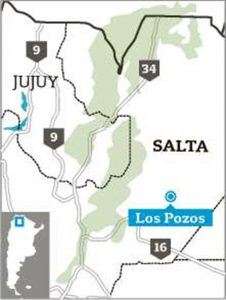 You will have arrived at Los Pozos, a farm owned by Cresud, which develops properties in the area. Cresud was originally associated with the financer Soros.

The company has 240,000 hectares of its own and is located in the department of Rivadavia, southeast in the province of Salta. It is near the town of Joaquín V. González, in the department of Anta, and the border with the Chaco, 350 kilometres from the capital city. It was acquired by Cresud in 1995.

The climate of the area is subtropical with dry (autumn-winter) and wet season (spring-summer), with rainfall ranging from 600 to 700 mm by years, averaging 628 last. The average annual temperature is around 20 degrees and eight at annual average frost may occur from May to September. The original biomass was forest and mountain.

In the fields, soil heterogeneity is observed, with a predominance of class III and IV on the seventh and eighth. They are well supplied with phosphorus (frequent values are 60 ppm) and nitrogen (35 to 70 ppm).

The soil maps identify if a pasture is agriculture or livestock and determines the type of work to be done, its agricultural suitability. The priority is to improve water retention through direct seeding and increased organic matter. The crops are sown early, such as corn, in order to prevent soil erosion. In the cattle lots, pastures megatérmicas Gatton panic and Rhodes grass are grown.

Of the 240,000 hectares of Los Pozos, 42,000 are for full-cycle livestock. “The livestock system of Los Pozos has as its main forage Gatton panic grasses and silage. With this diet, they have developed a complete cycle that produces steers for export,

Naturally servicing of cows take place from January to March and calving is in October, November and December. In turn, the servicing of heifers is around 20 months (340-360 kilos) in July, August and September, with fixed time artificial insemination by bulls later. Calving occurs in April, May and June, October and November weaning. Stocking numbers varies per field sectors, but fluctuates around a cow per hectare.

Recría system is innovative for the area of NOA. Weaning is performed with 160-180 kilos. In a first stage the “head” and “body” (approximately 70% of calves and calves) by enclosing a pens with silage consumption and cottonseed protein for feed. This mode takes place during the dry winter season.

The remaining 30% (the “tail” weaning) also is enclosing in pens, but have more concentrated diets based on silo sorghum and cottonseed but adding soybeans, cracked corn and vitamin-minerals. With these rations, calves from the  “tail” gain more weight and are equated with “head” and “body” to the end of the enclosing. Fattening is about 400 grams per day during Silage consumption in the winter period and 600 grams per day in a shepherd stage. In the summer, with the onset of rains and the consequent abundant grass production quality, those animals with 270-280 kg are sent out into the fields.
There is a rotational grazing system in place, in order to maximize the high growth rate and meat conversion in addition to achieving controlled grass renovation. From April they begin to send the first steers, the finishing stage, weighing 360-380 kilos back to the pens. Steers are finished in enclosed feeding pens because this phase is carried out in a dry time of low production and turf quality. Animals that are sent to slaughter have on average 24 months of age, weighing 460 to 490 kilos and intended for export.

The soils of higher quality produce Pozos corn and soybean crops in rotation. The cereal production system includes long fallows periods to spell the dry season and accumulate moisture for planting. Hybrid seeds are used with a good balance between productivity and stability, using direct pneumatic machines contractors, achieve densities of the order of 44,000 plants per hectare and selective weed control spraying for planting. There is no need to fertilize because new soils are well supplied with phosphorus and nitrogen.A proportion of acreage is intended to making silage to be used by livestock.

Lately using underground drip irrigation, they have achieved yields of 10,000 kilos of corn per hectare in 189 hectares using higher rates of seed and fertilizer.

The system consists of pipes that run throughout the pasture with a spacing of 90 cm each and every 50 centimeters diffusers. They are buried 20 centimetres so as not hinder the work of crop establishment. The system allows fertigation and ensures high efficiency of water use, by not generating losses due to evaporation or runoff. Each diffuser can distribute a flow rate of one litre per hour.

Soybeans planted from December 15 with a density of about 270,000 plants per hectare, are well protected during the growing season with insecticides and fungicides. For now, the area is free of the dreaded black weevil, which will achieve yields of around 28 quintals / ha this season,  Of the total production, 2000 tons are used in the feedlot company, which also requires 15,000 tons of corn.

Cresud, the owner of Los Pozos, is an agricultural company that buys and develops land to add value and then sell them. The process involves the transformation of unproductive livestock or agricultural surfaces based on the suitability of soils and commercial possibilities.

In Argentina, Cresud works 550,000 hectares in 13 farms with crops and livestock. If the enterprises in Brazil, Paraguay and Bolivia were added, it would total  840,000 hectares. It is listed on the Stock Exchange of Buenos Aires and the US Nasdaq.

Of the 240,000 hectares of Los Pozos, 42,000 ha are destined for livestock, agriculture 18,000 ah, 10,800 ha are in development and the rest maintains in its natural condition. The field is divided into modules, which in turn include batches that are gradually developed.

Summer rains in the area of demand precision and speed of implementation. In the field they have organized “planting ” of 1500-1700 ha per day with contractors, to take advantage of downpours during December and January.

In Los Pozos 98 people, who live on site with their families working on the farm. The owners have built a school and a medical clinic for them.

It is a win win development for the owners and the region.