Christoph Jakob Ehrbar: “We must aim more at the quality of the wine than to the quantity” 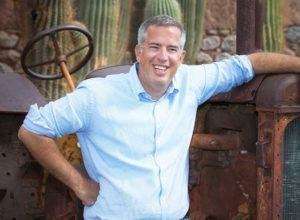 In 2001, Donald Hess decided to found Argentina’s oldest winery. He, a Swiss known worldwide for being a successful wine entrepreneur, already having vineyards in the United States, Australia and South Africa, but wanted to settle in South America. He went to Chile, but he found it too similar to Switzerland and without a story to tell, something he did discover on this other side of the mountain range. After discarding Mendoza, he fell in love with the Valles calchaquíes, in Salta, and changed his face to Colomé, which had been created in 1831. Preceded by this story, Christoph Jakob Ehrbar, president and CEO of the Hess Group AG, Liebefeld-Bern, says: “We must aim more at the quality of wine than mass production.”

This Swiss executive, appointed by Hess himself to carry out the reins of his operation in this part of the world, says that with the current government is more supported than the previous and that’s why his group decided to return to invest in the country, with a disbursement of $30 million this year and the launch of a new wine. “It will be called my Colomé 1831 and it will be made with the grapes from the oldest vineyards,” he says.

-There is a worldwide phenomenon that is that people consume local wines. It is a new and very good feeling because it indicates that it is difficult to find a bad wine and that the industry is very professionalized. It goes towards a consumption of less quantity but higher quality in wines. The range to be handled is about US $25 per bottle; People are willing to pay a little more for what they take. In addition, the millennial generation has passion, is willing to pay a little more and is interested in what their production is. That’s why you don’t have to do artificial things.

-How is Argentinian wine today positioned in the world?

-Argentine culture, in general, is well-seen in the world. In European countries, like Switzerland, for example, it is not going to cost to sell an Argentinian wine, because it is very well seen and generates some resemblance to Spain or Portugal, which are close. There, they would not buy a Chilean wine, which is as far as Argentina but does not have this effective image that the Argentinians do. Here the wine producers are very well educated and understood that the idea is freshness, especially considering that this market was not overexploited, such as Chile and Australia. It is clear that today we must aim more at the quality of wine than to produce in mass.

-It comes from a very long inflationary process, which caused the country to cease to be competitive in certain price segments, such as US $24. That led to little volume, but higher quality. Still, it continues to grow, with exports of more than 20 million boxes (US $750 million; three years ago it was US $580 million). Today, few wineries can be profitable by exporting segments below $30.

-Beyond that, what advantages and disadvantages do you see here?

-In disadvantages, administrative restrictions, import restrictions and inflation. In particular, it is difficult for Colomé to be in Salta and have to transport the wine over very large distances. As for advantages, I see a good structure to export, with a well-seen product worldwide.

-What are the differences between the current government and the previous one?

-As an active investor in the business world, I feel more supported now and I see that investments are more facilitated. The government is trying to help people invest here and create new jobs. So as a group we decided to go back to investing in the country.

-How much have you invested and how much will you invest from now on?

-En 2018, $30 million. It is investing in a recreation centre in Cafayate, which gives a new way to experience our wines Amalaya. We also invest in an optical cluster selection machine, in the reopening of the stay and in divulging our brand. We have a history of 20 years of investment in the country.

-How do you see the competition with beer here and in the world?

-It’s a global trend, but I think all the great breweries are suffering in turn by the emerging artisan breweries. Anyway, at some point, there’s going to be a debugging of this large number of beer manufacturers. In addition, there is another trend that removes consumers from wine, such as the rise of the spirits. Now, that said all this, I think that wine consumption is also growing.

-How is your business dealt with?

-40% of the production is destined to the domestic market (which in value represents 32%), the remainder is exported 30% to Europe and 30% to the United States. What we are looking for is to leave a footprint in the local market, because ours are wines destined to restaurants and small wine. In Europe there is a lot of competition, so we aim at specific markets, such as England, Switzerland, Germany and France.

-What is the volume of production of their wineries [in addition to Colomé have Amalaya]?

-Colomé, which is in mills, produces per year 600,000 bottles and Amalaya, which is in Cafayate, 1.4 million. When Hess buys Colomé he finds that one of the brands was Amalaya. As that brand began to grow a lot, decided to make it independent and locate it in another place, which is even closer to Salta capital. With all that, the total turnover of the group, which employs 140 employees in the country, is $300 million.

-Should Argentina continue to bet on Malbec as a flagship or does it have to export other varietals?

-We must continue investing in Malbec, because, while I have hope in other varieties, such as Torrontés, outside Malbec is the one that resonates most in buyers. In addition, we enter a stage where we have to start talking about regions and show how Malbec is expressed differently in each wine-growing area. For example, Salta is still the best place in the country to invest in wines, because the heights it has are unique.

-The group invests in real estate in other countries. Is there any chance they’ll do it here, too?

-Yes, we are interested in investing in real estate in Argentina. But here the prices are quite high, so we have to be careful and see what we invest.

-Are they still producing biodynamic wines in Colomé?

-We had problems with the ants that ate the vineyards. We had to give up the certification that we had and started to put poison to fight the ants (clarified that the vineyard is not pulverized). Beyond that, we continue with biodynamic practices. We would have to get a certification again, but this time in organic, because people are willing to pay a little more for products that do not include chemicals in their production.