Gateway to South America on 10/03/2014 - 14:23 in All categories of countries are, Argentina-General, Argentine farms, Commercial Argentina 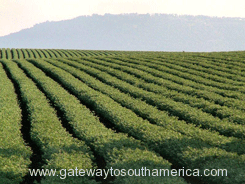 China’s move to buy a controlling stake in Netherlands-based agricultural trading company Nidera has divided the waters among farmers in Argentina, one of the world’s leading soy exporters, with larger producers celebrating the purchase and smaller ones raising concerns about potential market concentration.

State-run China Grains and Oils Group Corporation (COFCO) announced on February 28 that it had bought a 51 percent stake in Rotterdam-based Nidera — whose largest branch is located in Argentina —reportedly for US$1.2 billion, in a drive to become a global agribusiness player.

“‘The Chinese investing capital to buy a stake in a major company is positive for all Argentine farmers, including the smaller ones. It adds a new major player at the time that will give farmer a greater access to China’s market,” he said making clear that he was talking exclusively on his own behalf and not as a director of the SRA.

“It is good that the Chinese participate in the market,” said Alfredo Rodes, director executive of the CARBAP lobby that groups producers from Buenos Aires and La Pampa provinces, a lobby that is a leading member of CRA.

“COFCO has an extraordinary port logistics and now is buying commodities directly. There will be a great synergy and it will be a leading player,” he told the Herald.

Jorge Castro, a Planning secretary under the neoconservative tenure of Peronist President Carlos Menem (1989-1999), said that COFCO’s is a purchase of “enormous strategic importance as Nidera has a presence in over 80 countries. It is part of a drive by China to increase the global agricultural and food offer to favour exports to its mammoth market.”

As part of that strategy Chinese food producer Shuanghui International bought the US’s largest pork producer, Smithfield Foods, Inc., for US$7 billion, including US$4 billion in cash, in the largest Chinese investment in a US firm.

“They are turning soybeans into pork meat,” Castro said. “For Argentina this has an enormous importance.”

“Nidera is based in Rotterdam, which is the entrance for agriculturual and food commodities in the European Union.”

Asked why he thought Nidera had sold control, Castro said: “COFCO made them an offer they could not refuse.”

Officials from FAA and Coninagro have voiced some concerns.

“COFCO’s arrival alter is coming alter the trading channel and the know-how, not the land. On the one hand its move will be positive for Argentine farmers because it will mean an increasing demand. However, on the other hand it could mean a higher concentration and in some years’ time they could start to set the rules of the game,” an FAA source who talked on condition of anonymity told the Herald.

“The small farmer is already at a disadvantage in the face of the six large companies that dominate the market, imagine what could happen if those companies have also the backing of the capitals from China, the world largest debt holder, with all that that means in terms of pressure capacity,” the official added.

The risk may be not immediate because they are interested in getting the know-how and, as a consequence they will let Nidera to continue to work as a private company, but in a few years they could start influencing on prices, the source said, adding that the FAA was still considering whether to issue an official statement on that “thorny issue.”

He also said that COFCO was interested in the trading channel rather than purchasing land in Argentina. “Why would they want to buy, say, 400,000 hectares with all it involves in terms of production, logistics, manpower, etc, when controlling the commercial channel they know that sooner or later the producer has to sell his production through them?”

Coninagro Chairman Carlos Garetto said: “China will not come through the diplomatic way. We’d better prepare ourselves to produce more and feed the starving world.”

Argentina has the capacity to feed 300 million people but Garetto said that “with favourable policies the nation could increase its capacity by 60 percent by 2020.”

“We either start feeding the world or the world will seat at our table without asking permission,” he said.

Garetto is one the members of the liaison board of the four leading farm lobbies that have been challenging the government on export duties since 2008, including an epic one-month long strike that year.

Fernández de Kirchner has accused farmers in general of greedily keeping for them windfall profits on the back of a strong food demand from China and India, and she has also singled out the SRA accusing it of seeking to destabilize her administration.

Garetto said that the nation was not producing more as a consequence of the government’s policies on a wide range of fields, including the tax, commercial, financial, monetary, exchange and infrastructure areas.

Rodes, from Carbap, recalled that soy has a general export levy of 35 percent and that combining all levies Argentine farmers have a tax weight of well over 85 percent