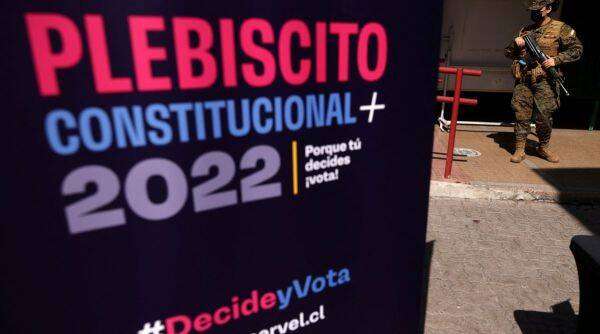 The proposed draft aims to replace the current constitution, first written during the Augusto Pinochet dictatorship (1973-1990), but despite several successive reforms – is still considered an obstacle to what the left sees as necessary social changes.

Education, health care and pensions are still in the hands of the private sector.

But despite an overwhelming majority of Chileans – close to four-fifths – voting previously to rewrite the constitution, opinion polls suggest the new document will be rejected.

Chief among voters’ concerns, though, is the prominence given to the country’s Indigenous peoples, who constitute up to 13 per cent of the 19 million population.

Proposals to legalise abortion and protect the environment and natural resources such as water, which are currently often seen as overexploited by private mining companies, have also garnered much attention.

For many people, the thought of a new constitution that aims to nationalise certain key sectors has sparked fears of a move to Venezuelan-type politics.

“I don’t want to be another Venezuela; we have a lot to lose,” Patricio Gutiérrez, 40, an engineer for a transnational mining company, told AFP.

Like many others, he fears the new constitution would generate instability and uncertainty, harming the economy.

“Social reforms are necessary but not changing the rules in a country that is doing well,” added Gutiérrez.

Yet around 40 world-renowned left-leaning economists and political scientists have expressed their support for the new project.

Those favouring the new constitution say it will prompt major changes in a conservative country marked by social and ethnic tensions and lay the foundation for a more egalitarian country.

Anadriel Hernandez, 18, a first-time voter, expects the new constitution “will change Chile, maybe not overnight, because that would be impossible, but you always have to start somewhere.”

One of the main drivers for the new constitution was the outbreak of massive social unrest in 2019, initially in response to a metro fare hike. But it mushroomed into demands for greater social justice in a country that enjoyed years of economic strength but widening inequality.

Many people blamed the constitution, which gave importance of private enterprise over crucial industries, creating a fertile breeding ground for the middle class to prosper but the very poor to struggle.

Although the constitution has undergone several reforms since it was implemented in 1980, it retains the stigma of being introduced during an anti-communist dictatorship.

But Luz Galarce, 53, who teaches young children, said she would vote no because the idea to rewrite the constitution “came from a moment of great crisis in our country, it wasn’t a decision taken objectively.”

Some 15 million people will go to the ballot box in a compulsory vote.

Having already voted to rewrite the constitution and then elect the representatives to do so, this will be the third time in two years Chileans have headed to the polls over this issue.

The new text was drawn up by a constitutional commission made up of 154 members – mostly without political affiliation – split equally between men and women and with 17 places reserved for Indigenous people.

The resulting proposal recognizes 11 Indigenous peoples and offers them greater autonomy, particularly in terms of justice.

It is the most controversial clause, with some critics accusing the authors of trying to turn the traditionally marginalised Indigenous people into upper-class citizens.

“Most likely, the reject vote will win, and for that to change depends on the number of people who vote and who votes,” political scientist Marcelo Mella told AFP.

If accepted, Chile’s congress will decide how to apply the new laws. If the new text is rejected, the current constitution will remain in place.

Note: many Chileans have looked in horror at what has happened in New Zealand and Fiji, both small countries where minority ethnic groups have effectively taken over the institutions and political power. In New Zealand’s case, because there is not a clear definition of a person’s race by DNA testing, we have seen a power grab by those who, by any reasonable definition of heritage, would be seen as European, not indigenous for land, sea, air and other major resources.