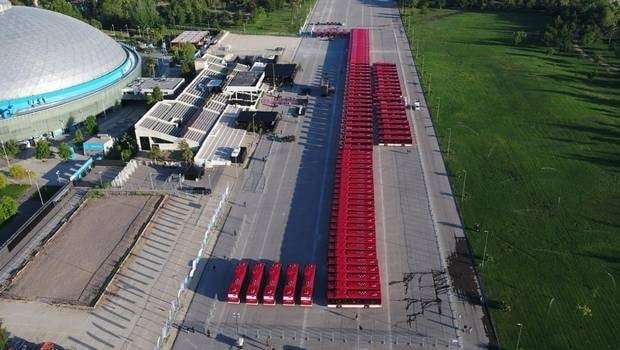 Chile adds another 100 electric buses to its fleet

The Minister of Transport and Telecommunications, Gloria Hutt, together with the Undersecretary of Transport, Jose Luis Domínguez, and the DTPM director, Fernando Saka, were in charge of receiving the vehicles that, thanks to a public-private collaboration with the companies Gildemeister, , STP and , will allow improving the quality of service in Chilean capital.

Starting in March, vehicles will begin to operate services that connect Maipú and Bajos de Mena with the city center, which will raise the standard of travel comfort for thousands of users in remote communes.

The buses made by Chinese vehicle maker Yutong will serve alongside the first batch of 100 buses already in circulation.

“Talking about electric public transportation sounded futuristic a few years ago, but today it is a reality that circulates in our streets every day,” Hutt told reporters gathered for the presentation.

The new units rank Chile in first place as the Latin American country with the biggest electric public transit fleet, and in second place globally.

The air-conditioned buses are 100 percent electric and have other modern features, including on-board Wi-Fi connection and seats equipped with USB ports for charging mobiles and other hand-held devices.

They are quiet to operate, helping combat noise pollution, and cut operating costs by nearly 80 percent compared to the current diesel-powered buses serving the capital, the minister said.

Able to reach speeds of up to 85 km per hour and run for up to 300 km on a single charge, the buses are set to serve commuters shuttling between the country’s two most heavily populated urban districts, Maipu and Puente Alto, surrounding the capital.

“We are fully in the process of technological updating. Just as we have gasoline stations, we will also now have the latest electric charging stations, which will place us at the cutting edge of this field,” said Luis Barahona, general manager of STP Santiago, one of the companies which are to operate the buses.

During the ceremony, Yutong’s vice president, Kent Chang, presented Hutt with a traditional Chinese decorative tassel, a symbol of friendship and good fortune.

The vehicles were shipped from Yutong’s plant in Zhengzhou in central China, and spent nearly two months in transit.

According to Hutt, the buses have been “well received” and have been “operating well.”

Incorporating the electric buses is part of “Third Millennium Transport,” an ambitious program to upgrade public transit in the capital and other major cities and promote sustainability in Chile.