Chile to change the most radical of Pinochet economic legacies 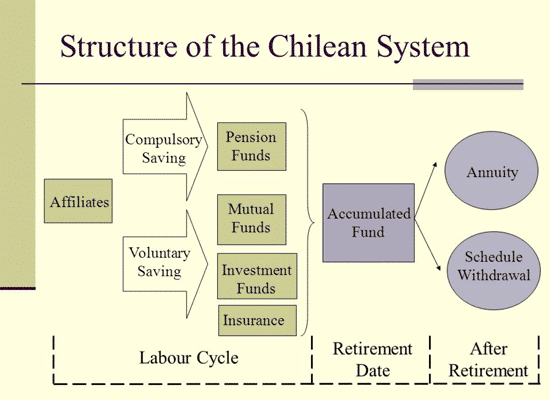 One of Pinochet economic legacies is about to be changed. Chile’s President Michelle Bachelet proposed changes to the most radical of all the economic reforms of former dictator Augusto Pinochet — the private pension system that inspired a wave of similar projects worldwide. For the first time, companies will have to contribute to the system, which until now depended on payments by workers to private savings accounts, Bachelet said in a televised address to the nation late Tuesday, August 9.

The proposals come after more than 100,000 marched through Santiago last month to demand change. Their anger is easy to understand. While the system introduced in 1981 boosted the national savings rate, underpinned the expansion of capital markets and fuelled more than 30 years of economic growth, it failed in one vital aspect — it pays lousy pensions. Chileans receive an average pension equivalent to 38 percent of their final income, the lowest rate among the 35 nations of the Organization of Economic Cooperation and Development after Mexico. The founders of the system had indicated that it would be closer to 70 percent. “We need to build a solidarity system that doesn’t leave all responsibilities to the individual and that abandons them when they’re left behind,” Bachelet said.

Panacea The proposals mark a change in attitude to a system that was regarded by many economists as a panacea in the 1990’s as aging populations threatened to bankrupt the traditional pay-as-you-go systems. The system was copied, at least in part, by countries such as Peru, Colombia and Mexico and lauded by Republican candidates in the U.S.. But it has proved a heavy burden for ordinary Chileans, who feel abandoned in their old age by a government that has more than $20 billion in sovereign wealth funds, yet contributes little to the pension system.

“The first generations that have worked under this model are starting to retire now and they are realizing that their pensions are much lower than promised,” said Claudia Sanhueza, an economist and a member of a presidential Pensions Committee that proposed changes to the system. Chicago Boys The pension system was created in the middle of Pinochet’s dictatorship, by the so-called Chicago Boys, economists many of whom were trained at the University of Chicago.

It diverted workers’ contributions into privately run funds, cutting government revenue over the next few decades in exchange for a reduction in state pension payments 30 years down the line. “The system was imposed during the dictatorship, it was seen as a simple way for the state to separate from such an important part of fiscal spending,” Sanhueza said. “Given its origins and the results, the system has no legitimacy.” 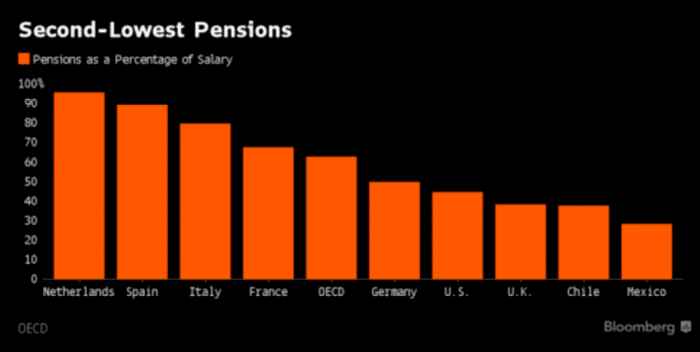 It was ushered in by a recession, fiscal spending cuts and a clamp down on all forms of dissent. While Chileans harbored their grudges against a system foisted upon them, the economy never looked back. The pension funds amassed billions of dollars in savings, reaching $176 billion last month, much of which was ploughed into local stocks and bonds, cutting financing costs and ending a decades-long dependence on foreign capital. Gross domestic product expanded an average 5.2 percent over the past 32 years. Global Inspiration As the pension funds built up and the economy expanded, 33 countries worldwide copied the system, stretching from Peru to Poland. Nine of them copied the system in its entirety, while 24 adopted parts of it. Jose Pinera, the founder of the Chilean system, was flying high, traveling the globe on a mission to save pension systems worldwide. Even Republican presidential candidate in 2011, Herman Cain, said he wanted to replace Social Security with what he called the “Chilean model” of pensions.

All this time though, popular frustration was building as tens of thousands of Chileans slipped into poverty on retirement as the system failed to meet its initial, exalted claims on how much it would pay. The problem is, Chileans don’t save enough. Whereas the creators of the system calculated that workers would make contributions for more than 30 years, a recent study by the Pension Funds Association found only one in four retirees saved money for more than 25 years.

Moreover, Chileans save less of their income for pensions than most other countries. As a result, the average pension for people who retired last year was about $400, but pensions for about 40 percent of retirees are between $160 and $260. “The amount of savings has been insufficient to ensure people’s well-being during their retirement,” Sanhueza said. Getting Worse The problem was only going to get worse. The pension funds netted an average return on assets of 12.3 percent in the 1980’s, 10.4 percent in the 1990’s, 6.3 percent in the 2000’s and just 4.3 percent since 2010.

With lower than expected contributions and falling returns, the system had to find more money from somewhere. Bachelet said that new source of funds would be employers, paying in 5 percent, on top of the 10 percent that workers already contribute. The extra payment, introduced gradually over the next 10 years, will go to a so-called solidarity pillar, rather than people’s personal savings accounts, enabling the government to increase current pensions and achieve more equality in future pensions, the president said.

The proposals will leave people’s individual savings accounts untouched and economists relieved. In 2011, the Hungarian government seized about $10 billion in pension savings and transferred them to the public system. This year, the Polish government outlined plans to dismantle the country’s privately-owned system. At least a quarter of the $35 billion of assets held within the pension system will be managed by a state entity.

In Chile, the proposals are modifications rather than an overhaul. Those who earn more will help those who earn less save for their pensions, Finance Minister Rodrigo Valdes said Wednesday, while highlighting the need for an agreement with the opposition over any changes. The reform, as currently designed, would cost the government $1.5 billion, or 0.5 percent of GDP, he said. “Too many people receive too low pensions and are left to their own luck,” Bachelet said. “Pensions are a right for everyone and they must be a shared responsibility.”

(The following article was written by Laura Millan Lombrana and was published in Bloomberg on 11 August, 2016)

Contact the Gateway to South America team to learn about the best investment opportunities in the region. The company is a benchmark for foreign investors wishing to invest in Argentina, Brazil, http://www.gtsa-chile.comChile, Paraguay, Peru and Uruguay, providing expert advice on property acquisition and investment tours.