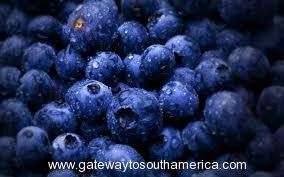 The Official Ceremony in the Chilean Embassy in China and the launch of the first promotions of this fruit in the BHG Supermarket Chain are amongst some of the actions undertaken last week. The Embassy of Chile in Beijing together with the Chilean Fruit Exporters Association (ASOEX) and the Chilean blueberries Committee organized several events to celebrate and promote the entry of Chilean blueberries into the Chinese market.

The activities included an Official Ceremony at the Chilean Embassy in China and the launch of the first promotions in this important market, undertaken in selected retail chains. The activities were attended by high representatives of the Administration of Quality Supervision Inspection and Quarantine of China, AQSIQ, led by the vice minister Wei Chuanzhong; the Chilean Ambassador in China Luis Schmidt; the Chilean Fruit Exporters Association (ASOEX) General Manager Miguel Canala-‐Echeverria, as well as important Chinese importers and distributors, and were covered by several local and international media.

“Chile is the second supplier of fresh fruit to China, only exceeded by Thailand. This encourages us to carry on with our efforts, especially since the blueberry is a source of vitamins and minerals very necessary in today’s dynamic world”, stated

The Ambassador quoted President Sebastián Piñera stating that “Chile is not the largest, richest or most powerful country, but we devote our efforts to transform it into the best country of all”.

“The government, the fruit industry and the fruit growers and exporters must congratulate themselves, as thanks to them the Chinese consumers will be able to enjoy blueberries that come from so far away”, he added.

In this respect, Miguel Canala-‐Echeverría stated: “the entry of our blueberries into the Chinese market allows us as a country to diversify the presence of Chilean fruit in this market, since the blueberries complement current exports of apples, table grapes, kiwis, plums and cherries.”

“Chile is the first country authorized to export blueberries to China and given our condition as producer and exporter of this fruit from the Southern Hemisphere, it is a natural complement of the Chinese production. This condition will permit Chinese consumers to have fresh blueberries practically during the whole year, which will thus also contribute to increase the knowledge and consumption of this fruit not only during winter time but also in summer”, said the ASOEX’s representative.

The AQSIQ Vice Minister, Wei Chuanzhong, in turn, highlighted the work of both nations in successfully concluding the entry of Chilean blueberries into China stating that between both nations there are important trading and working bonds in the area of product quality inspection. “Chile is the first South American country that built a diplomatic relationship with China as well as being the first Latin American nation that acknowledged the Chinese status as a full market economy and signed a Free Trade Agreement with China. These actions imply that China and Chile are trusted friends and mutual partners,” said Wei.

Promotional activities for the Chilean blueberries in the Chinese market were officially launched at a Beijing retail chain, where point of sale material was delivered and tastings were implemented.

“This is only the first step, since we are preparing a future promotional program to be developed jointly with our main importers and distributors in the Chinese market, including activities in specialized media, points of sale and the development of recipe ideas based on the unique characteristics of the Chilean blueberry”, added Ronald Bown, Chairman of the Board of the Chilean Fruit Exporters Association (ASOEX), who at the moment is participating in a Presidential delegation mission in Vietnam.

In 2010, Chile sent to the Chinese market a total of 137,300 tons of fruit, which represented 39.9% of the total exported fruit to the different Asian markets. Regarding blueberries, during the 2010-‐2011 season, the total exports of this fruit
reached USD380 million (FOB), equal to 69,704 tons distributed in the five continents, largely concentrated in the United States. This season, the exports of Chilean blueberries to China reach a total of 162 tons at a value of USD$770.000 (FOB), an amount that should significantly grow from next season.