Casapueblo, The Santorini of Latin America 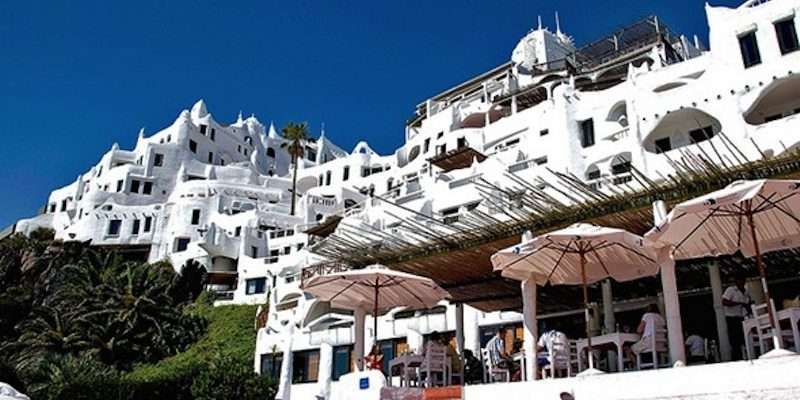 Gateway to South America on 16/05/2021 - 15:47 in All categories of countries are, General of Uruguay, Uruguay Lifestyle, Uruguay Residential

Located on a high rocky point jutting over the sparkling water of Punta Ballena, Uruguay, sits the Casapueblo, a magical sculptured hotel/museum that is often referred to as the “Greek island of Uruguay” or the “Santorini of Latin America.”

The structure’s Cycladic-inspired architecture, combined with Punta Ballena’s amazing sunset views, makes it look like a small village on the island of Santorini in Greece.

The strikingly beautiful white building, a short 15-minute drive from Punta del Este, was built by the famous Uruguayan artist Carlos Páez Vilaró. Today, it is a museum, art gallery, and hotel that welcomes thousands of visitors every year.

This complex looks like nothing else in South America. As you explore the winding cave-like corridors containing artifacts and unusual lighting, it gives you a mysterious feeling — and getting lost here is an entertaining experience

There are no room numbers on doors, since the hand-painted tiles on your key match tiles on your door tiles; and each room is unique.

The famous artist who had been so impressed by the Greek Islands’ architecture built Casapueblo (meaning House of the People) as a homage to his son Carlitos Paez, one of the sixteen survivors of the crash of Uruguayan Air Force Flight 571.Casapueblo Santorini5 of 5

Built around a tin frame called La Pionera (The Pioneer), Páez Vilaró designed the white building with a style that can be equated to the Cycladic architecture of Santorini.

Several years ago Páez Vilaró added a hotel to the house called Hotel Casapueblo, and it following the style of the original construction as well. The hotel now includes a restaurant named Las Terrazas (The Terraces).

Carlos Paez Vilaro, who died on Feb. 24, 2013 in Casapueblo, had called the structure which also housed him until his death a “living sculpture.”

He was a polymath — a self-trained painter, sculptor, screenwriter, musician and architect who championed Afro-Uruguayan Candombe music and dance, and created colorful murals in dozens of cities around the world.

His art allowed him to travel the world painting, sculpting, and making his dreams take form. Among his many creations, Casapueblo was perhaps his most important, since it was not only a sculpture but also a home, in which it was possible to live, paint, and host the friends he had made in life and his travels.

According to the chronicles written inside Casapueblo, Carlos Páez Vilaró, without being an architect, was inspired by the ovenbirds and also the people of Central and South America who rely on adobe to build their houses.

Casapueblo’s Mediterranean style was inevitable, considering its spectacular oceanfront location, with its wide white balconies looking out onto the horizon, the dawn and wheeling seabirds.

For some time, Casapueblo has welcomed various personalities from the national and international spheres; but it is mainly artists, painters and sculptors who stay there and partake of its many wonders.

The workshop and museum of Casapueblo is open year-round and is visited annually by thousands of tourists from all over the world.