Gateway to South America on 21/04/2013 - 09:42 in All categories of countries are, Argentina Lifestyle, Argentina-General, Argentine farms

After two years of military service in Marina he joined the Argentine Merchant Navy as Assistant of Mechanic, from 1967 on. Also in a foreign Merchant Navy as 3rd Technical Officer from 1969 until 1971, sailing principally on the southern seas choosing the crossing of the Strait of Magellan that is the pass between the Atlantic Ocean and the Pacific Ocean.  He therefore covered the route chosen by Charles Darwin to look for the Nomads of the sea ‘ the Alacalufes ‘.

He navigated this straights 14 times covering this way 140.000 sea miles. In the year 1972 he left the sea and began his work in the Misiones jungle in the High Parana on request of the ornithologist Andres Giai. In 1973 already established in Eldorado, province of Misions next to ‘ Cataracts of the Iguazu he started the ‘ Yaguarete safaris ‘ company dedicated to hunting tours. 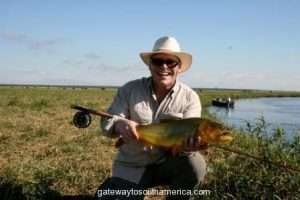 During that year he studied the life and habits of the so called Saw-bill duck (of the Mergus family) considered extinct. In 1974 he was hired by an American film company as a guide in the production of the movie on birds and animals of the Misiones forest “There was once in the North” A project that was left unfinished by the inopportune death of the ornithologist earlier mentioned.

In the year 1975 he was called by the Direction of Fauna and Flora of the province of Misiones to represent the province in the first congress of Fauna to be held for the construction of the famous dam of Yacyretá Apipe and the potential consequences on the migrations and alterations in the habits of the Golden Dorado (Salminus-maxillosus).

At the end of this year he realized along with Hugo Pesce, the renown white hunter of Paraguay, a long canoe journey on the river Uruguay from its birth, down to below the Moconá falls, studying the different species of birds that inhabit the zone, in spite of having scarce material. The following year he canoed alone from Port Iguazu to Inns covering approximately 370 kms.

During the same period he realized different reports on the fauna of the lagoons of De Luna and Galarza. These are the largest lagoons inside the 13.000 squares kilometers that compose the wetlands of the Ibera in the province of Corrientes. Also at the time he realized several reports of the area of the Moconá falls for a European company looking to build a hotel in the area.

At the beginning of 1978 he settled down some 8 kilometers to the north of the city of Goya, on the Saint Lucia river in the province of Corrientes and reforms Yaguareté Safaris. The main reason for this move was the construction of the big dam of Itaipú up-stream from the border of Argentina, Brazil and Paraguay on the river Parana and then the construction of another big dam, Yacyreta, also on the river Parana 450 kilometers downstream from the one mentioned previously. This harmed the migration habits of the Dorado causing it to disappear from the waters of most of Misiones.

Due to this, he installed himself in the area of Goya, 450 kilometers downstream from the dam where the Golden Dorado still survives. Here he guided fishing trips all along the Parana river and its tributaries as well as the Corrientes river inside the Iberá Wetland reserve studying the possibility of settling in this inhospitable zone, the home of the native Indians and thousands of different birds, big caimans and families of amphibians as the carpincho or capybara, and huge shoals of Golden Dorado.

In the year 1982 he volunteered as a soldier in the Argentine Armed forces to defend his homeland during to the conflict of the South Atlantic Ocean with Great Britain.

The same year he traveled to the Amazons to realize bird and flora observations in the area. Also in the year 1982, along with the naturalist Alvaro Casals, he spent 12 days in creeks of the Iberia Lagoon looking for birds in extinction. In the following years he continued as a fly-fishing guide, alternating summers with trout fishing on the rivers of The Patagonia and Golden Dorado fishing.

In 1995 he acquired a plot of land so as to realize one of his dreams: to have his own place on the Corrientes river inside the Reservation of the Iberá. He called it Capitá Miní where he built a 400 square meter log lodge with a glass front facing the immense estuary of the Iberá. It has a 60 square meter dining room and 4 big double rooms with air conditioning for fishermen. He constructed a 2300 meter long channel, 6 m wide and 4 m deep to gain access to the river with the boats.

The promotion of the Golden Dorado was greatly sponsored by Mario for the Secretary of Tourism of the Nation, representing Argentina in more than 10 Fly-fishing Expo-shows in different cities in the United States of North America plus four trips to Europe with the same purpose. Today the Golden Dorado has almost as many followers as trout.

During the Winter when the fishing season is over he gives hunting tours for ducks and partridges on his own and rented land.

He also takes hunters to The Pampas to hunt for pumas, boar and red deer.

In 2000 he began receiving fishermen from the Far East, especially Japan being the pioneer in this marke

Due to the climatic changes that the planet has endured during the last decades, especially the droughts in the North of Argentina, there has been a noticable lack of water in the Iberá Wetlands and as the estuaries run into the Corrientes river, this low level of water has made it often impossible to sail the river, while the drop in the shoals of Dorado have reduced the fishing. Due to this, Mario has now another option independent from the previous one. He acquired a new property and constructed a second lodge: “Dorado Cua” 450 square meters, similar to the lodges of Montana in the USA on the beautiful river Isoró with its big islands, vegetations, birds and very important clear waters the whole year round. This new development is 250 kilometers from Capitá Miní and has something very important: the fishermen go out of the lodge walking rod in hand only 50 meters, they embark and are fishing in less than five minutes and hooking their first Dorados.

In winter he receives duck hunters who in 15 minutes of navigation are in the middle of the islands of the area where the ducks are.

As the rains have normalized in the North Argentina and the Corrientes river also resumed its normal level, the Dorado have returned.  The new season begins on the 1st of September and both lodges, Dorado Cuá and Capitá Miní, will be operating simultaneously.