Can Argentines save Argentina ? 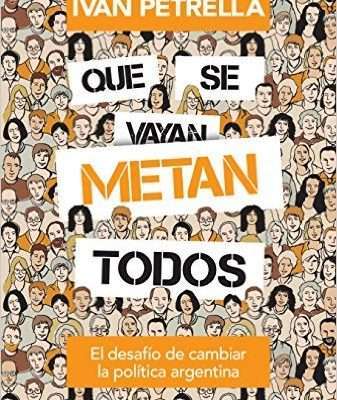 Can Argentines save Argentina ?

Just a few years ago, forty-something Argentines academic Ivan Petrella was the envy of many of his countrymen. Living in Miami Florida with degrees from Georgetown and Harvard on his resume, he was a respected philosophy and theology author, getting by comfortably thanks to his associate professorship at the University of Miami. At his leisure, he could visit a US mall to buy everyday products not sold in Argentina, take a weekend trip to Disney World without asking the Argentine government’s permission to withdrawal money from his own bank account, or order anything he pleased to his doorstep from Amazon.com. Then he did the unthinkable: he returned his native Argentina to get involved in politics, founded a think-tank, and started an uphill fight for a better future for his nation.

Is Petrella a modern day Don Quixote, fearlessly crusading for progress, political reform and societal change while the masses sit back and laugh? In his Spanish-language book Que Se Metan Todos: The Challenge to Change Argentine Politics published in March of 2015, Petrella puts forth an argument that suggests change is possible, because other countries like Finland, Ecuador, Colombia and England faced similar (or greater) challenges and found ways to persevere.

After providing some personal background on his life as the son of Argentine diplomats whose jobs took the family on stints to Rome, New York City, and Washington, DC, Petrella explores four of Argentina’s greatest challenges, followed by related case studies from around the globe. Finally, he proposes specific political and cultural solutions for all Argentines. The crux of his argument is that Argentines must take back their country through citizen involvement, not just during election years but also through a fundamental change in participation across the entire political spectrum.

Through his pragmatic but optimistic approach, Petrella’s engaging style is sure to be fascinating to anyone who has witnessed the chaos, corruption and frustration of modern day Argentina.

A day at the stadium with a side of pepper spray

The brave thinker’s first task is violence in Argentine fútbol. He explores the surprisingly close connections between the nation’s most popular teams, their hooligan fan groups called barra bravas, and Argentine politicians at all levels. Next comes a summary of ugly racial incidents, corruption, and even deaths connected to the game- all published before the most recent scandal during a River-Boca Superclassico. He reviews laws and regulations that have been put in place over the years to combat future incidents and change the culture, measures that go largely unenforced. Finally, he describes the disturbing difference between his childhood memories of attending games compared to recent visit as an adult. Petrella barely finds any of the intended spirit or fun while attending a River game, clearly affected by the crumbling stadium, the filthy surroundings where fans urinate on walls and walk on broken bottles, all while happily chanting xenophobic slurs at the opponents and their fans across the barbed wire.

He declares that Argentine’s national sport is “a mirror in whose reflection we see how we take care of our common space of democracy. This is the space we transit through every day: you, your kids, your parents, me…. Is this how we want to live? My answer is no.”

Where the police can’t go

Petrella’s next stop is a fascinating but disturbing visit to one of Buenos Aires’ famous lawless villas, which are illegal slums ruled by brutal drug lords. Around Buenos Aires, more than a quarter of a million people make ends meet in villas, and Petrella wants to see what life is like there. In a darkly humorous exchange, his cabbie almost refuses to even drive him there, and the Catholic missionaries who work within must get permission from the ruling drug traffickers’ lookouts to allow Petrella’s safe passage. The author accompanies priests during their daily efforts to reach out to the neighborhood’s disadvantaged youths, all victims of discrimination, violence, and lack of education simply because of where they were born.

Petrella witnesses the heartbreaking work of the priests, who embody the words and deeds of Argentine-born Pope Francis: eschewing the comfort of cathedrals, trying to fill the vacuum left in the space where the government and police dare not go. By splicing conversations with his taxista and the priests with different studies by UNICEF and other charity groups, two realities are made clear. The first is how a majority of the hardworking immigrants in these zones are given a bad name by the few ruthless slumlords; the second is the source of these same kingpins’ incomes- long lines of luxury cars roll in on the weekends to buy cocaine and other drugs to fuel upper-class Porteño parties in the rest of the city. Heading back to his own comfortable apartment in a taxi, he leaves the priests and poverty not too behind, obviously impacted by his trip.

First place in a race to the bottom

The third- and to me, the most critical- topic for the future of Argentina is one close to Petrella’s heart. As an educator, he takes a hard, honest look at how this country prepares its youth for the future.

The statistics aren’t promising. In the most recent 2012 Program for International Student Assessment, Argentine students placed 59 out of 65 overall. Most disheartening, though, was the teacher surveys attached to the exam, which paint a picture of the learning environment in classrooms. According to the survey, compared to the rest of the world Argentina has “the classrooms where students listen the least to teachers, where there is the most noise and where you have to wait the longest to focus on learning.” Petrella interprets that “this lack of discipline reveals a lack of respect for teachers (authority) and a lack of shared aims for classmates, forcing them to try to learn in an even more challenging context.”

Constructively confronting the ghosts of the past

Petrella’s last theme takes on one of the most complicated and emotional questions that has plagued Argentine society and politics ever since the return to democracy in 1983: how can the country move forward in the twenty-first century when it is still divided by the violence committed by both sides during the seventies and eighties, when thousands were killed, kidnapped and sometimes completely “disappeared?” While quick to praise the work of human rights investigations and the trials of military leaders involved in the large majority of the kidnapping, torture, and extrajudicial executions, he is equally distressed that the most recent administration has effectively granted immunity to leftist guerrillas that used terrorist tactics against the democratically elected government, causing some civilian casualties. In Patrella’s opinion, the efforts to date have merely anesthetized the gaping wound in society, instead of repairing it properly to allow for true healing.

Through a balanced approach that prioritizes reconciliation and progress over blame and punishment, Patrella cites world leaders like Nelson Mandela to emphasize that Argentina can only move forward once all factions make peace with the past.

Optimism in the face of apathy

The possible avenues for critics to attack Petrella seem endless: his alignment with Maricio Macri’s PRO Party; his time living and working abroad; his honest and no-holds-barred assessments of cultural cores of Argentina, from its fútbol to its education to its painful recent history. But for those who care about Argentina and its plight, reading Que Metan Todos is refreshing. In a society that is dominated by the noise of dubious statistics, the lack of true justice, and political campaign rhetoric that usually ends up in broken promises, Petrella has ideas, hope and a plan of how to make Argentina great.

The beauty of Petrella’s plan is found in its simplicity, inspired by Gandhi: Be the change you want to see in the world. In Argentina, that means it starts with the small things. According to him, Argentines must “be punctual, [stop throwing] trash on the ground, take care of public places, be friendly and respectful of each other, and break the prejudices that have brought up walls of distrust in our society.”

But changing a culture is easier said than done. Can Petrella be a change agent in Argentina? Near the end of the book, he mentions a favorite movie quote: “the true revolution is normality.” It shines through in his descriptive case studies, his plan for Argentina and most of all in his prose that he won’t give up trying. His time in office as a local legislator may not be the last you hear from Iván Petrella, who wants transform his nation and its people from international anomaly to greatness, a country with lots of potential and big dreams, but above all a place that would someday just be happy to be called normal.

A book review by Jared Wilhelm with is an Olmsted Scholar based at the Univeridad Nacional de Cuyo in Mendoza, Argentina